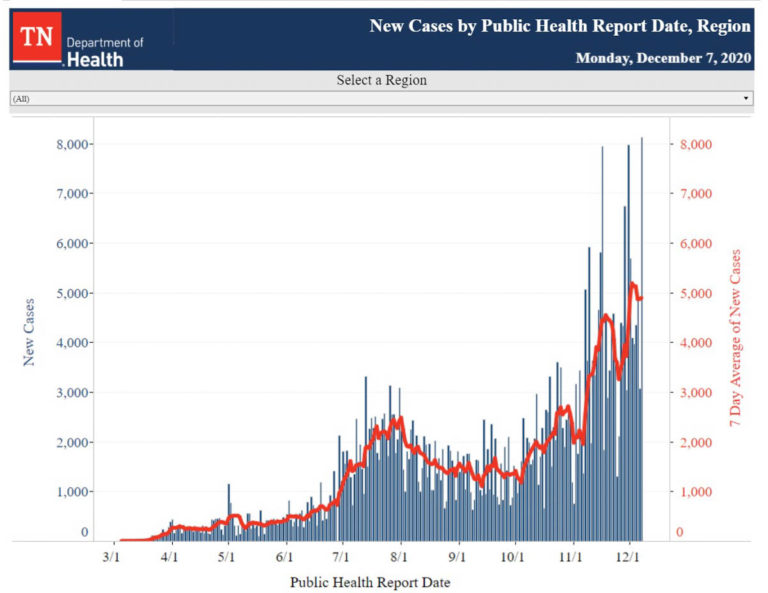 I’m coming at you a little sore, today. Not irritated, more like aching in spots where I haven’t had aches in a while. Urban Boy was assigned to work on bouncing a basketball for his virtual physical activity for the week. That led to running, dribbling, passing and all kinds of basketball moves I’ve never had. He had a blast. I think I have a pulled muscle. I hope there isn’t a pandemic shortage on Ben-gay.

The state of Tennessee reported a new daily record of 8,136 new cases yesterday. The new total surpassed the previous record of 7,975 set seven days earlier, on November 30. The state did report a sharp increase in testing for the day — but didn’t come close to the number of tests that produced the previous record, reflecting a rising positive test rate.

The addition of the 8,136 cases brings the state’s totals to 373,537 confirmed cases and 35,193 probable cases. 362,818 Tennesseans are considered recovered from the illness or inactive, while 40,903 are currently considered active.

For the day, the state reported an additional 66 deaths. Of note, the state crossed 5,000 deaths with a total of 5,009. Each thousand has accumulated more quickly than the one before through the pandemic as the rate of deaths has increased. The first thousand took about 4 1/2 months. This most recent thousand took 20 days. The seven-day average is now 58 deaths per day for the state, just below the record of 59 set on November 25.

45 Tennessee COVID-positive residents were admitted to the hospital yesterday, bringing the pandemic total to 12,638 hospitalized at some point during the pandemic. There are currently 2,563 COVID-positive Tennesseans, a new record. A month earlier, there were 1,511 hospitalized in the state. Of the 2,563 there are currently 645 in ICUs across the state and 324 on ventilators, both numbers near record levels. The most significant stress to facilities as a result is ICU bed capacity, which is currently at 9%.

As noted above, and as you would suspect given the number of cases reported, reported tests surged once more yesterday after several days of decline. The state reported results for about 42.2 thousand tests, bringing the pandemic total to almost 4.7 million tests given by the state. The daily number is in the higher range of test reported by the state for a day, ranking right around the top ten test totals reported for a day.

The positive test rate at such a high number of tests in the pool (which should reduce the positive percentage) remains the biggest concern. For the day, the state reported an 18.68% positive test rate. For the last seven days, Johns Hopkins University says the state has averaged 18.2%, the highest number since the testing program became established.

As is to be expected after the state reports high case numbers in their afternoon report, Knox County’s numbers are high the next morning. The Knox County Health Department reported a new high for cases for a single day, with 450 new cases reported. The number surpasses the previous high of 437 set a week ago.

With the addition of 450 cases, the county has had 21,178 confirmed cases and 1,236 probable cases reported. Of these, the health department is reporting 19,274 inactive cases and 2,946 active cases, though I suspect this is a similar error to the first data drop yesterday in which they failed to move the appropriate cases from active to inactive, so that number may be altered later. Dr. Buchanan (during the briefing) acknowledged there is a problem with this number.

The health department also reported an additional five deaths from COVID-19, bringing the pandemic death toll in the county to 194. Twenty-seven of these deaths have been reported in the first eight days of this month. Of the five deaths reported today, one person was between 64 and 75-years-old and four were above 75.

She began by discussing changes being made in contact tracing. Priority will be given to cases reported to the Health Department within six days but will continue to trace all cases among the oldest citizens and the youngest. This follow’s CDC guidelines to maximize the use of resources. She noted that contact tracing is not as useful at our current level of spread.

She noted that attention must shift to vaccination planning. She said people should quarantine when they have been exposed and should do so until they get their results. She also asked that people contact their contacts as quickly as possible. She noted that the website now includes a link to guidance regarding quarantine and isolation.

She said the “local situation is the worst we have seen, and the entire system is overwhelmed.” For that reason, she said the health department must decide what is most critical for them to do at this time. She insisted they are not “rolling back their response,” but we are at a critical turning point. She begged the community to do their part and to not give up.

Dr. Gray started with some numbers related to cases. He said the increase since November 1 has been “precipitous” and it is worse for December. He said there is a 50% increase in positivity rate since the spike in September. He said there were over 500 hospitalizations yesterday and another 77 suspected in area hospitals, a new record.

A quarter (roughly) are in ICUs and half of those are on ventilators. The increase is being driven by people over 50. He said the resources of the hospitals is “being stressed.” He said it continues to be safe to visit hospitals if residents need to do so. There is no reason, he said, to not get surgery or other help you need. They are beginning to consider deferring procedures that require an overnight stay, and more limits may come later, due to staffing issues. COVID patients are segregated and visitors continue to not be allowed. Supplies are adequate.

He said we have “an opportunity to be victorious,” if we do not give in and continue to maintain the five core actions. He said they anticipate being able to vaccinate some staff soon, and members of the community “after the first of the year.

Each daily report from the Knox County Schools continues to come with new records for active cases. The system is reporting 235 active cases, up from the then-record 215 reported yesterday. The 235 includes 161 students and 74 staff members.

1,146 students and staff are listed as recovered, while a new high of 2,723 are now in quarantine or isolation. The number in isolation/quarantine includes 2,399 students and 324 staff members. The number quarantined and isolated is a new record, as those have also been set daily in recent weeks. It reflects an increase of 553 from just the day before and is about 3 1/2 times higher than the final number reported before fall break.

Among the metrics being watched by the school system, teacher attendance is rated yellow, custodial support and substitute availability are rated red and the other metrics remain green for the day. Halls Middle School and Gresham Elementary were added to the list of schools switching completely to virtual education. They, like the other recent additions to the list, will not return to in-person instruction until after the winter break.