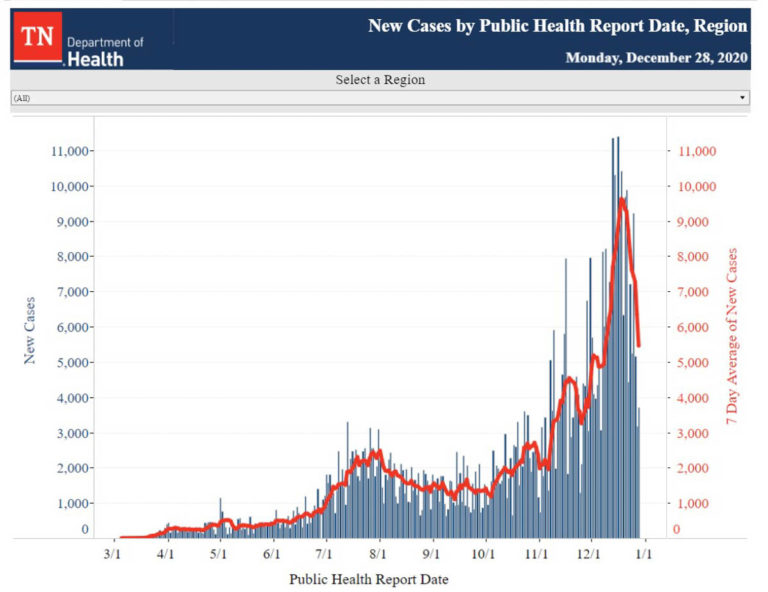 At least our quiet conversations are shifting from what we miss to what we’ll return to first in the new year. I honestly don’t see much reason for optimism regarding travel, parties, concerts until late summer or fall, at best, but meeting friends once we’ve all been vaccinated should be back on the table. Maybe a non-packed coffee shop will be up next. I think we’ll relish every tiny step.

The state and local data on cases continues to be skewed by the holidays, but the data on deaths and hospitalizations is returning to a level which makes a bit of sense given where we were before the holidays. I’ll keep reporting the numbers, but it seems to me that our true transmission situation may not become clear before then end of next week or the beginning of the week after.

65 additional COVID-positive Tennesseans were admitted to the hospital yesterday, bringing the total to 14,156 since the beginning of the pandemic. Hospitalization trends are resuming trends established before the holidays, with a record 2,990 COVID-positive Tennesseans hospitalized as of Sunday. Of these, 748 are in ICUs across the state and 454 are on ventilators. While there have previously been more in ICU’s, the number on ventilators is also a new high. 11% of ICU beds are currently available, as well as 13% of adult hospital beds.

76 deaths from COVID-19 were reported in the state yesterday, bringing the pandemic death toll to 6,588. After very low numbers reported last weekend (5 and 7), the last two days have seen numbers similar to those before the holiday. The seven-day average is moving back up and is now at 65 deaths per day.

The number of daily tests reported continues to be extremely low, with 13,344 reported yesterday, bringing the pandemic total to just over 5.5 million in the state. A 22.96% positive test rate was reported for the group of tests and Johns Hopkins University currently has the positivity rate at 21.3% over the last week.

Vaccination totals have not been updated for the state and remain at 53,258.

The reporting seems to continue to have an impact on Knox County case numbers, with a total of 162 new cases reported yesterday, the lowest daily number since November 26 (147), not coincidentally Thanksgiving Day. The 162 cases bring Knox County’s totals to 19,743 confirmed cases and 2,956 probable cases. 27,119 cases are considered inactive, while 5,268 Knox County residents are considered to have an active case of COVID-19.

An additional six deaths were reported today, bringing the pandemic total to 312. Of these, one person was between ages 45 and 64, while five were over 75 years old.

Dr. Buchanan chaired the meeting and thanked those helping get the vaccine to the community. She noted that it will be months before the general public gets the vaccine and that the state has not received enough vaccines to cover phase one. She said that counties may have different paces for reaching each of the groups.

She cautioned that lower testing volumes over the last few days are the reason for the lower case numbers. She said she expects the numbers to rise after New Year’s Day. She pleaded for people to continue not to gather and to follow the five core actions. She asked that everyone celebrate with their household only.