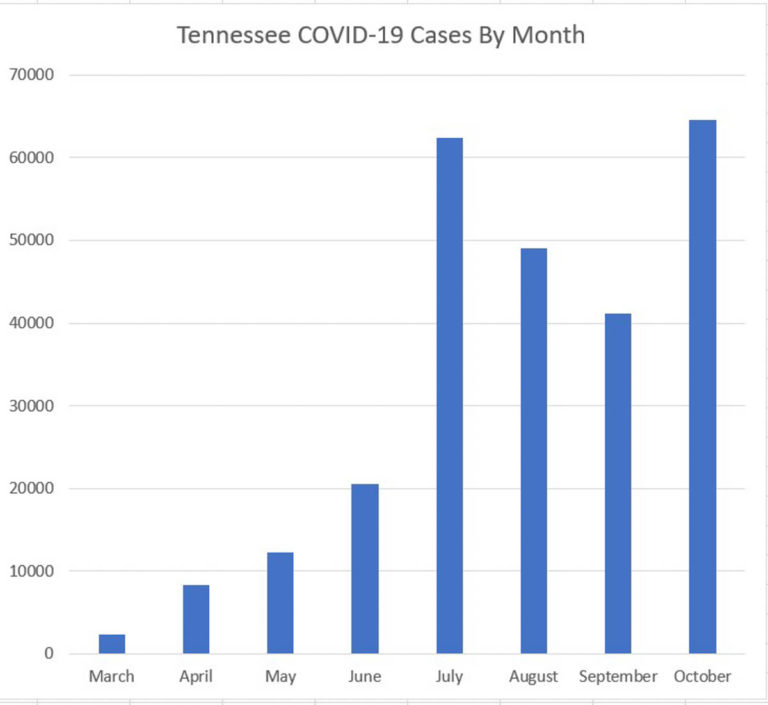 Once a month we take a look at the COVID-19 statistics by month. As readers pointed out early on, it is easy to get lost in day-to-day comparisons and charts. The numbers are naturally going to move up and down and it is difficult to see trends when the view is from so close. Back out a little and it adds some perspective to how we’re doing.

To start with cases at the state level, an unfortunate reality becomes obvious from simply a glance: Cases shot up during the month of October to their highest level of the pandemic. Further, it represented a reversal of a downward trend through the months of August and September. The 64,533 cases for the month were about 2,100 higher than the previous high set in July.

It is unclear whether the trend will continue — or whether it will continue to be documented. To start the month, the state reported one of its lowest test volumes in recent months, both on the final day of October and the beginning of November. For the above chart to be a perfectly accurate reading of the illness, we would need a steady and substantial amount of testing each month, something that has been elusive.

Unlike cases, prior to the month of November there had been no decline in deaths, though there had been a pause. Deaths for August (694) and September (700) were almost perfectly even and that yielded hope that we might soon see a decline. Unfortunately, the state of Tennessee set a new record in October with 899 deaths.

In social media parlor games, one of the current lines of logic is that deaths have declined by 80 to 85%. The thread of truth is some very excellent news, which readers of this blog have read about and discussed for several months: the survival rate for the illness is much higher than it was at the beginning. Any single person who gest the illness now has a substantially better chance of a positive outcome.

We’ve got much better understanding of who is at risk and when the illness becomes serious. We’ve learned to use steroids and remdesivir seems to help (there is some contradictory evidence). Also, unlike at the beginning in Italy and New York City, hospitals haven’t been overrun, so care can be better provided.

That said, the number of people dying is not currently declining. The rate of death per 100,000 cases is lower, but the number of cases are substantially higher. Here’s the recent breakdown, which I shared on FB last Friday night:

The monthly case comparison for Knox County surprised me when I added the numbers and saw the graph. It has felt to me as if our cases were on their way up, when the month-over-month comparison shows they slipped slightly from September (3,334) to October (3,252). The September numbers (we assume, though we can’t know how many UT cases are Knox County cases) were fueled by a surge in UT or, at the very least, large numbers of young people being diagnosed.

As Dr. Shamiyeh’s age-specific charts showed last week, the population most impacted by new cases has now shifted back to middle-aged county and regional residents. It’s what he had predicted might happen as the next wave due to spread from the younger people to their parents and others. The age differential is a concern because older people are more vulnerable.

The pattern and number of deaths reported in Knox County have been interesting from the beginning. One death in March was followed by four in April. The fact that we had zero deaths in both May and June still fascinates me. The best news there is that the bulk of our worst cases came after medical treatment of the illness improved, thus sparing us some of the pain seen elsewhere.

July was a wakeup call that we were not somehow immune to deaths and it remains our worst month to this point, with 34 deaths. We’ve essentially been up and down since, but we’ve not gone back to that level. October deaths numbered 21, which was a solid drop from the 27 reported in August.