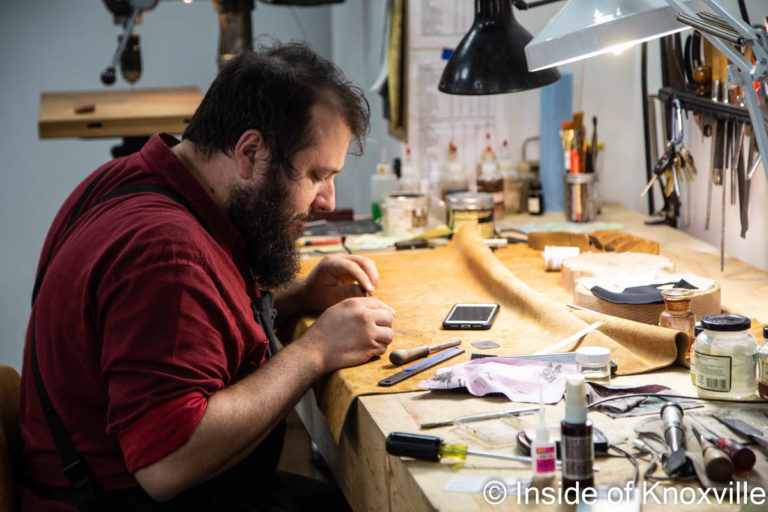 Knoxville Fine Violins has opened at 207 Clinch Avenue, continuing the trend of other businesses which have opened during the pandemic with an eye toward better days. Wesley Rule brings with him strong skills and a solid family reputation in wood working and instrument repair.

Born and raised in the area, Wesley traces his east Tennessee roots to the time before Tennessee was a state. His great-grandfather, Oscar Wilbur Rule, worked just off Market Square at Ledgerwood Piano, a long-since-gone music store, as a piano technician, inventing a hammer filer for the profession along the way. His grandfather, Josef Fletcher Rule, built custom homes and cabinets until he died. Wesley has some of his tools, including a band saw, in the shop.

More directly, Wesley’s father, Bradley, builds and repairs pipe organs. As a result, Wesley has a rather unique connection to downtown, in that he has crawled around in the nooks and crannies of most downtown church organs. His company, B. Rule and Company in New Market often gets the call when a downtown church organ needs a bit of repair.

Wesley, planned to study history, with little intention of following the family business. A decade ago, as he took violin lessons, he became fascinated with the instrument, noting the complete absence of straight lines in the structure and began considering how one might build such a thing.

He became fascinated enough that he stopped his plans with history and sought out violin making schools, learning there are just three in the country. He moved to Salt Lake City and enrolled in the Violin Making School of America, and entered their three-year program. He describes the program as “very intense,” and while he was there, the school added violin repair and he was among the first to graduate with a focus in both making and repair.

After his graduation in 2012, he worked a freelance around the country with violin makers, often working for free in high-end shops to further cement his skills. In August of that year, he connected with the Little Rock Violin Shop in Little Rock, Arkansas and became their shop foreman. Until earlier this year. While there, he built their rental program from scratch and did repairs for members of the Arkansas Symphony Orchestra in Little Rock.

But all the while, the Strawberry Plains native and Carter High School graduate felt the pull of east Tennessee. All he had to do was convince his Arkansas-born wife Lauren to uproot from her family and move their three children five-hundred miles away to start a new business during a pandemic. He’d always thought Knoxville could use an accessible, affordable full-service violin shop and she eventually agreed.

The process started before the pandemic hit. They placed their Little Rock home on the market and as it was beginning, they considered taking it off again. As fate would have it, others had much more rapidly taken theirs off, causing a shortage of houses on the market and theirs was quickly purchased.

Their course decided, they arrived in Knoxville on July 3 determined to move forward. They scouted locations from north Knoxville to south Knoxville and downtown. Determined to find a location in a historic building, they struggled with a tight real estate market for small retail spaces. He spotted the space at 207 Clinch Avenue as he rode around searching and found it to be a perfect, if slightly snug, fit at 1200 square feet in the side of the original Farragut Hotel (now Hyatt Place). They signed a lease very quickly, knowing they’d found their spot.

It’s been a family affair with the three children coming to the shop while their father prepared the space. Wesley’s father built the violin rack. Lauren is handling the business and social media side of things and Wesley is focusing on making and restoring instruments to build his inventory in anticipation of more business once the pandemic eases.

Wesley can repair any instrument in the violin family: violins, violas, cellos, and double bass. As he describes it, like his father before him, he’s at the “cutting edge of medieval technology.” He’s willing to work on any instrument, from a student level instrument to the most valuable. He also offers a wide range of instruments for sale, “from $300 or $400 to $10,000.” His hand-crafted instruments are at the top end of that range and he currently has an Italian violin he has restored, which is in that top range.

He also rents instruments to anyone taking lessons and it is here that he distinguishes himself. He fits each of his student violins with professional set-ups. It’s something he did in Little Rock and was greatly appreciated by teachers because it is not typically done on student instruments. For rentals he has a baseline economy model all the way to a high-grade rental.

Wesley has made a lot of progress after occupying the space just two weeks ago. He has already found his way to working with some members of the Knoxville Symphony Orchestra. He’s begun reaching out to teachers in the area. And he’s working on instruments to be ready with inventory when you walk in the door.

You can stop into the business at 207 Clinch Avenue Tuesday through Friday from 10am to 6pm or Saturday from 10am to 2pm. There are 30-minute spaces at the door and they are within feet of the State Street Garage. You can also check for more detail on the website or follow their progress on Facebook.