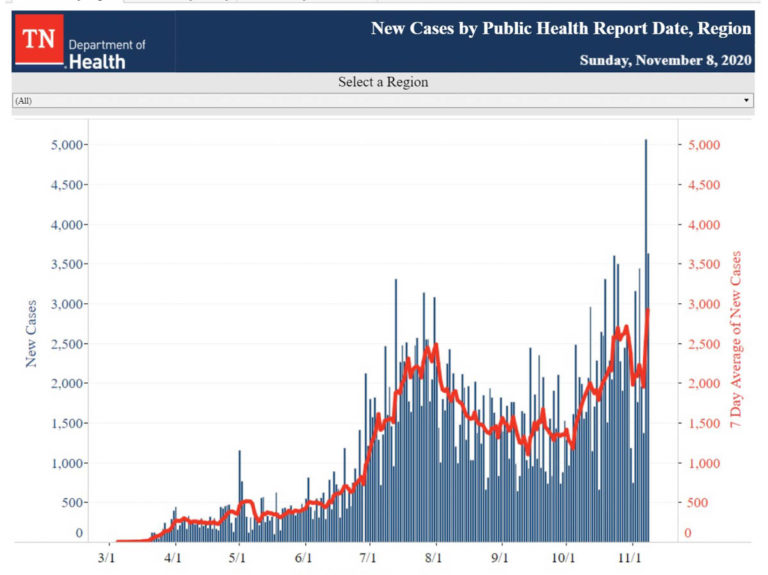 I hope your weekend was a safe and happy one. It was certainly interesting as the AP called the presidential election, President-elect Biden and Vice President-elect Harris made speeches, and President Trump continued to claim election fraud and refuse to accept the results. It makes for an interesting week or weeks ahead. I hope they are peaceful as we sort this out and move forward.

One thing we can now say with certainty that President Trump got wrong was when he said the virus would disappear after the election and “on November 4 you won’t hear anything about it . . .” I assume that his claim was intended to perpetuate the idea that the virus and the media reporting on it is political and intended to damage him. The shocking numbers below tell a vastly different story. The virus does not know either Trump or Biden.

Maybe we can now stop with the political disagreements about a virus and simple measures like masks. What we do in the next 60 days will make a tremendous difference in how many Americans, Tennesseans and Knox County residents die. Death rates are going up at every level and we do not have more time to waste. We have decisions to make. If we love our country and fellow citizens, we need to do our part. It’s not about you or me or Trump or Biden.

Yesterday, 472.7 thousand were diagnosed and over 5,800 died. Last week, those numbers were 437.3 thousand cases and 5,300 deaths, showing the sharp upward world-wide trajectory. Only three weeks ago, the world recorded its first day over 400,000 cases. For the week just ended, there were only two days under 500,000. New records were set three consecutive days, culminating in a new daily record of 623,365. Three days last week, the number was over 600,000 new cases each day.

The five countries leading the world in deaths yesterday remained the same as a week ago with one exception: Italy replaced Russia on the list. Note that my data comes from Sunday each week, a low point for most country’s reporting. Spain, for example, simply doesn’t report. After dropping a bit, the U.S. resumed its position as the country with the most daily deaths: the U.S. (512), India (491), Mexico (485), Iran (459), and Italy (331).

Looking at the broader group of countries reporting at least 1,000 new cases for the day, the trends remain the same. 51 countries exceeded the number yesterday, up from 48 last week on the same day. Of those, 20 are European countries, 17 are Asian countries (ten of these are in or near the middle east), 6 are in South America and 4 are in Africa.

The best news of the week came out this morning, when Pfizer announced that early returns on the trials for their vaccine shows that it is effective at an eye-popping 90% rate. If this holds, it will be a tremendous step. Unfortunately, we can’t line up for the shot any time soon. It will likely be the end of this month before the company is finished with the trial and applies for emergency authorization from the FDA to approve the vaccine. Further, the company projects only 50 million doses would be available by the end of this year – enough for 25 million people worldwide. In 2021, it projects it could produce as many as 1.3 billion doses, or enough for 650,000,000 people, well under 10% of the world’s population.

Europe is dealing with a COVID-19 outbreak among minks. While Sweden has gotten a lot of attention, Finland has been a quiet success story, with only 356 total deaths during the pandemic and about 20% of the level of infections seen in other European countries. Credit goes to trusting the government and using tracing apps. There are lockdowns of various degrees across Europe, but Italian doctors are pleading with the government to institute another complete lockdown, saying the health system there will soon not be able to cope with the numbers.

About 10.3 million people across the U.S. have been diagnosed with COVID-19, an increase of about 800,000 since last week. Just under 6.5 million people are considered recovered, while about 3,570,000 people currently have active cases. There are almost a half million more active cases now than was the case a week ago. 243,807 Americans have died of the illness, including 7,302 over the previous week.

The U.S. continues to lead the world in cases, with the seven-day average now at 111,226 per day. A week ago, the daily average was 82,715. As has been the case in previous weeks, daily records continue to be set. Five different days this week saw higher new case counts than the previous single-day record, which was set the previous week. The U.S. is the only country to have diagnosed 100,000 cases in a day and now it has done so six of the last 10 days and, most recently, five straight days. The 132,541 cases reported on Friday is the new world record for a single day.

The U.S. has the highest case totals in the world, with about 1.7 million more than second-place India. It also has the highest death totals in the world, with about 80,000 more than second-place Brazil. Per capita, the U.S. moved back up to 8th among countries with 1 million or more in population. In per capital deaths, the U.S. continues to rank 8th among modestly to heavily populated countries. The U.S. is second to China in total tests given and is 7th in testing per capita.

The increase in death rate noted last week has continued and grown steeper. Two weeks ago the U.S. was averaging 818 deaths, last week it was 851 and the current average deaths per day in the U.S. has risen to 979 per day. This is the highest average death rate since August 24. Yesterday, the states reporting the most deaths were Illinois (50), Texas (39), Indiana (39), Minnesota (31), and Missouri (24). The list continues to rotate, with only Illinois and Texas on last week’s list.

Yesterday, seventeen states reported multiple thousands of new cases and thirty-one reported at least 1,000 – this on one of the lowest reporting days of the week. Last week, those numbers were thirteen and twenty-seven. Last week I gave the numbers for the states reporting at least 3,000 new cases for the day and that list included six states. Yesterday, thirteen states reported at least 3,000 new cases for the day, Tennessee among them. The top five each reported 5,000 or higher: Illinois (10,009), Florida (6,820), Texas (6,584), Minnesota (5,908), and Missouri (5,571).

In per capita cases, Mississippi and Alabama were surpassed by Nebraska and Wisconsin. The top five states in order for total cases: North Dakota, South Dakota, Iowa, Wisconsin, and Nebraska. The leaders in per capita deaths remain the same: New Jersey, New York, Massachusetts, Connecticut, and Louisiana. Tennessee ranks 9th in cases per capita and 26th in deaths per capita, having dropped a spot in each comparison over the last week.

Remarkably, with the stunning numbers of cases and deaths we are seeing in the U.S., coverage dropped dramatically last week as the nation held its breath watching election results. President-elect Biden named a COVID-19 Transition Advisory Board to begin preparation for dealing with the pandemic. Optimally, it would be working in concert with the current White House Task Force, but that doesn’t appear likely. A study reported today in the Journal of the American Medical Association finds that hydroxychloroquine does not help COVID-19 patients.

Housing Secretary Ben Carson has tested positive for COVID-19. Republican Governor Gary Herbert of Utah has become the latest governor to issue a state-wide mask mandate. Utah has also cancelled all extra-curricular activities, including sports for public schools and will require any college student taking at least one in-person class starting in January to be tested weekly.

We may be seeing a pattern of few, if any, deaths being reported in the state on Sundays. Last Sunday, the number was zero and yesterday it was five, even though the daily average is now 35 per day, down one from Friday’s 36. The 49 deaths reported on Saturday qualifies as the 6th highest single-day number since the beginning of the pandemic.

Total numbers of cases are now 264,340 confirmed and 17,511 probable for the state. 250,818 cases are now considered inactive and 9,927 Tennesseans currently have the illness. COVID-19 deaths in the state now total 3,595 since the beginning of the pandemic.

Testing, as you might guess from the high case numbers, was robust over the last two days and weak on Friday. The Friday, Saturday, Sunday test totals were roughly 11.3K, 45.2K, and 36.5K. The first is extremely low, the second is the third highest single-day total, yet. For yesterday, the state reported a 9.63% positive test result and for the last week, Johns Hopkins University reports a 10.8% average positive test result. The state has administered nearly 3.9 million tests and is 12th per capita on that metric in the U.S.

Since the last report, the Knox County Health Department has reported 133 new cases for Saturday, 167 new cases for Sunday and 165 new cases for today. Today marks the 10th consecutive reported day over 100 cases (on November 1, no report was given). The only 100+ span that was longer was 11 days in July.

The current total number of confirmed cases for the county has risen to 14,310 and the probable cases total an additional 754. 13,466 cases are now considered inactive and 1,479 Knox County residents currently have an active case of the virus. It is the largest number of active cases reported since the calculation method was altered on October 1.

The state reports that Knox County currently has an average 12% positive test result rate, down from the 13.9% reported on Friday.

The University of Tennessee is reporting 73 active cases among students and staff, a number largely in keeping with recent totals. 1,816 students and staff have recovered and 18 additional cases were confirmed over the weekend. Quarantine and isolation numbers are down slightly to 352, including 300 students and 52 employees. The university has traced a new cluster to an off-campus Halloween party.

The Knox County School System updates its numbers at 4:00 pm each day, so the most recent numbers at this moment are from Friday. At that time, the schools reported 78 active cases, one shy of the highest number reported for the school year. Of these, 56 are students and 22 are staff members.

601 students and staff have recovered from the illness and 1,432 are currently in isolation or quarantine. Those in quarantine or isolation include 1,296 students and 138 staff. This is the largest quarantine/isolation number since the beginning of the school year. It is also, likely, what has caused the teacher attendance metric to turn yellow from green. Custodial attendance and substitute availability remain red.