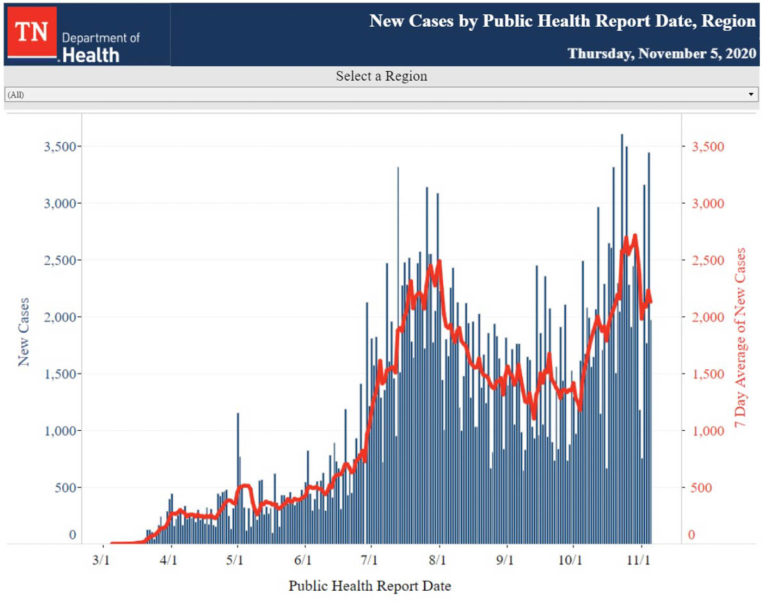 We made it to Friday through an incredibly stressful week for many of us. Whether your stress came from watching election coverage or watching COVID-19 numbers repeatedly top 100,000 new cases a day in the country, it was definitely a hard week to be chill and it’s not likely to get easier this weekend on those two fronts. Take a walk. Put the phone down. Turn off the television or watch football. Give yourself a mental health break. And please remember to stay safe as the virus heats up more than ever.

The state of Tennessee reported 1,969 new cases for the day, bringing the totals to 255,720 confirmed cases and 16,051 probable cases since the beginning of the pandemic. 243,492 people are considered to have come through the illness and 24,770 currently have active cases. The current seven-day average is 2,127 per day, slightly lower than the day before.

31 additional deaths were reported for the day, bringing the total deaths in the state to 3,509. The average number of daily deaths in Tennessee is currently 36 per day.

Hospital capacity state-wide seems to be in a relatively strong position, with current available beds at 17%, available ICU beds at 13% and 68% of ventilators available. It should be noted that some parts of the state are starting to report a strain, generally related to personnel. It should be noted that while capacity is adequate across the state, there could be local issues, such as Ballad Health which operates in upper east Tennessee. They report the need for 350 nurses due to sidelined workers and a surge in COVID-19 hospitalizations.

The Knox County Health Department reported 104 new cases, bringing the pandemic totals to 13,845 confirmed cases in the county and 712 probable cases. 13,035 people have recovered, and 1,409 people currently have active cases.

The number of COVID-positive Knox County residents currently hospitalized continues to be a concern, with the number now up to 72, the third highest daily total of the pandemic, second to two days about a week earlier. It brings the total hospitalized to 495 since the beginning of the pandemic.

For the fourth day out of the last five, two additional COVID-positive Knox County deaths were reported for the day. Of these deaths, one person was between the ages of 64 and 75, while the other was over 75 years old. 53 of the deaths in the county have been 75 and below and 58 of the deaths have been 75+, while 38 have been female and 75 have been male.

The state reports positive test results for the county are currently running 13.9%.

Dr. Plowman confirmed the above numbers. Last week 974 students were tested, with over 73% participation. 9 of the 974 tested positive for the virus. It was noted that across the county and state growth rates are rising, unlike that on campus. They urged students to continue to be careful. They continue to urge students to be tested before returning to their families. Testing will increase and will become a regular event in the spring. Socially distanced graduations are being planned for prior to student departures for Thanksgiving.

The number of active cases in Knox County Schools includes 51 students and 26 staff members, for a total of 77. This reflects an increase of three from the previous day. The total is tied for the third highest single-day total since the beginning of the school year. 589 members of the schools community have recovered.

There are 1,206 students and 149 staff, for a total of 1,355, in quarantine or isolation. This is the highest total number of the school year. Even with those numbers, student and teacher attendance remains rated at the green level. Custodial availability and substitute availability continue to be rated red.