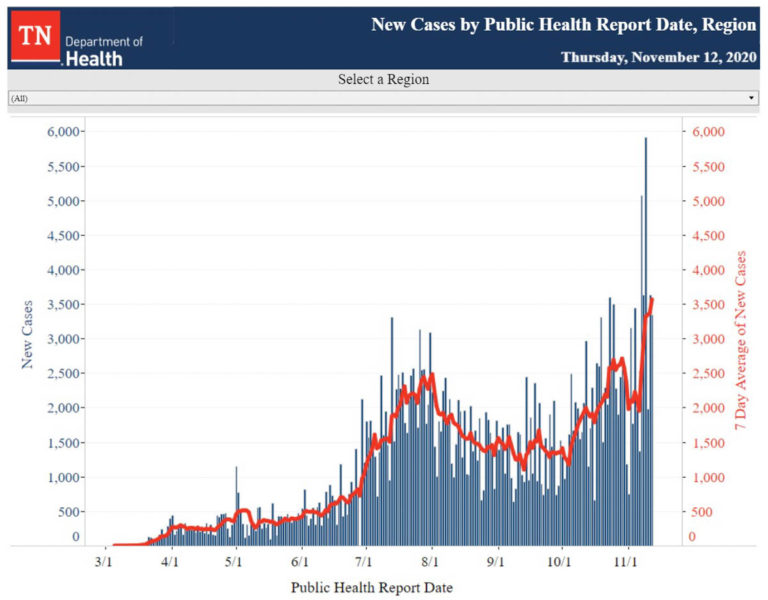 Welcome to Friday. I really wish someone had thought to scratch any Friday 13ths off the calendar before this happened. What would bad luck even look like in 2020? But it’s a sunny, cool day and tomorrow looks to be the same. Let’s grab ’em while we can. Please keep them safe.

The daily total, which might have led the country on a given day several weeks ago, only landed the state in 17th place for the day as the U.S. shattered all records for new cases and the top states crossed 10,000 cases for the day. Tennessee is now averaging 3,565 new cases per day.

The state reported 27 additional deaths from the illness yesterday, bringing the pandemic total to 3,788. The total ranked 15th in the country as deaths are increasing in many states. For the last seven days, Tennessee has averaged 40 deaths per day from the virus.

55 additional COVID-positive Tennesseans were admitted to the hospital, bringing the pandemic total to 10,950. As is the case across the country (yesterday the U.S. set a record for single-day hospital census from the virus), each day brings new records for the state to the number hospitalized at any given time since the beginning of the pandemic.

There are currently 1,750 COVID-positive Tennesseans in hospitals across the state. Of these, 497 are in ICUs and 216 are on ventilators. Two of the three numbers are up from yesterday: 1,714, 479 and 222 yesterday, respectively. A month ago the numbers were 1,086, 307 and 148. Capacity at a state level appears adequate at this time in each category, with ICU beds the tightest at 11% availability.

The number of tests reported by the state dropped yesterday to just over 21,000 from close to 30,000 the previous day. The state reported a 13.46% positive test rate for the day and Johns Hopkins now has the state at an 11.6% seven-day average. The average continues to be higher than it has been since early-to-mid April.

The Knox County Health Department reported 161 new cases for the day, marking the fourteenth consecutive day over 100. The new pandemic totals for the county are now 14,961 confirmed cases and 810 probable cases. 14,159 people are considered to have inactive cases, while the active number has dropped to 1,484 from yesterday’s 1,646.

A total of 514 COVID-positive Knox County residents have been hospitalized and 75 are currently in the hospital. The number currently hospitalized has remained in the 60s or 70s for several weeks. The pandemic peak of 78 was reached three days ago.

The state is reporting an 11.6% positive test rate for Knox County over the last seven days.

The number of active cases, though relatively small, continues to steadily rise among students and staff of the University of Tennessee. Today, they are reporting 97 active cases, up from 89 yesterday and the highest that number has been since September 26.

13 new cases were identified yesterday, and 460 are now in quarantine or isolation. Of these, 65 are employees, 141 are students on campus and 254 are off-campus students. The 460 represents the highest number in quarantine or isolation since September 23. Of interest is the fact that on that earlier date the student distribution was much more even between off-campus and on-campus students.

No clusters have been reported since the October 31 off-campus party.

UTK Briefing: The Chancellor reviewed the numbers and urged students to make a plan for departure in a week-and-a-half. She said the plan should include getting a flu shot, taking a COVID-19 test and gathering all materials needed for finals. Dr. Gregg reminded students that, as numbers are rising, it’s important that students remain vigilant and pointed out that getting a diagnosis at this point would alter Thanksgiving plans. They encouraged everyone to look at and follow the CDC travel suggestions and Holiday Celebrations and Small Gatherings recommendations.

Active cases in Knox County Schools increased from 79 cases two days ago to 88 cases reported yesterday afternoon. The new total, representing 26 staff members and 62 students, is the highest single-day number of the school year. So far this  year, 652 students and staff have recovered.

1,448 are in quarantine or isolation, including 161 staff members and 1,287 students. This number is down slightly from yesterday’s, 1,462, but remains near the pandemic high of 1,589 set five days earlier.

All metrics remain green, with the exceptions of custodial support and substitute availability, both of which are currently red.