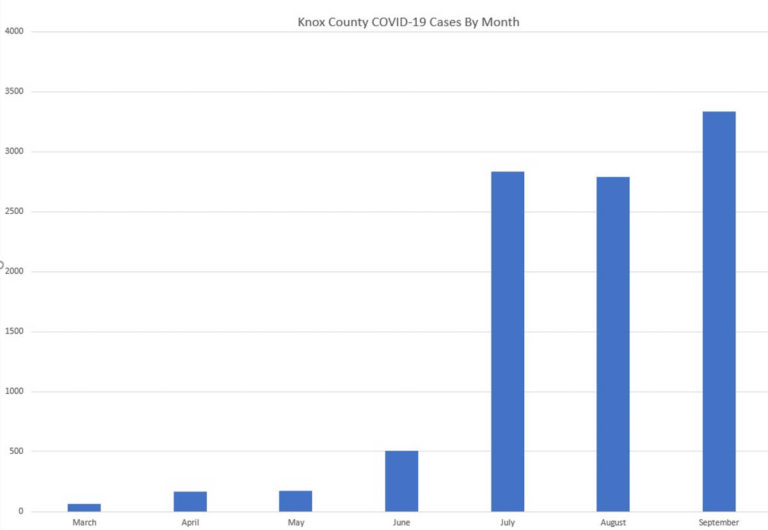 In recent months, after requests from readers, I’ve put together charts reflecting cases and deaths for the state and county by month. In the early stages of the pandemic, when we thought in terms of days or weeks, as opposed to the seven months that have now passed. We had no idea how long the disruption would continue. As the days became weeks and months, the daily charts became messier. Additionally, daily changes don’t mean as much as monthly changes. It’s sometimes easier to see trends from a distance.

The Tennessee cases, as graphed by months, tells a very interesting story. The state was clearly hit very lightly initially. In a state with nearly 7,000,000 people, seeing fewer than 10,000 cases the first two months, yielded the feeling that the virus was a New York issue, not so much a Tennessee issue.

We crossed 10,000 for the first time in May, nearly doubled that in June and, certainly by the explosion of cases in July, we began understanding the virus was very much here. In Nashville and Memphis initially, it soon spread to less populated counties. For the state, July was the peak of reported cases, and August, and to a lesser degree, September, found cases trending downward.

We subsequently learned that, as is the case across the U.S., testing numbers were trending down – a trend that continues in many places. That some of the reduction would come from people avoiding testing was not something I saw coming, nor do I think it was widely anticipated. Given the loss of income from quarantine, it might have been something to anticipate.

Basing a projection on the current rate of cases for the first seven days of October (not necessarily reliable), we would hit 50,114 cases by the beginning of November. If that came to fruition, it would mean a reversal of some of the drop, but it would not reflect a return to levels of our worst month.

Monthly deaths for the state do not follow the same trend as cases and, surprisingly, do not follow national or international trends. Deaths in the state took a leap in April, though the total of less than 200 in the state meant most of us did not know anyone who had died of the illness. As cases rose, so did deaths, but as cases peaked in July, deaths continued increasing.

It’s a bit of a puzzle that, as treatments improved, the age of those infected declined, and cases declined, deaths continued to increase, though the increase from August to September was razor thin (694 to 700). I haven’t seen this analyzed and would be very interested in hearing from anyone who has. October is, unfortunately, off to a worse start, with current rates producing a projection of 833, which would be the most deadly month in state, so far.

Interestingly, Knox County does not mirror the state. As each state has had its own set of peaks and valleys and time tables with the virus, the same is true with counties. The larger metro areas in Tennessee were hit hard earlier than Knox County. Additionally, our trend hasn’t declined. In the months of March, April, and May it was easier to find people who believed the virus wasn’t coming to Knox County than to find people who knew someone who had had it. Remember when the ultimate shut-down line on social media was “Do you know anybody who has had it?”

June changed the perception slightly, as cases nearly tripled. Still, the number was low. When July presented more than five times as many cases as June, it became clear we would have to deal with the same reality as other cities and states in the country. August saw a slight decline, though noting like the decline in state numbers from July to August. September, likely driven by University of Tennessee numbers, displayed significant increase over August.

Based on the rate of cases for the first eight days of the month, we would project 2,596 cases by the beginning of November. If we’re able to hold this pace, we’d have the lowest number of new cases since June, almost 10% lower than July (2,834). Will we maintain this rate?

The graph of deaths in Knox County is, perhaps, the strangest of all. March only produced one death, while April produced four. If we thought the growth would be exponential from there, we were proven wrong when there were, incredibly, no deaths in May or June. It felt as if Knox County had some special immunity. During this phase, numerous posts on social media ridiculed the number of deaths relative to other deaths in the county. It didn’t last.

Suddenly, in July, with the increase in cases came an increase in deaths, with 34 deaths, nearly seven times more than the total of the previous four months. To this point, that was our worst month for deaths. In August, deaths declined to 19, before rising in September to 27. While the total remains small relative to other places, the erratic chart shows changes can happen rapidly.

There has only been one death reported in Knoxville in the first eight days of the month (I think Charity misspoke in the press conference earlier today when she said there had been 8 deaths in the last seven days – that should have been the last two weeks.) Keeping that pace, would mean four deaths for the month, returning us to rates similar to the earliest days of the pandemic. One concern in that bright hope: We currently have more people hospitalized than at any point during the entire pandemic.