Dr. Souza acted as chair in the absence of Dr. Gotcher. Mr. Sanders joined the group from the Knox County Law office. All other members were present. The meeting began with a public forum. Members of the public, allotted three minutes each said the following (edited for the gist:

Two others who were scheduled to address the board did not attempt to log in. Dr. Buchanan commented about the allegation of PCR inaccuracy. She said it is reliable and it can’t amplify something that isn’t present as Dr. Cunningham stated. She said it more frequently produces a false negative than a positive.

Ms. Roma asked if this was the test used across the state and country and why there would be pushback or confusion. Dr. Buchanan replied it is what is being used across the world and that she isn’t sure why there is pushback, while acknowledging that it is complicated to understand.

Dr. Matt Harris, an economist at UT, joined to give information based on the intersection of health and economics, his academic focus. He said any action seen by economists is viewed via benefits and costs. He detailed the governmental response and private sector response. He noted that economically, some sectors have boomed and others have suffered. He said that retail sales, including gardening supplies and building supplies are all up. Sales tax receipts are up by 13% in Knox County. Unemployment is up, but below the state average.

Concerning what to do next, it would be best to have a cost-benefit component, but that may not be possible in real time with a new virus. He noted that personal decisions resulted in 75% of the reduction in retail traffic. It exceeds the impact of mandates. He said the function of guidance is the impact it has on personal behavior.

If we loosen restrictions, he said case counts will increase and that will produce many people engaging in avoidance behavior, and the virus should be contained. He pointed out that you can do business with a mask on, but if cases are high and everyone is afraid and stays home, business will suffer. He said if mask use is made optional, it will reduce mask usage.

She expressed concern over the recent high hospitalization numbers and ICU numbers. She said they anticipate an increase in deaths as a result. The seven-day average for positive tests is now 9.67%. She also asked the board for help encouraging people to cooperate with investigations.

Dr. Shamiyeh gave his report (the charts pictured here are his). He started with the hospital census which he says is a large concern over the last two weeks. He reminded the board that a concern with so many infections among young people in recent weeks was whether that would “cascade” to older age groups and indicated that appears to be happening. He noted that due to reporting differences, the weekly hospital numbers, generated by the state, are not as useful as the hospital census data, which is generated locally and directly from the hospitals.

Dr. Shamiyeh indicated there was a discussion among the hospitals about the meaning of shifting to red. They agreed they would only do that if they felt that the census has reached a number at which the hospitals cannot provide ordinary care. They are not at that point and emphasized that anyone who needs help should not hesitate to get the help they need from a hospital. He said staffing issues loom larger than space when talking about being able to provide care.

Dr. Shamiyeh said that most of the COVID-positive patients are admitted with difficulty breathing, they are not admitted for another reason – like a routine procedure – and then discovered to have COVID-19.

Dr. Gregg reported for UTK. He gave the current numbers (reported earlier). Of the ROTC cluster, two tested positive, but 26 were considered close contacts. 671 students were tested last week through pooled testing and 46 were referred for further testing. 11 ultimately tested positive. Participation rates were not good and make up tests were given to 455 students, who were told they must participate. 12 of these were referred for follow-up testing.

Dr. O’Brien asked if there were incentives to students for them to be tested. He said that is being considered, but is complicated and they are looking at what other universities are doing. Dr. Hurt asked if the trend of avoiding testing is happening at other universities. He said that it is common across the SEC, the schools with which they most often communicate. Dr. Shamiyeh asked about the possibility of having all students tested before they return home for the holidays. Dr. Gregg said that the state is only going to allow them to “encourage” it.

Ms. Wagoner gave an update on the Knox County Schools, stating that there is no data this week. It will be updated on Monday. Dr. Buchanan asked if Ms. Wagoner saw resistance to testing or contact tracing due to a wish not to quarantine. She said yes.

The group discussed metrics that might be used to determine a loosening or increasing of restrictions. She said after taking to Roberta Sturm, KCHD epidemiologist, she determined each benchmark should cover a 28 day period, whereas it was 7 days before. She presented the charts you see here which show our historic data in relation to the escalation or de-escalation cutoffs. She noted that we are above the cutoffs for further action and asked the board what kind of response they would have to that fact. She said if we are going to use metrics, we should use them.

Dr. Shamiyeh said testing volume may be a hard one to nail down and that impacts positivity rate. He added that it is difficult to add absolutes and questioned whether the cutoffs are absolutes requiring action or are they entry points for discussion. He asked whether the numbers might be made slightly more generous so they are achievable locally. Dr. Buchanan said she agreed, though the cutoffs were White House Task Force recommendations.

Dr. O’Brien said he would be comfortable with the more generous numbers and that the metrics would be guidelines, not strict calls for actions. Dr. Buchanan suggested that testing volume could be dropped as positive test rate gets at that indirectly and she voiced support for having them be guidelines, not mandates for action. Dr. Shamiyeh asked if they might not move back to seven days as a guideline if they made the numbers more generous.

Dr. O’Brien wondered if there might not to be special pushes to test. Dr. Buchanan said she doesn’t know how her staff could do it. She also noted that physicians are only testing symptomatic people as insurance will not pay otherwise. She said the Health Department has cut back on drive-through testing because it requires more staff. 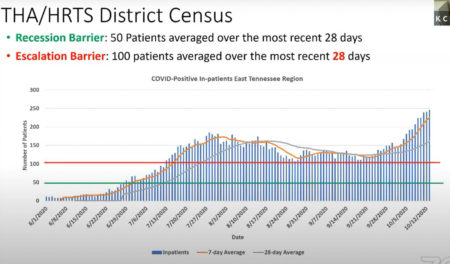 Regarding the hospital metric, Dr. Shamiyeh said staffing is a concern and, for example, a cluster of cases among a nursing group could make adequate staffing levels change rapidly. He said a delay in setting the metrics would give hospital staff a chance to discuss the hospital portion. He also said he feels that there should be a component, when in yellow, indicating if the metric is rising or falling.

The issue was deferred for further discussion in two weeks.

Dr. Souza reviewed a study published this week by the CDC. The study examined the impact of mandates in Arizona. It showed the mandates worked and made an impact in generation of new cases. She noted that she got emails today regarding masks not being required at polling places and repeated that the Board is not allowed to dictate mask usage at polling places.

The group discussed the face covering mandate. Dr. Drake said she voted early today at Downtown West and everyone was wearing a mask inside and out.

The next discussion was on the 11pm curfew for restaurants and bars. Dr. Buchanan said they have had 12 complaints and KPD has had nine. No one has been cited. There are repeated complaints about the same locations, but they are few. Most places are complying. Dr. O’Brien noted that the order was for 11pm and few restaurants stay open after that hour. Ms. Roma reminded people to call 311 if they have complaints.

Dr. Shamiyeh said that the numbers in the hospital have surprised him and he does feel the younger people who became infected spread it to older citizens who are now hospitalized. He said since he was surprised with how high the current numbers are, he’s not confident in making predictions. Dr. O’Brien said the curfew doesn’t seem to have made an impact and questioned whether spread was still primarily coming from small gatherings.

Dr. Buchanan said the clusters are typically around social gatherings, but that bar curfews or closures have helped in other locations. She pointed out that we could be worse off if we didn’t have the restriction.

A motion was made to extend the curfew for two more weeks. All present except Mayor Jacobs voted in the positive and the mandate is continued.

The group size mandate also was set to expire. Dr. Drake made a motion to extend it by two weeks. It passed with all present voting yes, with the exception of Mayor Jacobs.

They modified their schedule, as Veterans day and Thanksgiving interrupt the two in November. Dr. Shamiyeh said he would not be comfortable having more than two weeks between meetings as the data can shift quickly. Dr. Hurt agreed that three weeks is too long. She questioned whether they might meet one week after the next meeting and then resume two weeks, the 4th and 18th being the meeting dates for November. They decided to discuss it again in two weeks.

It was noted that the governor’s allowance for virtual meetings expires at the end of October and County Commission may also be considering changing the ordinance relating to the Board of Health, preventing them from meeting virtually. The County Commission is discussing two resolutions in their next meeting. One resolution would create an advisory board on health and the economy. Dr. Buchanan said she did not understand how that group would interact with boards already in place.

The other resolution would put specific language that required the Knox County Board of Health to meet in person if the County Commission does so. They would also be required to have public forum in the same way as County Commission. Councilman Kyle Ward proposed each resolution.

Dr. Hurt asked how that can be changed or why it would be changed. The Board has adopted their own set of rules. Mr. Sanders said the resolution, if passed would be a law and would supersede their rules.

Dr. Shamiyeh asked if they could use their online forum (which is open to the public to view) for discussion of metrics over the next weeks. Mr. Sanders said they likely could not based on a recent ruling that that method is only available to elected bodies, not appointed bodies.

Dr. Shamiyeh thanked the Health Department for their continued press conferences as he feels it is important to the community. He initiated a discussion of what the board would actually do if they started following the metrics. Dr. Buchanan said there have been a range of responses across the state. She noted that shut downs are effective, but the impact on the economy is drastic, but at the same time, massive hospitalizations and community fear would have the same impact, so there aren’t great answers.

On that note the meeting adjourned. The entire meeting 3 hour meeting is available below for your viewing pleasure.