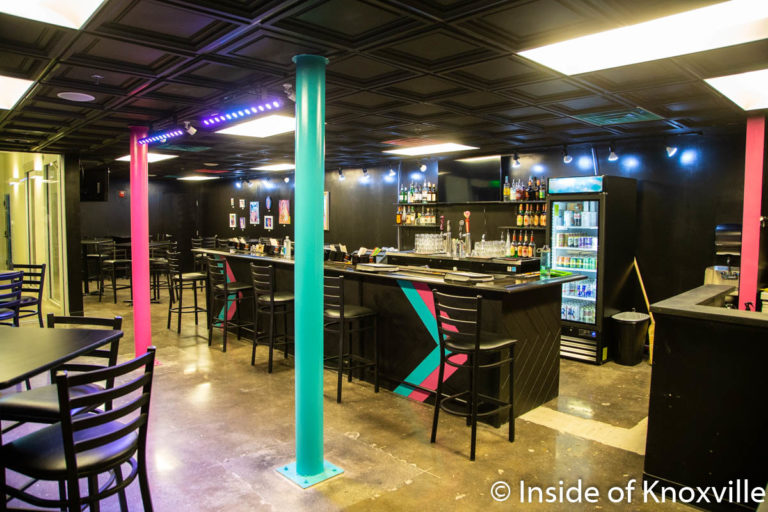 In January, when I first introduced you to Harold Goldston and his plans for a downtown karaoke bar, it seemed like an idea that would fit right into downtown’s booming nightlife. Co-owned by Harold and business partner Kevin LaRoche, it was a unique idea whose time, it seemed, had come. One small pandemic later, he’s ready to make good on that promise as he opens Knox Box Karaoke tonight at 522 South Gay Street. The entrance is right between the Kopita restaurants.

The new spot is a distillation of the world that Harold has experienced. In Japan Karaoke bars are called boxes and as he moved from east Tennessee, to London, Paris and then Brooklyn, he fell in love with the idea of karaoke done well. In some ways, you’ll find elements of his favorite karaoke spots, particularly his favorite karaoke hangout in Brooklyn, in elements throughout the new business.

The idea for the new place is to make a comfortable space where even the most timid person can have a good time. A wireless mike means you don’t even have to leave your table!

A full bar keeps the fun flowing and offers help for those of us who may need a little liquid inspiration to let our hair down and belt out a tune. They’ve even got an appropriately named shot to help you along your way: the Knox Box Liquid Courage. The bar features cocktail, a couple of wines, local drafts and canned national beers. They sold a lot of the new Mango Seltzer from Next Level Brewing last weekend, so you might want to check that out.

They also have fancy grilled cheese sandwiches with descriptive names like “The Italian One,” “The Spicy One,” “The Sweet One,” and “The Vegan One.” If that’s not your thing, you can enjoy hummusing along with the singers.

The soft opening last weekend garnered a good response and Harold feels like they are ready to go. Ready in a pandemic means some things are different. Rated for a capacity of 60, he’s only letting in around half that number. He’s also got more limited hours than he’ll have later, but he’s happy to work with current guidelines, so he’ll be closing at 11:00 each night.

Tentative hours out the gate are 6:00 pm to 11:00 pm Wednesday through Saturday. Expect special events as he moves forward and already has his first Drag Night planned for October 14. They are also available for private parties, particularly on the days they are not open.

For now, you’ll have to look for the doorway between Kopita Vegan and Kopita Meat. There will be a cool LED sign there, soon, which can display in multiple colors, so the fun starts at the door.