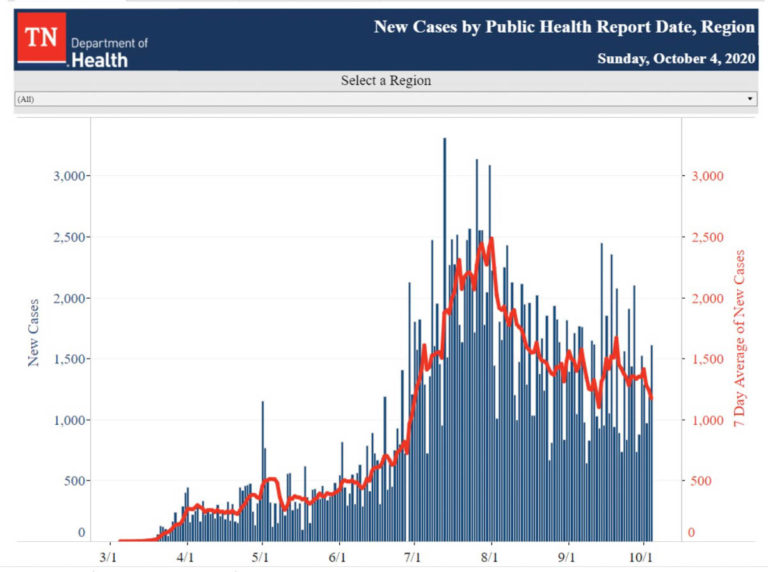 Welcome to a new week. Hang on. It seems the news cycle flips every 20 minutes or so. We’ll get to more of that under national news, but with four weeks to go to election day and tensions high at every turn, let’s remember to breathe. Despite what some are saying, we’ll get through this election. We’ll get through this pandemic. There will be another, brighter day. Do your part: Take care of yourself. Take care of others. Don’t contribute to the anger, bitterness and cynicism. I’m talking to myself as much as to anyone.

The average number of deaths is now roughly 5,000 per day, down from about 5,300 a week ago. The average has been slowly moving downward for the last two months. The four countries reporting the most deaths for the day remain the same as each of the recent weeks, though Mexico and Brazil flipped to change the order slightly: India (902), Mexico (388), Brazil (364) and the U.S. (332).

The number of countries reporting at least 1,000 cases for the day also continues to increase. On the same day the last four weeks, that number has been 28,31, and 33. Yesterday, the total was 34. Within those 34, Asia (includes middle east) has the highest representation at 12, Europe has 11 countries over 1,000 new cases for the day, while South America now has only five. It shows the dramatic shift in the numbers over recent weeks from southern hemisphere countries, to northern.

Twelve different states reported more than 1,000 new cases, yesterday, with two reporting multiple thousands: California (3,029) and Texas (2,311). The others reporting over 1,000 reflect the increasing shift in cases to the mid-west: Florida, Wisconsin, Tennessee, Illinois, Utah, New York, Indiana, Virginia, Minnesota and Missouri. Of note in the list is New York’s re-emergence. They are now averaging 1,342 new cases each day, about double their average six weeks ago.

The focus of the news in the U.S. (and likely the world) continues to be the current illness of President Trump. The weekend started with reports he had been taken to Walter Reed Hospital “out of an abundance of caution.” Later, through conflicting information delivered by his doctors, it was revealed he had had low oxygen readings and a temperature that sent him to the hospital.

As if the weekend couldn’t get any more bizarre, on Sunday afternoon, President Trump left the hospital for a ride nearby, waving to supporters. The move was criticized by medical personnel, as well as secret service agents, some of whom were required to ride in a tightly sealed car with an actively ill COVID-19 patient.

The extended storyline being followed is that of when the president became ill and who else was exposed and has tested positive. The evidence at this time points to the Rose Garden ceremony to announce the nomination of Amy Barrett to the Supreme Court. The event included 150 people (in conflict with the current mandated D.C. limit of 50). Most attendees did not wear masks. Since the event, confirmed infections of those present include, “first lady Melania Trump, former White House adviser Kellyanne Conway, former New Jersey Gov. Chris Christie (R), University of Notre Dame President John Jenkins, Sens. Mike Lee (R-Utah) and Thom Tillis (R-N.C.) and an unnamed journalist,” in addition to the President. Hope Hicks, presidential advisor, also is ill with the virus, but it is unclear if she attended the event.

Just before this article was published, it was announced that Presidential spokesperson Kayleigh McEnany has also contracted the virus. A senior advisory for the Trump campaign said there would be no change in virus protocols at Trump rallies.

Of major concern is that the September 26 event was followed with many meetings and events in which those now known to have been infected did not wear masks. As late as October 1, President Trump continued to travel and hold public events. After the Rose Garden ceremony, he attended a rally in Pennsylvania. On Sunday he held a press conference. He hosted guests and held another press conference on Monday, along with debate prep during which no one wore a mask.

On Tuesday, he traveled to Cleveland for the debate and was very likely contagious, as was Melania. According to Fox News, “Members of the Trump family and his administration did not wear masks inside the debate hall, which were required by the Cleveland Clinic, and refused to take ones offered to them by the venue. During the debate, Trump mocked Democratic nominee Joe Biden for wearing a mask constantly to help stop the spread of the virus.”

Just when you think the election could not get any crazier, the president in in the hospital, his opponent is testing daily after having potential been exposed and several Republican Senators are now ill or quarantined. The Senators’ illnesses throw into question the nomination, the announcement of which started the entire series of events. As a result of all of the above, expect the story to continue evolving while, hopefully, all concerned have a full recovery.

UPDATE: And it evolved. Vanity Fair is reporting that Don, Jr. wants the family to stage an intervention. Based on two Republican sources, “Don Jr. has said he wants to stage an intervention, but Jared and Ivanka keep telling Trump how great he’s doing,” a source said. Don Jr. is said to be reluctant to confront his father alone. “Don said, ‘I’m not going to be the only one to tell him he’s acting crazy,’” the source added.”

24 people were hospitalized yesterday, bringing the hospitalization total to 8,884 Tennesseans since the beginning of the pandemic. There are currently 815 COVID-positive Tennesseans in the hospital and 249 of these are in an ICU, with 116 on ventilators. Each of these numbers are up from what I reported a week ago (710/238/107).

Testing continues to bounce on a daily basis and, with it, the case numbers. In rough numbers, the state reported on 16,000, 18,000 and 33,000 tests each of the last three days. The state reported a 5.66% positive result rate yesterday and Johns Hopkins University has the seven-day average at 6%, which has crept up from a recent low of 5.4%.

The Knox County Health Department is reporting 85 new cases today, bringing the pandemic total to 10,254. On Saturday and Sunday, new case totals were 67 and 80. This marks seven consecutive days under 100, the first time that has happened since July. 9,623 people are considered to have inactive cases and 987 have active cases. The active case total is the highest since the most revision of calculating the number. There are a cumulative total of 441 probable cases.

One additional death was reported over the last three days, involving a Knox County resident between the ages of 65 and 74. This brings the total deaths from COVID-19 to 85 since the beginning of the pandemic. Hospitalizations are increasing, with 50 Knox County COVID-positive residents hospitalized. The number is the highest since September 6 (50) and, I believe, the two days match the highest number on any given day since the beginning of the pandemic.

The county is reporting a 6.08% average positive test result rate.

The University of Tennessee is reporting just 57 total active cases (53 students and 4 employees). 1,495 students and staff have recovered. Numbers of new cases reported over each day since Friday are 14, 1 and 2. The number in isolation or quarantine is 214, the lowest it has been since August 14. There have been no new clusters reported in recent weeks.

With the University’s numbers continuing to spiral to new lows, even during the enhanced surveillance testing is beginning (to me) to make a compelling case that 1) UT had most good procedures in place and 2) the decline in cases is not because of avoidance of testing, but rather a decline in cases. Perhaps students got the message after the first massive quarantines and high numbers of illnesses. Until some evidence is provided to change the numbers given so far, I’m hopeful for UT.

The Knox County School System is reporting 48 active cases, including 25 students and 23 staff members. The number is almost identical to the 50 active cases reported a week ago the same day. As previously noted, the pattern for school reporting appears to be lower numbers at the begging of the week, followed by increases over the following days.

326 students and staff have recovered and 1,028 remain in quarantine or isolation (906 students and 122 staff). The isolation number compares to 885 on the same day last week. This number also tends to increase during the week and remains a significant concern for the system.

The ratings on the benchmarks continue as they were on Friday. The system is looking good (green) on student attendance, bus service and cafeteria service. Concern is shown regarding teacher attendance (yellow), while custodial and substitute availability continue to be problematic (red).