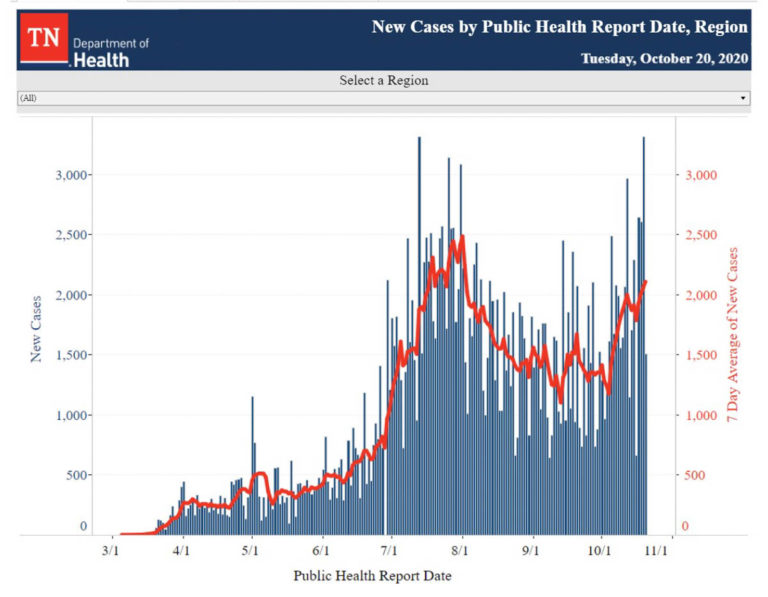 Downtown Knoxville never looked more like London than it does at this moment. That’s because, as I write, no buildings are visible, just a thick soup of fog obstructing everything. It’s kind of cozy if you don’t have to drive a car. I think I’ll just imagine that I’m writing in a posh London flat and that Big Ben is lurking just out of my sight line. It’s not quite like being there, but take what you can get, right?

The state reported an additional 30 deaths for the day, bringing the state total to 2,952 Tennesseans who have died of the illness. The seven-day average for cases is 2,105, the highest it has been since August 2. The seven-day average for deaths in the state is currently 22 deaths per day. The number of daily deaths has remained mostly in the 20s since early August.

63 additional COVID-positive Tennesseans were admitted to the hospital yesterday, bringing the pandemic total to 9,681 hospitalized at some point. Current hospitalizations dropped by 13 to 1,246, remaining near the top number reported for the last six weeks. Both ICU totals and ventilator totals dropped slightly, as well, to 366 and 164 respectively.

The number of reported tests dropped dramatically from the previous day – from 42,000 to about 13,200. The state reported an eye-popping 11.29% positive test result rate for the group, while Johns Hopkins University is reporting a seven-day test positivity average of 8.6%. The average has increased steadily for almost a month, indicating increasing community spread across the state.

Knox County is reporting 69 additional cases of COVID-19 today, bringing the case totals to 11,926 confirmed and 566 probable cases. 11,097 are considered inactive and 1,298 Knox County residents remain ill. 64 COVID-positive Knox County residents remain in the hospital, a number close to our high of 70 set on October 13, but four lower than yesterday. Since the beginning of the pandemic, 441 people have been hospitalized with the virus. Two additional deaths were reported yesterday, each over the age of 75.

Benchmarks were updated today and some shifts were reflected there. The first benchmark, for sustained reduction or stability in new cases remained red, as cases have increased in the most recent period. The benchmark for testing remained yellow and for public health response (contact tracing, etc), it remained green. For hospital capacity, it remained yellow. For sustained or decreased death rate, the indicator changed from green to yellow, as there has been a recent increase in deaths.

Positive test rates were also increased on the website. The seven day average increased from an alarming 9.76% average a week ago to a much worse current average of 12.75%. The number is about 50% higher than the state average, which is, itself, at an alarming number.

A Sweetwater nursing home has reported 11 deaths and 12 active cases among residents. The meeting with County Commissioner Biggs and Dr. Buchanan has been moved from Casen’s Steakhouse after the restaurant posted strongly worded statements criticizing the Health Department and committing to refusing to force employees and patrons to wear masks. The meeting will now be private.

The University of Tennessee is reporting 47 active cases, remaining far below previous numbers, but increasing slightly for the last three days. 1,627 students and staff have recovered. 9 new cases affiliated with the University were reported yesterday.

311 students (280) and staff (31) were reported to be in isolation or quarantine. This number has also increased each of the last three days, but remains dramatically below numbers from early last month. No additional clusters were reported and positive test results springing from the pooled testing being incorporated in student resident halls remain very small.

The Knox County School system is reporting 63 active cases, including 46 students and 17 staff members. The reported number is down by six from yesterday. 432 students and staff have recovered from the illness. 395 students and 59 staff remain in quarantine or isolation, for a total of 454. The number reflects a drop of 64 from yesterday.

The only metrics of concern are the same or improved from yesterday. Custodial availability remains yellow, while substitute availability has shifted from red to yellow for the first time this year. Fulton football activities have been cancelled for two weeks due to COVID-19 concerns. The cancellation includes the school’s next two games.