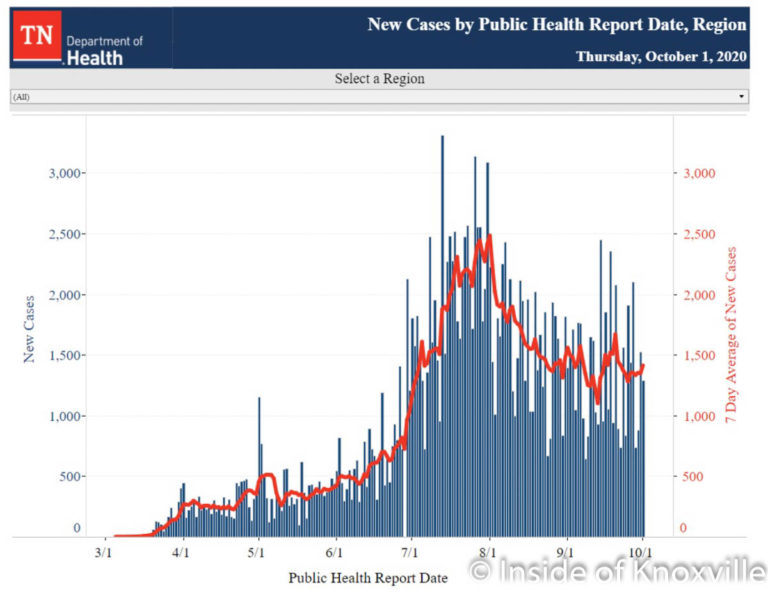 Welcome to the weekend. I hope you and yours are well and safe and actively seek some joy during your down time.

Despite the fact that I’m not reporting national news today, there is no way to write this article without acknowledging one of the biggest COVID-19 news of the pandemic: President Trump and First Lady Melania Trump have been diagnosed with COVID-19.

The fact that even the President of the United States couldn’t insulate himself from the illness, underscores the easy transmission of a virus, and the need to be as careful as we each can possibly be. As vehemently as half our country opposes him and his policies, we all join in wishing them a smooth recovery. At an instable time in our country, we need this to pass quickly and for our country to get on about the business of deciding our leadership for the next four years.

The State of Tennessee reported 1,293 new cases of COVID-19, yesterday, bringing the total to 189,575 confirmed cases and 7,835 probable cases. 180,781 people are considered to have inactive cases and 6,293 are currently ill (I mistakenly reported a higher number yesterday because I failed to take out those who had died). 47 people died yesterday, bringing the total to 2,501 Tennesseans who have died during the pandemic.

49 people were hospitalized with COVID-19 across the state, yesterday, bringing that total to 8,872 since the beginning of the pandemic. Net hospitalizations fell by 31 to 842 after several days of increase (the drop likely included the full 47 who died). That said, more people are in the hospital, other than yesterday, than have been there in a month. There are 264 COVID-positive Tennesseans currently in ICUs and 114 currently on a ventilator.

Testing continued on the lower end of the spectrum relative to recent months, with just over 18,000 tests reported. The state reported a 7.3% positive test rate for the day. Johns Hopkins University has the seven-day moving average of positive test results for the state at 5.7%.

The Knox County Health Department reported an additional 62 cases, continuing a trend of lower numbers relative to recent weeks. We marked a significant milestone as we passed our 10,000th case in the county, with that number now sitting at 10,022. Of these, 9,453 are reported to have recovered, 924 remain ill and 84 have died. There were no additional deaths reported today. There are 439 probable cases.

The measure of local positive test results has declined recently and the current seven-day average sits at 6.08%.

The University of Tennessee is reporting 90 active cases of COVID-19 on campus. The number includes 89 students and one staff member. 7 new cases were added for the day. The number continues to be dramatically lower than the previous peak, but has increased slightly through this week, moving up from 73 at the beginning of the week. 1,446 students and staff have recovered.

319 students and staff are currently isolated or quarantined, a number up from 298 on Monday, but significantly below the 2,000+ of just a few weeks ago. There continue to be no new clusters to report.

Dr. Plowman began today’s briefing by making a couple of announcements reflecting the improved situation on campus. She said the live updates will switch to once each week, on Fridays. She also said there would be a phased reopening of dining facilities. She said not only is the illness rate lower in general, but the first returns on surveillance testing indicate a lower rate than had previously been the case. Also because of this, plans are being formulated for a November in-person graduation ceremony for spring, summer and fall graduates.

Dr.Gregg said when he looks at the numbers, he is pleased to see the decreases in active cases and congratulated those who have followed recommended behaviors to bring the virus under control. He said there is and will be increases in numbers due to the new, more extensive testing, but also simply because cases are continuing to rise nationally and he expects UT to reflect that trend.

He noted the concern that increases in cases among young people is generally followed two weeks later by increased cases in older citizens as they spread the illness to them. Both Dr. Gregg and Dr. Plowman urged that inside gatherings be very limited. Of the pooled testing, with the follow up, 16 reported positive last week. Participation is still not universal, which is what they’d hoped, running around 50% in one residence hall. Dr. Plowman said being testing is not optional (yet, they aren’t all being tested?).

The emphasized the importance of everyone getting a flu vaccine. There will be shots offered in a series of events on campus. Of graduations, they noted that there will be 12 ceremonies over 4 days in order to allow for social distancing.

The remaining indicators remain steady, with a red rating for custodial staff and substitutes and two schools, Halls High School and Vine Middle School, closed to in-person learning. Halls is scheduled to re-open October 5 and Vine on October 7.