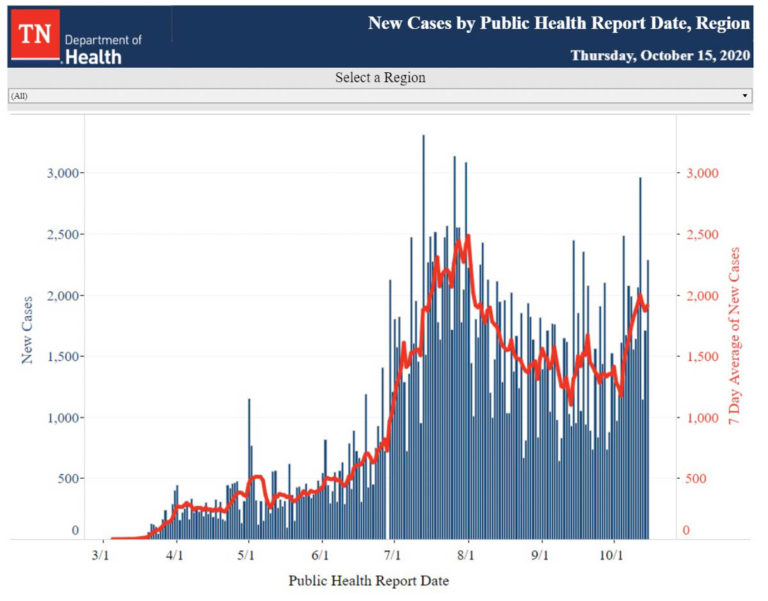 Congratulations! We made it through another another week of a pandemic/bitter election year! Early voting started and numbers appear to be high. Please vote and vote safely. We’ll do that as an extended family this weekend and for Friday Night Movie Night, we’ll have a Harry Potter kind of night in celebration of Urban Girl’s completion of her year-long quest to read the entire series. We’ve got the last two movies cued. As a life-long non-fantasy fan, I’m taking this bullet for the girl. Drinks will be involved.

The state of Tennessee reported 2,289 new cases of COVID-19 yesterday, bringing the respective totals to 212,116 confirmed cases and 10,711 probable cases. 200,164 people have recovered, while 9,088 remain ill. As yesterday’s cases surged across the U.S. to the largest total since July 31st, Tennessee ranked eighth among the states. Over the last seven days, the state has averaged 1,911 new cases each day.

36 additional deaths from the illness were reported across the state yesterday, bringing the total to 2,864 Tennesseans who have died of the illness. The state is now averaging 23 deaths each day. The 36 deaths reported yesterday was 6th highest among all states.

There were 45 Tennesseans admitted to the hospital yesterday, bringing the pandemic total to 9,416. There are 11 fewer people hospitalized today (1140) than yesterday (1151). Given that 45 were admitted and 36 died, this leaves 20 who were discharged, if the numbers reported are aligned. This leaves the total number only below yesterday for the last six weeks. There were also similarly slight day-over-day reductions in ICU (354 to 336) and ventilated (166 to 149) patients. It may  be surmised that most, if not all of these reductions were due to deaths.

Roughly 24,700 new tests were reported yesterday, an increase over each of the two previous days. The state is reporting an eye-popping 9.55% positive test result rate. It is particularly alarming, given that the number of tests for the day was solid relative to earlier levels. Johns Hopkins University’s seven-day average positive test result rate is also increasing and is now at 7.5%, after a recent low of 5.4%.

The Knox County Health Department is reporting 125 new cases of COVID-19 among county residents. This brings the pandemic totals to 11,435 confirmed cases and and 540 probable cases. 10,649 people have recovered and 1,234 remain ill. The daily total breaks a two-day run of numbers below 100 and appears to confirm my theory that Knox County numbers rise and fall, more or less in concert, with the number of tests reported by the state. When testing rises at the state level, Knox County cases rise and the same in reverse.

The University of Tennessee is reporting 49 active cases, down from 61 the previous day. This with a new on-campus systematic testing protocol in place. The rise that administrators predicted has not happened. 1,593 have recovered and 3 new cases were reported yesterday. Isolations and quarantines also dropped slightly, to 322. The majority of students now isolated are off campus (194) rather than on campus (93).

Chancellor Plowman began today’s briefing by asking everyone to get a flu shot. Dr. Gregg said there has been an increase in testing at the Student Health Center, mostly driven by the systematic testing program and referrals from that. Of these, most students are asymptomatic. Small gatherings continue to be the apparent source of most spread.

She unveiled new testing information which shows that participation in the “mandatory” testing program dropped below 50% of students. 26 positive tests have resulted. (The best rough estimate I can derive from the numbers on the site suggest around 8,950 students have been tested in this manner and 26 have ultimately tested positive, for a rate of about .3%.) They made clear that these are virtually all asymptomatic students and that 26 asymptomatic students isolated from the student body can make a big difference in spread.

Waste water testing is also underway and it is being refined. They are detecting traces of the virus, but sampling techniques are being adjusted to determine how this can be most useful. They urged students to maintain suggested behaviors and be tested before they return home for the extended winter holiday. He said this will help protect those back home. Dr. Plowman made it clear that any student wanting testing on campus can get it.

The Knox County School System is not reporting this week, due to fall break.