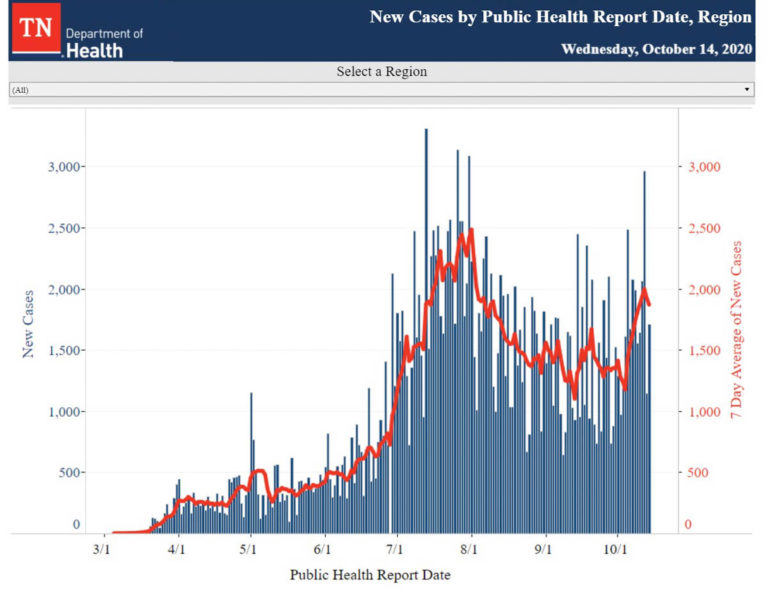 Good Thursday. It’s a beautiful day outside, like the days we dream about when the weather is bad. Soon we’ll have cold and we’ll miss these days. Get outside and enjoy the emerging beauty of the natural world. The cycles of nature continue when all else in our human world betray us. Let’s not miss the joy for the pain.

I’ve included the hospitalization chart from the state, so you can see what I’m looking at. I won’t include it every day. As I’ve mentioned before, it is a day ahead of the numbers on the front page of the state’s site, which they acknowledge there.

The good news is that it gives hospitalizations, ICU and ventilator numbers every day. The bad news is that it continually rolls off the oldest day of the six week period covered, preventing me from doing longer-term comparisons. The numbers on the left are actual patient numbers, on the right is patients per hospital reporting.

Yesterday, 62 additional people with the illness were hospitalized across the state, bringing the pandemic total to 9,371. There are currently 1,149 people hospitalized with the illness, including 354 in the ICU and 166 on ventilators. As you can see, the hospital census has gone up by over 50% since September 20. We know that during that time 610 people died, meaning, they were subtracted from those numbers, making the increase even more dramatic.

The seven day average for cases in the state is 1,869 case per day. The seven day average for deaths is 27 deaths per day. Tennessee has now surpassed New Jersey in total cases and is currently ninth among the states. The state is also 8th in per capita cases. The comparative news is slightly better in deaths, with Tennessee ranking 21st for total deaths from the virus and 27th in per capita deaths.

If there are slightly encouraging numbers today, they are in Knox County. Active cases dropped, for the first time in a week, we’ve gone two consecutive days with fewer than 100 new cases, hospitalizations dropped for the second consecutive day, and the county reported no deaths over night. The bad news for the day is in the positive test result rate which increased.

It will be interesting to see tomorrow’s numbers. If my current working theory is correct – that surges or drops in testing reported by the state are reflected by decreases or increases the following day in Knox County – we’ll be back over 100 tomorrow. I hope I’m wrong and, in any case, at least we have a better day today.

The Knox County Health Department reported 76 new cases today, bringing the pandemic totals to 11,310 confirmed cases and 531 probable cases. 10,556 people have recovered and 1,195 remain ill. Hospitalizations are now 57, which is an improvement over the last five days, but would have been a pandemic record prior to that point. The total Knox County residents who have been hospitalized with COVID-19 at some point now totals 407. The death total remains at 90.

In case you missed it in the Board of Health article prior to this report, the benchmarks were updated yesterday. Case numbers were changed from green to red, testing remained yellow, public health capacity remained green, hospitalizations remained yellow and deaths changed from yellow to green. The average positive test result percentage moved from 7.23% last week to a current seven-day average to a 9.76% positivity rate this week.

Dr. Buchanan chaired today’s meeting. She reported the above numbers and reviewed the benchmarks (noted above). Testing data has been shifted to utilize the state’s test reporting, which is where they draw their data for positive test result percentages. She implored people and businesses to cooperate with contact tracing.

She noted that hospital numbers are at their highest point since the beginning of the pandemic and expressed concern with looming flu season. She asked people to please continue the five core actions and to get a flu shot. Regarding deaths, she said it is green, but they anticipate increased deaths in coming days. She acknowledged the increased positive test rate.

Reported numbers from the University of Tennessee continue to be extremely low compared to their initial levels when school opened. The university is now reporting 61 active cases and 1,575 recoveries. The number of active cases has remained very steady and the university reported only three new cases today.

In case you missed the Board of Health article, Dr. Gregg had some interesting numbers regarding the pooled testing currently underway on campus. After low return rates on the “mandatory” testing, they reminded students that they are required to be tested and got a large follow-up group. He said 671 students were tested last week through pooled testing and 46 were referred for further testing. 11 ultimately tested positive. In make-up tests 455 students were tested and, of these, 12 were referred for follow-up testing.

If I am reading those numbers correctly, and assuming all 12 of those referred are positive, that is a positive test rate of about 2%. If that is accurate in a large pool of random testing, perhaps the low numbers on campus are truly reflective of the current disease burden. The gaping hole in testing is, however, those off campus.

The Knox County School System is not updating its site during fall break.