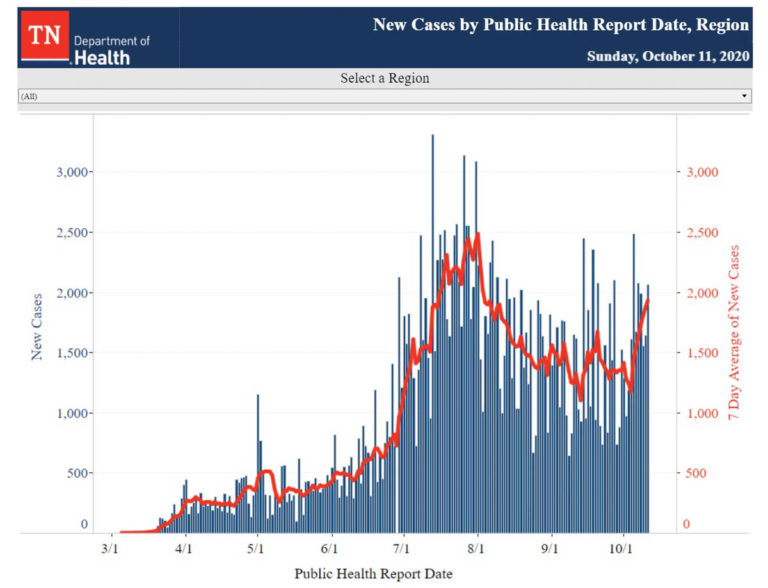 I hope you enjoyed a quiet weekend with the rain outside and football or a quiet book inside. Rainy fall weekends are among our favorites. We completed the Bill and Ted trilogy with the Urban children and I must say, “Face the Music” was most excellent. To me, it was better than the original – or maybe my expectations were lowered by “Bogus Journey,” which was so bad I grieved for the 1 1/2 hours of my life lost to the cause.

We’re using some of our time with the young ones to pursue movies they’ve missed and next up is the original King Kong. There are sneaky life lessons and lots of campy fun hidden in each one. Here’s the weekly comprehensive report. Remember, “Be excellent to each other.”

Yesterday, 277,998 new cases were reported, along with 3,874 deaths. Compared to the same day a week ago this reflects an increase of 28,000 cases, but about 100 fewer deaths for the day. The current seven-day average of new cases, 324,001, was approximately 288.3 a week ago, showing a daily increase of cases of about 37.5 thousand in just one week. As cases are rapidly tracking upward, there were four consecutive days of new records last week, culminating with a new high of 359,270 on Saturday. We are adding a new million cases every three-to-four days.

Deaths remain remarkably level in recent weeks, but may be showing signs of reversing the trend. The current average for daily deaths is 5,285, up from about 5,000 the same day last week, however down slightly from 5,300 two weeks ago. As of yesterday, three of the four countries reporting the most deaths were the same as a week earlier, with Mexico leaving the top four and being replaced by Argentina: India (813), the U.S. (325), Argentina (287) and Brazil (270). Whereas the top three countries in cases and deaths once represented over half of the totals, that is no longer the case. Nine countries reported at least 100 deaths for the day.

Nothing indicates the wider nature of the spread than the countries reporting over 1,000 cases for the day. On the same day in recent weeks, that number as been successively: 28, 31, 33, 34. Yesterday, 39 countries reported over 1,000 new cases for the day. Europe has 15 countries in the list (11 last week), Asia (which includes the middle east) has 12 (same as last week) and South America has 5 (same as last week), and Africa has four.

After discovering a dozen cases, China plans to test the entire 9.5 million residents of Quingdao in a five day period. Here’s a fresh, brief look at Sweden, the country that continues to fascinate the world for its alternative approach to the virus. With the virus erupting in Europe, once more, restrictions are being applied, but more selectively to hot spots.

Deaths are now averaging 725 per day and have continued to decline slowly, with a few surges, since early August. A month ago the average number of deaths was 760. Last week on the same day, the average was 736. States leading in deaths yesterday were Florida (90), Texas (28) and Georgia (23).

The biggest domestic news has continued to be the health of the President. President Trump has been declared to no longer be a risk for spreading the virus by the White House doctor, and held his first public event (with several hundred guests) at the White House over the weekend, saying that he is now immune and the virus “is disappearing.” New York City has instituted targeted lockdowns and began issuing fines for violations over the weekend. CNN reports that 31 states have increasing numbers of cases.

Yesterday, the state of Tennessee reported 2,068 new cases, fifth highest in the country for the day. Three of the last seven days have yielded over 2,000 cases and the four-day-average has escalated rapidly, from 1,174 on 10/4 to its current 1,930. That said, testing seems to have resumed higher levels, so that accounts for some of the increase.

The state reported 9 deaths yesterday, with a total of 62 for the three-day period since the last report. The state is currently averaging 27 deaths each day, down from 29 a week earlier. 47 Tennesseans were hospitalized with COVID-19, yesterday, bringing the pandemic total to 9,180. Of these, 846 remain hospitalized, with 245 in ICUs and 126 on ventilators. Going into the weekend, those numbers were 1,021 hospitalized, 283 in ICUs and 144 on ventilators, reflecting an improvement in all three categories.

Reported testing yesterday totaled roughly 31,000 tests with a positive result rate of 6.72%. The number of tests given in the state over the last eight days is more reflective of earlier levels, after a previous drop. Johns Hopkins University is reporting a 6.7% average positive rate for the state over the last seven days. While still slightly higher than preferred, the positive test rate has remained steady and well below previous levels.

The pandemic total is now 11,024 confirmed cases, with 501 probable cases. 10,308 are considered recovered and 1,131 are currently ill with the virus. There were 957 at my last report on Friday. Of most pressing concern, is that hospitalizations continue to establish new records. We tied a record on 10/5 with 50 hospitalizations of COVID-positive Knox County residents at one time. That number has steadily climbed since and is now at 66. There were no deaths reported in the last three days, leaving that total at 86 for the county.

The University of Tennessee is reporting 59 active cases, almost identical to the number reported for the last week. 1,553 students and staff have recovered. New cases reported each of the last three days were 11, 4, and 1. 293 are in quarantine or isolation, 25 more than I reported on Friday. No clusters were identified.

For now, I will continue to report UT statistics, but I’m not sure how much longer that will continue to be the case. One of two things is true: It is possible the of cases are so low at the University of Tennessee and, since they are included in Knox County numbers as appropriate, there is no reason to report them separately. Alternately, the data coming out of the University of Tennessee is vastly under reporting the true level of illness. In that case, there is no need to continue reporting misleading numbers.

I’d be interested in your take on whether to continue.

The Knox County School System is on fall break and is not updating their numbers until they return to school next week.