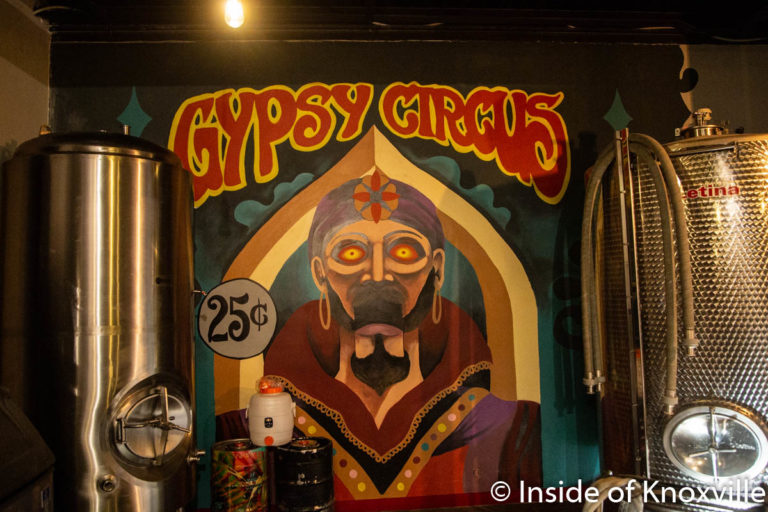 Stephanie and Aaron Carson are set to open Barrelhouse by Gypsy Circus within the next few days. The beautiful space will be Knoxville’s first taproom focusing on cider and, in this case, on ciders made from wild yeast. The couple opened Gypsy Circus Cider Company, Tennessee’s first craft cidery in Kingsport. I visited the new restaurant and spoke with Stephanie about the history of the company and the plans for the new venue.

Aaron grew up in apple country, in northeast Tennessee outside of Erwin. He spent his youth going to the apple festivals, and about ten years ago we got involved in the craft beverage industry as festival organizers. In Knoxville we did Brewhibition and the Brewer Summit here in Knoxville. He wrote a book, East Tennessee Beer: A Fermented History.

He has a business background and I have a media background and we realized that there was a gap in Tennessee, because there wasn’t a cidery in the state. We began construction in 2015 on a cidery in Kingsport, planning to open a small 40 barrel operation. We have now quadrupled that capacity in five years.

About 15 months ago, a Knoxville location became an idea. I grew up in Maryville and we come back a lot. We felt that Knoxville could support something like this. We’ve been watching the craft beverage industry grow in Knoxville and we knew from our own market research that 25% of our crowd on a weekend in Kingsport has driven up from Knoxville.

Knoxville is sort of our second hometown and we felt like it made sense. We never dreamed it would take fifteen months to open. I’ve joked with people that I’ve made humans faster than that! But things happen the way they are supposed to happen and now we have this large space and we’re looking forward to focusing on the “wild side.” You can’t work with wild yeast in a facility that uses regular yeast because they will cross contaminate almost immediately. We’ve been wanting a place to play with wild yeast and that’s what this will be, also.

It’s a taproom and a restaurant and an event facility, but it is also a manufacturing facility. We’ll be aging ciders and making ciders with wild yeast to sell in the taproom. We’ll be selling our traditional ciders, as well, like Raindancer, Queen of Swords, the Elixir series, but we cannot make the regular cider here. Wild yeast is kind of new to the cider world and we believe we’ll be the fourth facility on the east coast manufacturing it.

Matthew Lillie is the barrel-master for the new project. Bently at Xül Brewing is a friend of the couple and he mentioned the building to them. Originally intending to open a tap room and restaurant, the adjacent space seemed perfect for events and Stephanie has a background in events, so they opted to expand their plans in the 7,000 square foot facility. She said she thinks there is a need for event space that “pays homage to the craft industry.”

We’ve intentionally designed it to be blank canvas. It’s very color neutral, but we have a lighting package that will allow us to customize the look. The restaurant is called the Bohemian. There is one in Kingsport and now one here. It uses cider as much as possible in the menu. We make a Thai peanut sauce that’s made with cider for Thai tacos. We use our Queen of Swords cider for the cheese dip. We bring as much cross-pollination between the two as possible.

We love international flavor, so food is another iteration of that. We’d hosted food trucks and its hard to build consistency as they aren’t always available. We do tacos, nachos, quesadillas. This is not a Mexican restaurant, you’ll find Thai chicken and Thai shrimp. We’re lucky here to have two people come on board who have a pastry background. We’ll be doing macrons made with Gypsy Cider. Another person developed a gluten-free vegan cider bread which we’ll be serving here.

We’re literally mom and pop. We don’t have a board or investors to answer to and we’re able to do things ethically. That’s a hard line we’ve drawn as a brand: We only use fresh-pressed juice. We don’t use concentrate and feel its an important distinction. Some of the mass-produced, lower priced ciders may choose to use that. We don’t use extracts or cancer-causing chemicals.

She says they will be open very soon, but they want to make sure everything is ready, particularly safety protocols.

We’re opening in a pandemic. Our staff will be masked, regardless of whether it is mandated, tables are spaced at a greater distance and we’ll use the outdoor space and event space as spillover. We have a large game library and that will be growing. We are board game nerds in our house, but that is a hard thing to do during a pandemic.

People can look for more events here as we can have them. We have a drag show brunch scheduled for November 1. We have some drag queens that we work with in Kingsport that we just love and they’ve become family and are super talented and entertaining. They just finished a show in Kingsport and were able to maintain really good precautions.

We’ll do things like fire shows outside. We’ll do something called a “sidra” pouring with Spanish Cider. We always have yoga. We often do belly dancing. We try to support local music as much as possible. If there is an envelope to be pushed, we’ll go for it. Last Saturday we had a magician in Kingsport. We constantly look for things people haven’t seen before. We’ve got a state-of-the-art sound system and a mobile stage. Right now as we open we’ll focus on staying safe.

She said they make their wines from muscadine and concord grapes and they make mead, which is covered by the same licensing. There are a lot of similarities in process. Their daughter named the line of wines “Unicorn Tears.”

The new location will be open Monday through Friday, 4:00 pm to 10:00 pm, Saturday 11:30 am to 11:00 pm and Sunday 11:00 am to 7:00 pm. The hours will likely change, she says, as she gets to know the market. She said events are already scheduled. The are in process of joining KABA. She said the neighborhood is exciting for its density of breweries.

You’ll also be able to buy cans and kegs for take out.