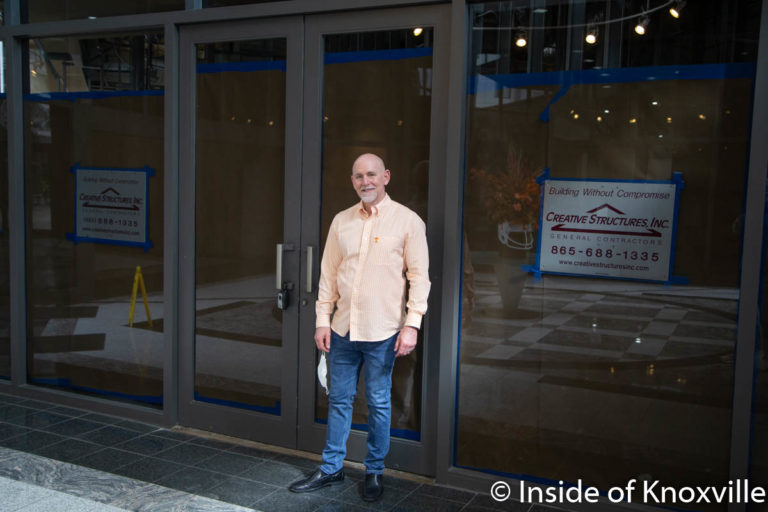 Downtown has seen explosive growth in the last decade. More people are continually moving to the center of the city and, increasingly, we’re attracting visitors to our beautiful spot. With that has come a similar increase in businesses, mostly restaurants and bars, with a mix of retail.

Essential services, however, continue to be a need. In the medical arena, we’ve made some strides, but there’s room for more. I’m very appreciative of the Covenant Convenient Care Walk-in Clinic and Phoenix Pharmacy. We’ve had a dentist downtown, for several years, but I understand the building housing the practice at 304 South Gay has recently been sold and I there will no longer be a dentist office located there.

The good news, is that downtown will have a new dentist starting in January, when Bill Pippin will open a dental office and medspa in the First Horizon Plaza on the 800 block of Gay Street. He owns a dental practice in Sevierville, Pippin Dental Care, which he’ll continue to operate. The dental and medspa office is now under construction.

Bill is from Bristol, Tennessee, where he graduated high school before attending UTK for his undergraduate degree and UT Memphis for his DDS. Determined to return to Knoxville, he worked as an associate in a practice here for two years, while looking for an opportunity to establish his own practice. He opened a practice in Pigeon Forge in 1984 and moved it to Sevierville in 1998.

But he wasn’t finished with Knoxville. Seven years ago he purchased a downtown condo to enjoy on weekends. He and his wife, Laura, enjoyed weekends in the city and, increasingly began to consider making the move permanent. Two years ago, they made the move official, sold their 6,000 square foot home and moved into their 1,700 foot condo. He said they’ve never looked back.

Not long after they moved, Laura suggested opening a practice in the downtown area, noting the fact that it has been underserved by the medical professions. In February of this year he began looking for a suitable spot. When the pandemic hit, he said it didn’t influence his decision. “We knew this wouldn’t last forever. It seemed like a good time.”

He said when the pandemic hit, he closed the Sevierville office on March 17 and remained closed for seven weeks. Once he reopened, he said there was a large pent-up demand and he’s been very busy since. He said the business flow is now about normal and pointed out there have been no documented transmissions in dental offices with the strict protocols now in place.

Creative Structures is doing the construction, and the build-out is progressing rapidly. He noted that they’ve built other dental offices, and that really matters because there are specific needs in dental construction relating to the power and water needed to do the procedures. They started work about a month ago.

Initially, he’ll be the only practitioner and he plans to be open two days a week. He’ll increase staffing and hours as demand warrants a change. He sees it as an “opportunity to take my esthetic practice to a new level.” He offers IV sedation for patients who want it. He’ll have a Cerec Cad Cam System and can make permanent crowns in an hour-and-a-half, eliminating the need for temporary crowns. The office will be full service, offering dental implants, sedation dentistry, cosmetic dentistry, restorative dentistry, orthodontics, periodontics, pediatrics, extraction and surgery

“People avoid dentistry, but if you listen and reassure them, you can make them comfortable to move forward for their health and esthetic needs.”