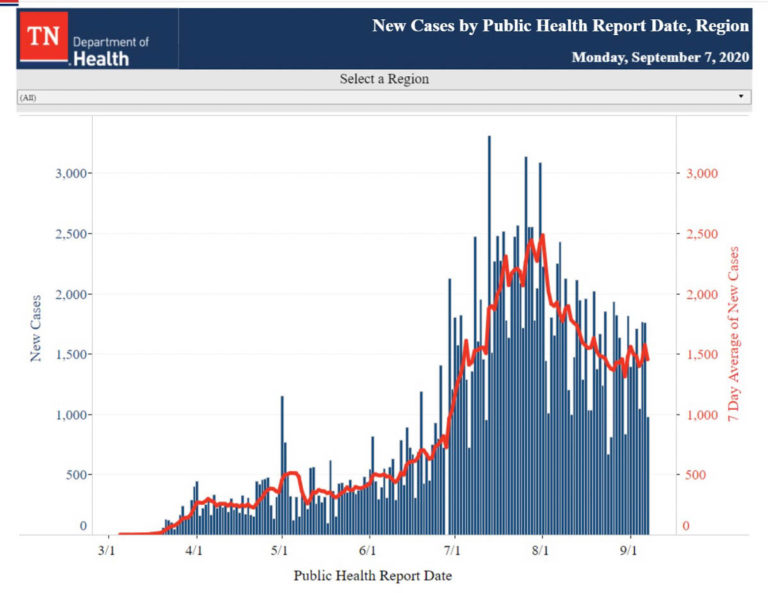 I’m so grateful to have such a beautiful spot on earth to spend these months as we work through the pandemic.  I love walking the city streets and I love being able to quickly be walking beside a river or hiking through the Urban Wilderness or even the Smoky Mountains. I hope you’ll all take a chance to get outside as summer turns to fall. It promises  to be beautiful. If you didn’t read this morning’s article, check it out and visit one of our great local natural areas.

Yesterday, the state of Tennessee reported 983 new cases of COVID-19 and 4 deaths due to the illness. The pandemic total for cases in the state is now 165,109 and deaths total 1,869. The state reported a net drop of 18 in hospitalizations to 826. About 13.6 thousand tests were reported yesterday, one of the lowest recent totals. The state reported a 7.72% positive test result rate, while the seven-day average via Johns Hopkins is slightly lower at 7.1%.

Hospitalization numbers continue to be altered after they are first reported. A week ago today I reported 903 in the hospital and now that day is listed as 911. I assume information regarding state assignments must have shifted and the older numbers were corrected. Additionally, the information for hospitalizations on the front page of the state website is a day behind the graph buried further down. It shows that the most recent data includes an increase of 18 to 844 hospitalized with the illness. All that to say the numbers may vary and bigger trends or longer views are preferable.

According to the graph, 844 are hospitalized, with 276 in ICU and 128 on ventilators. The big picture is that these numbers have pretty steadily dropped over the last month. On the same day last month, there were 1,095 COVID-positive hospitalized Tennesseans, 417 in ICU and 200 on ventilators. In  terms of very ill patients, the state is much better off today than it was a month ago.

I was able to find the numbers (also oddly buried) for inactive cases (the newly renamed recovered cases). The state is reporting 12,677 active cases. This compares to 36,315 a week ago. We have not improved that much in a week, rather the state has shifted the definition of a large group of cases previously, but no longer, considered active. There are 4,401 probable cases in the state.

The Knox County Health Department reported 81 new cases today, the first time the number has been below 100 in a week. This brings the total since the beginning of the pandemic to 7,656. An additional death was reported, bringing that number to 64. There are 1,852 active cases and 42 COVID-positive Knox County residents are currently hospitalized. There are 274 probable cases.

Dr. Buchanan chaired today’s press conference and began by thanking those who are working to contain the spread of COVID-19 at the University of Tennessee. She discussed how to safely go to a doctor’s appointment. She said check their procedures before the visit. If you are exhibiting symptoms of COVID-19, do not go for an appointment. See if there are tele-medicine options. Practice the five core actions.

Testing is underway today through Friday at the Jacobs Building. She provided an update regarding data, saying the active case counts have been changed to be in line with the state reporting. A twenty-one day period was put in place early in the pandemic and now we know that usually people are not spreading the illness after ten days. The new fourteen-day cutoff had the impact of dropping the numbers of active cases when the change was made over the weekend. She said changes such as this are to be expected in a novel situation.

Over the weekend, she noted, we saw our highest level of increases and the surge resulted from the 10 – 44 year age group and pleaded with these residents to follow guidance.

The University of Tennessee is reporting 600 active cases, including 592 students and 8 employees. 2,012 students and staff are in isolation or quarantine. The total includes 984 non-residential students and 955 students on campus, as well as 73 staff members. 21.5% of these have a confirmed positive test. No additional clusters have been identified.

Dr. Plowman started by saying cases are going up much too fast and more drastic measures will be required to control the spread. She noted they have added hotel space and it will not be enough. She said there will be announcements in upcoming days about what measures they may take, pointing out some schools have instituted curfews and other measures.

She said the vast majority of the student body and staff is working hard. She said she does not want to pick on certain groups, but she’s hearing disturbing stories. She said they’ve heard numerous reports of off-campus fraternity parties to avoid restrictions, fraternities encouraging members not to get tested and more. She pointed out that the spread will be worse and school can’t be maintained if it continues at the current rates.

She said they have added contact tracers. She said contact tracers are reporting that most people are cooperating with contact tracers. Most students readily know where they’ve gotten it and very few have no idea. She urged any with symptoms to not discount it as allergies or a cold, but to get tested.

She ended by saying there will be further information in the short term.

The Knox County Schools, presumably due to the holiday, have not updated their COVID-19 numbers. I suspect they will do so later this afternoon. An additional resource for those interested in schools is supposed to be unveiled today at the state education website. It promises to give individual school date for the illness regarding both teachers and students.