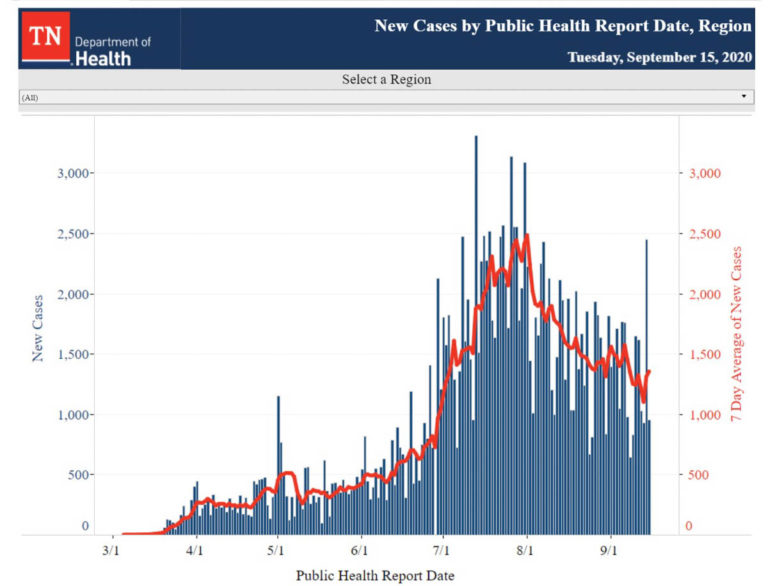 Welcome to mid-week and to the second half of September. If you feel a little discouraged with our current malaise, consider that we got a few days of tiger fun while the west coast burned. While our air was turning crisp with promise of a beautiful explosion of color to come soon, the gulf coast was assaulted by back-to-back hurricanes, with more possibly on the way. Despite the hardship, we are fortunate. Keep the flame of hope alive and burn a candle for those who are facing struggles from which we’ve been mercifully exempted.

The state of Tennessee reported 957 additional cases of COVID-19 yesterday, bringing the total number since the beginning of the pandemic to 169,893. An additional 30 deaths were reported yesterday, bringing that total to 2,127. Of those diagnosed since the beginning of the pandemic, 158,660 are considered inactive, leaving 9,106 Tennesseans who remain ill. There are 5,338 probable cases.

82 Tennesseans were hospitalized yesterday, though the net number of hospitalized, COVID-positive cases dropped to 791. The trend toward fewer hospitalizations continues, dropping by almost 200 from the same date the previous month. ICU patients now number 257, with 119 on ventilators. It continues an odd disconnect: Fewer Tennesseans are being hospitalized, while more are dying.

The number of tests reported yesterday, 22,384, reflects a 39% drop from yesterday and partially explains the drop in cases reported. It does not, however, explain the drop in positive test percentage from 7.15% to 4.69%. Mathematically, the number of positive tests should rise with a reduction in testing. Johns Hopkins, meanwhile, is reporting an improving positive test result rate, with the seven-day average currently reporting at 5.8%.

The Knox County Health Department reported 66 additional cases today, bringing the pandemic total to 8,656. No additional deaths were reported, leaving that total at 67. Of the 8,656, 6,892 are considered inactive, while 2,024 remain ill. There are currently 29 COVID-positive Knox County residents hospitalized, the lowest number reported since early August. There are 327 probable cases, as that number has increased every day this month.

The Knox County Board of Health meets tonight amid increasing pressure to deliver new strategies in the fight against the illness. The Knoxville News Sentinel editorial deemed them “ineffectual,” Dr. Birx visited this week and said more should be done, and Dr. Plowman has pleaded for help at U.T. A vocal segment of the community is opposed to any additional measures and wants to remove those in place, including the mask mandate. The current mandate for bars to close at 11:00 pm, ends tonight in the absence of action on the part of the Board of Health.

Benchmarks were updated today and remain unchanged: Red for case increases, green for public health capacity and yellow for all others.

The meeting will begin at 5:00 pm today and may be viewed on the local Community Television station, on their website or on the Knox County Government Youtube channel.

Numbers are improving at the University of Tennessee. While the beginning of classes – and more importantly, communal living – was messy, with worse numbers than expected, the last several days offered some hope. There are currently 499 active cases in the UT community, including 486 students and 13 staff members.  The number dropped by 146 since yesterday and 163 since the same day last week.

It might appear that students now understand the stakes of their behavior and are responding accordingly, though it is early in the academic year and we have yet to see if there will be a Labor Day bounce in numbers. Still, it’s encouraging to see that hook in the graph.

Knox County School numbers also include reason for encouragement. The number of active cases connected with the Knox County Schools is now reported as 42, including 33 students and 9 staff members. The number is down from 50 yesterday and from 45 a week ago on the same day.

176 students and staff are reported to have recovered. 908 remain in quarantine or isolation, including 843 students and 65 staff. The number dropped over 100 since yesterday, though it has increased about 90 from a week ago on the same day. Benchmarks remain the same, with green for most, with the exception of cafeteria staff (yellow) and substitutes (red).