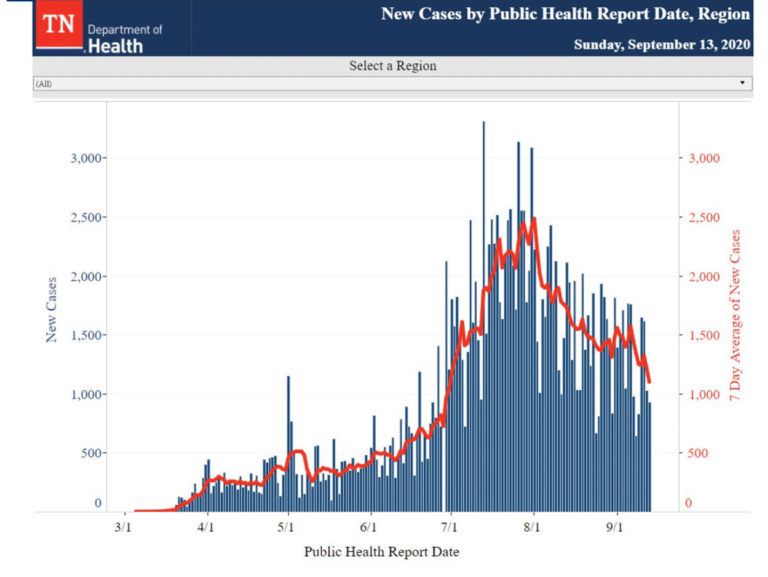 It’s Monday and, incredibly, it is mid-September and we are six months into dealing with a pandemic and a range of situations that would have been hard to imagine in early March. I hope you are taking care of yourself and others. That’s the thing we can do that does remain in our control. Find joy and share it. We may not be chasing tigers this week, but there’s something to bring a smile.

Just over 29.2 million people have been diagnosed and reported to have COVID-19 around the world and just over 929,000 have died of the illness. Just over 21 million have recovered and over 7.2 million remain ill. In the week since the last report, roughly 1.9 million additional people have become ill and roughly 35,000 have died.

The number of new cases yesterday was roughly 244,000, more than 12,000 higher than the same day the previous week. About 3,900 people died yesterday, compared to 4,200 the same day a week earlier. New daily cases remain near their peak at about 265,000 per day (seven-day average), but are about 6,400 below the same day last week (which was the all-time peak). Roughly 311,000 cases were reported by the end of the day on Friday, a new world-wide daily record.

Deaths continue to track slowly downward, suggesting perhaps, that we are better at protecting the most vulnerable, better at treatment, and that perhaps less vulnerable populations (young people) are now the largest group of new patients. The seven-day average of global deaths attributed to the illness is about 5,100 deaths per day, which compares to over 5,300 a week earlier. The countries reporting the most deaths remains the same as last week and India far out-paces the other four. India has also seen a week-over-week increase in deaths, while the other three have seen a drop. The countries at the top for yesterday are India (1,140), Mexico (421), the U.S. (392) and Brazil (389).

The countries at the top for most new cases has shifted a bit from a week ago. First, 28 countries reported over 1,000 new cases yesterday, compared to 25 a week ago. The top three countries remain the same the first two showed increases from the same day last week: India (93,215), the U.S. (31,857) and Brazil (14,597). India reported the highest single-day pandemic total for any country on Friday with 97,654 new cases. Indonesia is a country of note near the top. With a population of nearly 270 million, they have a rapidly escalating case and death rate.

Eight of the 28 countries are in South and Central America, but European countries have surged. France and the UK were in yesterday’s top 13, Italy, Romania, the Netherlands and Ukraine had over 1,000 and Belgium had just under that group. Spain is also being hit hard, but did not report yesterday. France has a rate of new cases much higher than its first wave, setting a single-day record on Saturday with 10,561 new cases. While deaths in the country, like many other countries are not commensurately high now, compared to the first wave of the illness, they have steadily increased from high single-digits daily to 30+ daily deaths.

Israel has entered a second lockdown, this one planned for three weeks. The Pfizer CEO says they will know the efficacy of their vaccine by the end of October. The pandemic’s damage to the world’s major economies is estimated to be roughly six times that of the financial crisis. One of the most encouraging international reports comes out of Australia, where they are concluding flu season with very low case numbers. The good news is largely attributed to mask wearing and other interventions designed to reduce spread of COVID-19. It may mean that the feared surge in flu cases intertwined with COVID-19 in the more populous northern hemisphere countries does not materialize this coming winter.

Just over 6.7 million Americans have been diagnosed with COVID-19 and about 199,000 have died of the illness. The U.S. leads the world in both categories. Close to 4,000,000 people have recovered and about 2.5 million remain ill. Over the last week about 200,000 new cases have been identified and about 6,000 additional deaths have been reported.

The 31,857 new cases reported yesterday compares to 31,110 a week ago. Reported deaths, yesterday, totaled 392, a drop from 433 the same day a week earlier. Trends for new cases continue to decline, with the current seven-day average at 35,163 new cases each day, compared with 42,053 a week earlier. The number remains higher than the peak in April which led to widespread lockdowns. Deaths are averaging 753 per day compared to a 864 per day average a week ago.

The biggest related political story of the last week involves recordings in which President Trump told Bob Woodward that he knew the virus was an extreme threat, but told the American people otherwise for weeks. The president told Mr. Woodward that he knew in early February that “It’s also more deadly than even your strenuous flus,” even though days later he said publicly, “within a couple days is going to be down close to zero.”

Some have been outraged at the statements, which according to him, he knew to be false at the time, while he and others insist it was done to avoid panicking the American public. Up to this point it was unclear if he didn’t understand or didn’t believe the threat in those early weeks, but the recordings make it clear he understood and seemed to believe it, but chose to say otherwise. The president, meanwhile, has resumed large in-door rallies in violation of state limits on gathering sizes.

The state of Tennessee continues to report decline case numbers as the state reported 1,622, 1,032 and 933 cases for each of the three days since Friday’s report. The seven-day average for daily cases is 1,100, which compares to 1,573 the same day the previous week. Over the same three days, deaths were reported as 37, 39 and 14 in the state. The seven-day average for deaths is now 31, second only to the 32 reported on August 22.

Pandemic totals for cases and deaths have now reached about 172,000 cases and 2,078 deaths. Hospitalizations of COVID-positive patients continue to decline and are currently at 703 total. ICU usage and ventilator usage have also declined. Only 31 Covid-positive people were hospitalized yesterday.  Also declining are active cases, with 8,856 currently reported compared to over 10,300 on Friday.

As a whole, the picture for the state is encouraging. Then there is Knox County . . .

For Saturday, Sunday and today, the Knox County Health Department has reported 189, 121 and 63 new cases. The 189 reported on Saturday is the second highest daily number reported since the beginning of the pandemic – second only to the 222 reported six days earlier. The total for today breaks a pattern of five consecutive days of more than 100 new cases.

Driven by infections in younger people, Knox County is facing a second peak in cases. 23% of all cases in the county have been among 11 – 20-year-olds and 24.72% have been among those between 21 and 30. Oddly, in a three-day period which included 373 new cases, active cases dropped to 1863 after the surge, roughly to the same level as report last Thursday. For the pandemic there have now been 8,371 confirmed cases in the county, of which 6,632 are considered inactive.

Hospitalizations have declined to 34 currently hospitalized COVID-positive Knox residents. Probable cases have trended steadily upward, increasing each day of the month of September to the current number of 318. Deaths have continued to steadily increase, with three additional deaths reported over the weekend, bringing the total to 67.

The rising case numbers and the inability for our leaders to mount a united front to combat the illness has led to frustration expressed in a very direct editorial in the Knoxville News Sentinel today. The editorial was summed up in its caption: We need Knox County leaders to come together now to avert a COVID-19 catstrophe. Noting that Knox County now leads the other urban counties in the state in case growth, it called the Board of Health ineffectual and stated a dire warning,

Our board of health has proven unable to muster the will to prevent an impending cavalcade of devastating events: the closures of Knox County Schools and the University of Tennessee at Knoxville; a resultant cascade of business failures as spending is choked off for months or more, instead of the weeks it would take to slow the pandemic’s advance; a rising toll of our family members damaged or dead from the virus.

It suggested a coalition of city, county, educational and other leaders (specifically naming them) to convene immediately to make recommendations to the board before Wednesday.

The number of students and staff in quarantine or isolation continues to increase, though slowly. 2,175 (88 employees, 1,073 on-campus students and 1,014 off-campus students) total are now isolated, compared to 2,079 reported on Friday. No additional clusters have been identified.

The Knox County Schools last updated their numbers late Friday afternoon, reporting 55 total active cases (40 students and 15 staff). This is slightly lower than the number reported the day before (58). Cedar Bluff Middle remains the only school closed and it is scheduled to re-open tomorrow.

142 students and staff have recovered.

There are 863 students and staff in isolation or quarantine. This reflects a slight drop from the 871 reported the day before. Of these, 787 are students and 76 are staff. A week earlier the number was 662. All benchmarks remain unchanged from last week, with the primary concern being substitute teachers.