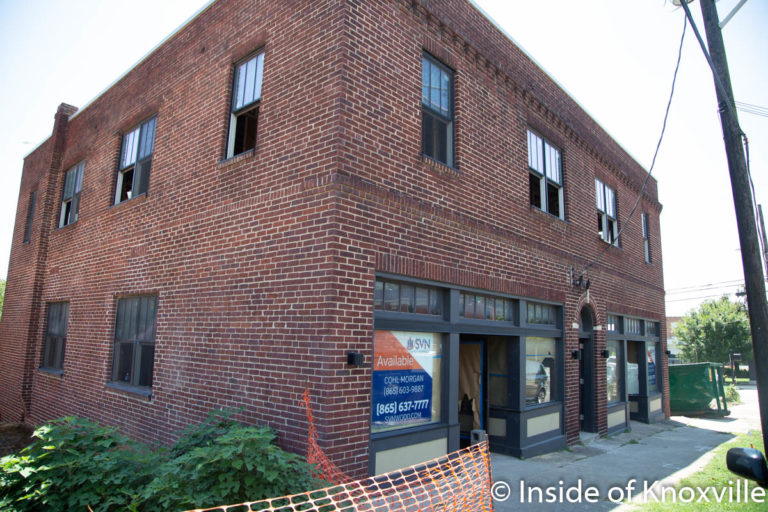 The building at the corner of Fifth Avenue and Central Street sat vacant for years. Built over 100 years ago, it had seen better days and stood by itself across from the opulent and refurbished Knoxville High School built in about the same era. Originally constructed as commercial space on the main floor and residential on the second, it had long since lost its purpose.

Jeffrey Nash purchased the building and developed a plan for the site that includes not only the current building, but an additional building and a site plan. The entire plan would place three-to-four businesses on the site, as well as 24 new apartments. Exterior spaces will be developed, giving the south side of Fifth a finished look its not seen at that spot since the Interstate was built.

Plans for the existing building include two commercial spaces on the front of the building and four small apartments above. The choice was made to divide the top into four homes in order to keep rents low and provide more affordable homes near downtown. The building is a three block walk to the Old City and within three blocks of breweries and restaurants on and near Broadway.

The second and third floors, as seen from Fifth Avenue will each have eight apartments. The rear of the building will be four stories, with the additional floor due to the downward slope of the site from front to rear. Four town homes will be built across the back, each two stories tall, bringing the total homes in the new building.

The three-to-four businesses and twenty-four new residential units will also have access to about thirty additional parking spaces to be built on the extreme eastern end of the property and behind the existing building. Parking spaces also line the street in front of the current building and the site for the second.

Additionally, plans are in place for an outdoor living space on the corner of the two streets. Mr. Nash said he wanted the corner to be appealing and to add, rather than detract from the appearance of the property.

Construction is well underway on the existing building which had to have extensive work in order to “help it stand for another hundred years.” The timeline for that portion of the project calls for it to be completed and occupied by January. One of the two commercial spaces is already spoken for and multiple potential occupants have expressed interest in the second commercial space.

The planned building is also under construction. Footers and foundation work are being completed and ground up construction will start soon. Nash said that “masons begin work next month,” and from that point the work should take about ten months to completion. He hopes to have it ready for occupancy around July 2021.

For information about leasing, contact Cohl Morgan of SVN Wood Properties at 865-637-7777.