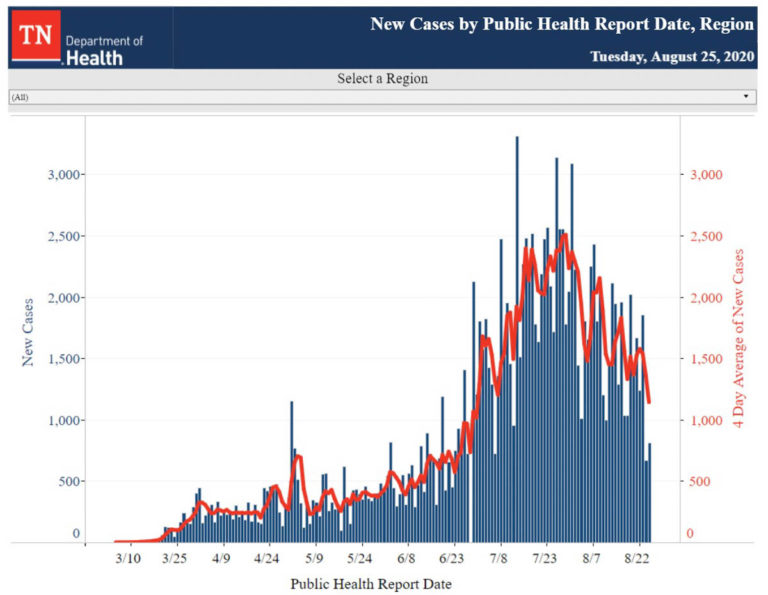 It’s Wednesday, or “Miércoles,” as we’ve recently learned in our home. Both kids are immersed in Spanish lessons on top of their virtual school activities. I’m pretty sure I’ve gotten my English letter sounds down, as well, (thanks “Leap Frog!”) and we’ve counted to 100 about 1,000 times. Throw in games of Monopoly (“count the money, yourself!”) and games of “I Spy . . .” and its a pretty busy day. And a happy one. I hope yours are as filled with richness.

There continues to be good news internationally, as new daily cases continue to drop. The number of new cases yesterday is about 3,700 fewer than the same day a week ago and the seven-day average has now dropped to 248,573. That said, it’s important to keep perspective in mind: We shut down much of the world when cases were about 20% of that level.

Moderna is reporting encouraging results from their vaccine trials with older adults.

Cases seem to be inching down after precipitous drops over recent weeks. Today’s 40,098 cases compares to 43,999 the same day a week earlier. The average number of new daily cases is now 42,705, down from 49,284 a week ago. The current number is about 40% lower than the peak five weeks ago, but about 35% higher than the first peak, earlier in the spring.

Deaths also continue to very slowly drop. Today’s 1,291 deaths compares to 1,358 the same day a week earlier. The seven-day average is now 965, down from a recent peak of 1,177. Several variables are credited with reducing the number of deaths relative to cases now as compared to April. Remdesivir, steroids, better protection for the most vulnerable, better understanding of when hospitalization and ventilation should happen all seem to be contributing.

The University of Alabama has reported more than 500 cases of COVID-19 in its first week of classes, while Ohio State has suspended 228 students for violation of pandemic guidelines before classes even start. A college suspension generally means a delayed graduation.

The CDC now says that people who do not have symptoms, but have had exposure, do not necessarily need to be tested. The reversal in guidance is alarming many medical professionals concerned that it is simply a way to reduce testing numbers, while allowing people who are asymptomatic to spread the illness. The new rule is allegedly coming as a result of pressure from the Trump administration. Testing has, in fact, dropped by about 25% in the U.S. over the last month, even as cases have dropped by about 40%.

The significantly lower number of reported cases continues in Tennessee as 813 new cases were reported yesterday, bringing the four-day average down to 1,143, the lowest it has been since June 30. The new total cases since the beginning of the pandemic is now 145,417. Just over 15,000 tests were reported yesterday, well under half the testing done two days earlier, resulting in the lower number. The state reports a 6.3% positivity rate for the day, which is a full percentage over the day before.

1,994 people were moved into the recovered category, yesterday, taking that total to over 108,000. An additional 40 deaths were reported, bringing that number to 1,628. The net result is that there are now 35,754 Tennesseans whose illness remains active. This is a drop of about 1,300 since last week. The 40 deaths is the third highest daily total since the beginning of the pandemic and leaves our seven-day moving average for deaths at 29.

94 additional people were hospitalized across the state yesterday, bringing that total to 6,515 since the beginning of the pandemic. The number of currently hospitalized COVID-19 positive patients, currently at 895, continues to trend downward. It sat at 1,050 a month earlier, while 410 were reported to be in the ICU and 193 were on ventilators. Those numbers have also fallen, to 314 in the ICU and 164 on ventilators.

Locally, the Knox County Health Department is reporting a second consecutive day of lower new-case numbers, with 34 new cases, the lowest number reported since June 12. This brings the pandemic total to 6,063. Of those, 4,116 have recovered and 55 have died. There were no additional deaths reported over night and active cases now total 2,115. While the number of active cases isn’t significantly smaller than other days reported this month, it is numerically the smallest number since the beginning of the month.

The University of Tennessee is reporting 131 active cases, up from 126 yesterday. 7 are employees and 124 are students. The university is also reporting 543 students and staff are in quarantine or isolation as a result of active cases or exposure. This increased from 489 the day before.