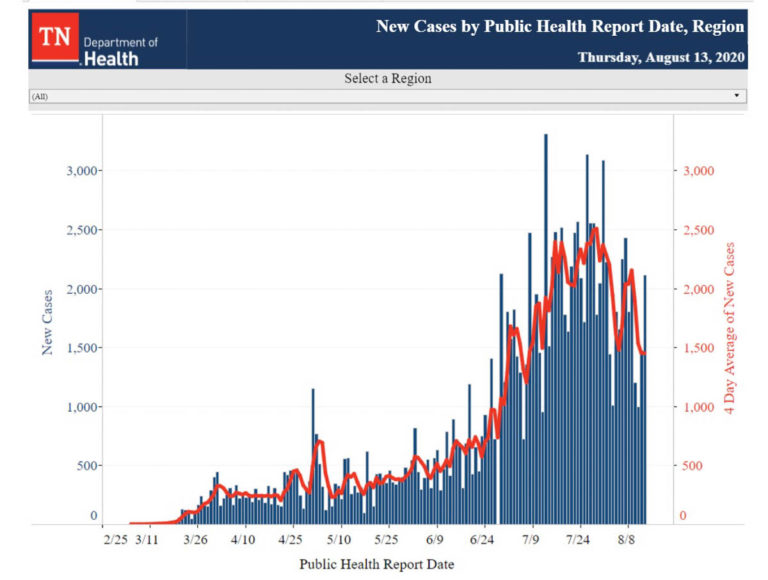 Happy Friday. I hope your weekend is a good one. Our family picks up a chrome book and “manipulatives” for a kindergarten student today as we continue to ramp up for virtual education. Accomplishments this week: Pronouncing “girl” and “world” with proper “r” sounds and counting, more or less, to 100. We also passed the mid-point of “Juneau the Sleigh Dog,” which we are reading nightly. This weekend may be “Where the Wild Things Are,” in movie format. Somebody in our household reminds us of Max. There may be Moscow Mules for the grown ups and ginger ale for the young ones. I hope you have as much joy coming your way.

21,128,670 people across the world have been diagnosed with COVID-19 and 758,391 deaths have been attributed to the illness. Just under 14 million people have recovered and about 6.4 million people remain ill. Yesterday an additional 284,357 cases and 6,649 deaths were reported.

The total number of cases was within a little over 1,000 of the day before, and it is remarkably similar to the same day in previous weeks: roughly 281,000 last week, 287,000 the week before. As a result the seven-day moving average barely budged upward to its current level of 260,634. That upward move of a couple of hundred, however, was enough to make it the new high since the beginning of the pandemic.

The 6,649 deaths yesterday marks three consecutive days above 6,500 deaths, a string which had not happened since last April when it happened three different times. The number of deaths were about 200 more than a week earlier, moving the average to 5,934, still about where it was in late April. Countries reporting the most deaths yesterday remained the same, though in shuffled order: Brazil (1,301) the U.S. (1,284), India (1,006) and Mexico (737).

The top four countries for new cases also remains the same and the top three combined are equivalent to 63% of the world’s total new cases for the day: India (64,142), Brazil (59,147), the U.S. (55,364) and Columbia (11,286). Thirty-one different countries reported 1,000 or more new cases yesterday. Thirteen of those countries are in the Americas, while the others are spread around the world. Spain had the 12th most new cases yesterday (2,935), followed closely by France (2,669) at 13th. The two countries are seeing their biggest new case numbers since March.

Here’s a look at the current surge in Europe. Iraq reported a record number of daily cases yesterday. England has launched a new COVID-19 app, similar to others in use elsewhere. They hope to have 70% of those at risk using the app. The app uses location and time data to determine who has been exposed to a person who has been diagnosed. The users get an automatic notification, reducing the need for labor intensive tracing and removing inaccuracies resulting from interviews. Germany has successfully used such an app for months.

Yesterday’s number of cases reflects about a 3,300 drop in cases from the same day a week earlier and the seven-day average now sits at 54,503 new cases per day. The number has remained in the 54,000 to 55,000 range for a week, after dropping for the three previous weeks. The drop of 12,000 new cases per day seen since late July is largely attributable to the drop in Florida (-5,200) and Texas (-3,000). Both states have severely reduced testing numbers during the same period.

The 1,284 additional deaths yesterday compares to 1,203 the same day the previous week. The extremely slow rise continues, with the average daily deaths moving up by thirteen from yesterday, to 1,080. The number is similar to the number of daily deaths seen in late May. Three states reported more than 100 additional deaths yesterday: Texas (274), California (186) and Florida (147).

A single school district in Georgia has over 1,000 students and teachers now under quarantine one week after beginning the school year. There are 59 confirmed cases in the district which has seen a widely shared photograph of unmasked students posing together. The CDC is now predicting between 180,000 and 200,000 American deaths from COVID-19 by September 5. The Institute for Health Metrics and Evaluation, a source used early in the pandemic by the White House Task Force is currently predicting just over 295,000 deaths by December 1.

Yesterday, the state of Tennessee reported an additional 2,118 cases, an increase of 43.3% over the previous day. The state reported 27,956 tests, an approximate 48.2% increase from the previous day, as the two numbers continue to fluctuate in parallel. The best news regarding testing is that, with the increased testing, the positivity rate has dropped to 8%, still too high, but lower than it has been in weeks.

1,861 people were moved to the recovered category yesterday, pushing the total number who have recovered to over 89,000. An additional 24 deaths were reported, bringing that total to 1,313 Tennesseans who have died during the course of the pandemic. The number of active cases is 38,047, which compares to about 37,600 each of the last two weeks on the same day.

The Knox County Health Department is reporting 99 additional cases today (identical to yesterday), bringing the total since the beginning to 5,134 cases in the county. 3,077 people have recovered and 2,192 people remain ill. The number of active cases has been consistently in the 2,000 to 2,300 range for the first half of August.

Charity Menefee started by thanking the media for their coverage. She discussed ride sharing and encouraged people to wear masks, get fresh air into the car and sit as far apart as possible. She said do not share rides if you are feeling ill.

Testing will be available M-W-F. Briefings next week will move to Tuesdays and Thursdays and benchmarks will be updated on Wednesdays. She confirmed the above numbers.

*Please note I am summarizing rapidly as questions are asked and truncating responses, sometimes without the question if not needed. Any perceived bluntness, etc. may be a result of that process.