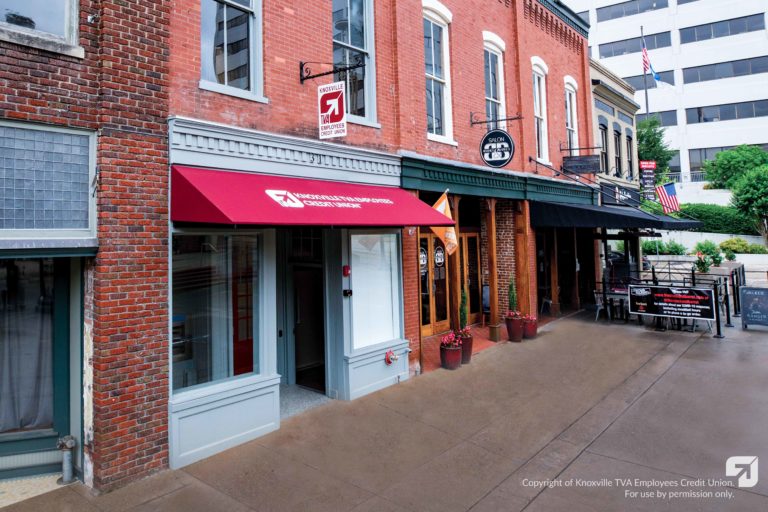 As first covered here last August TVA has now officially moved its downtown branch to 31 Market Square. The short move around the corner reflects changes in banking over the last decades. No one could have known at the time that the move would come during a pandemic, but with the trend toward less in-person banking likely to now be accelerated, the need for massive bank lobbies is now a relic of the past.

31 Market Square, most recently home to Bluetique, which occupied the spot for about 5 1/2 years, has been minimally altered. The once dark grey paint color was lightened, which highlights the dentil molding which tended to recede from sight with the darker color. A brighter awning bearing the TVA Credit Union Logo has replaced the previous awning.

A new entry was built into the left window bay in order to accommodate the new location for the ATM. The arrangement allows access at all hours, some protection from the elements, and visibility through the clear glass that remained on the front.

Inside, you’ll find 2,000 square feet of efficiently designed space. George Armour Ewart Architect led the design effort. It might seem contrary to have a smaller space when we’re supposed to remain distant, but the floor is clearly marked six feet apart in front of the two teller windows. In a rush, a line might be forced out the door a bit, but there is rarely a rush at any brick and mortar banking location or at this branch. 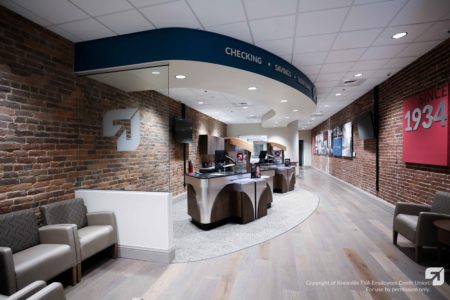 If you walk by the old location at the corner of Wall and Gay, you’ll find it closed. Sale of the building is to be finalized to Cocoon Resources, a venture firm investing in health technologies. I hope to have more on that, soon.

At the new location, you’ll find the same services you enjoyed at the other location, but in a more compact space right between the Chamber of Commerce and Stock and Barrel. You’ll even find your favorite tellers. In addition to other banking services, they offer a coin machine, money orders and cashier’s checks, notary services and wire transfers.