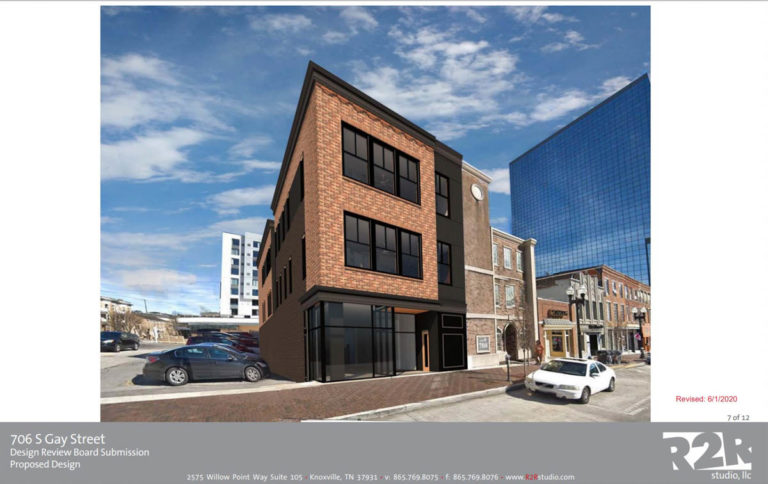 The building at 706 South Gay Street will soon get a major makeover. The building, which is currently empty sits at the north end of the row of buildings on that block facing west. It is beside the parking lot which also contains The Flower Pot. Currently empty, the building contains original masonry walls along the sides and rear, but the facade is not the original and is made of “metal stud framing with a thin brick veneer.”*

If you’ve looked at it and wondered why the brick didn’t look just right on the facade, it’s because its much newer and is more like a faux brick siding. The close-up picture of the damaged section of veneer along the front shows what’s inside and how thin the surface really is. The original portions of the building will be preserved, though altered, while the front will be removed and replaced with a modern design.

There will also be additional space, as the building, currently two-stories above ground at Gay Street and dropping to a single story in the back half of the property. A single story will be added to the front and two stories will be added to the back, leaving three stories above ground and a basement floor that can be accessed directly from the rear. This will make it about the same height as the thin tower on the adjacent building.

Windows will be added along the sides on two floors and the brick will be painted, as well as “architectural metal panels,” to make the look of the side of the building match the front. The front will have a more modern commercial entryway, with glasses and a recessed doorway. A residential entry will be added to the left (south) of this doorway.

A light well will be added in the center of the building in order to allow additional natural lighting to the planned units on the top floors. At the bottom of that well, a skylight will be added to bring the light into the first floor commercial space.

The building is owned by Hatcher-Hill Properties and the design for the space, included here, is by R2R Studio. When finished, the building will have a basement level commercial space, as well as a single unit at that level, accessible via the rear at ground level. The first floor will mirror the basement, with a commercial space occupying the front (roughly) 3/4 of the floor and a residential unit in the rear. The first floor residential unit will be accessible from the side. This unit is designed to be handicapped accessible.

The two upper floors will be completely residential and each will contain two larger units on the front and rear of the building, separated by the light well. Whereas the basement unit is a single bedroom and the first floor unit is an efficiency, each of the four upper units are to be two bedrooms and two bathrooms. Washer/dryer connections are included in all units, which will each be for lease, not purchase.

*All quotes are from the Downtown Design Review Board application submitted by R2R Studio and the accompanying summary by staff.