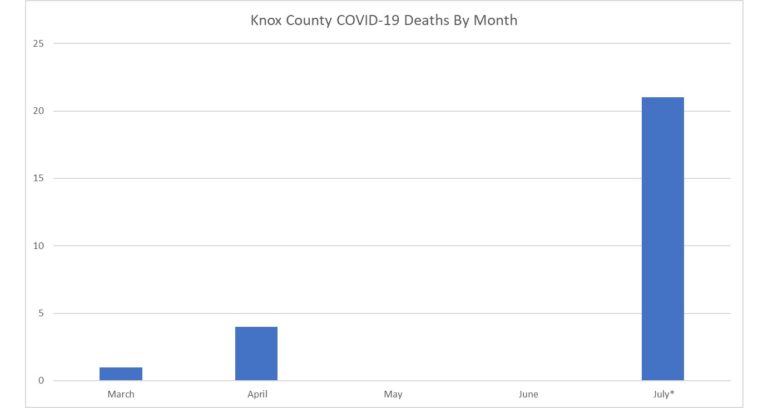 There is only so much I can pack into my afternoon articles, so with Dr. Birx’ visit to Tennessee, yesterday, and the requests I’ve received for monthly charts, I decided to take this morning to discuss the visit and to introduce the charts that I’ve put together. Some readers felt that since we’ve made it through several months, now, it might make for a better graphic demonstration of where we are if we could see the data aggregated more than simply by days and moving-average lines.

Starting with the bar graph seen above, it’s pretty clear what has happened in Tennessee. While we became concerned in March regardging the virus, in retrospect, it really hadn’t landed in terms of cases. It may have seemed like a lot at the time, but 2,389 would eventually become a typical day in the state. Cases nearly quadrupled in April (8346) and that got our attention a bit, so we mostly sheltered at home.

In mid May we started getting back out and reopening businesses. Cases grew to 12,271. In June, many people continued to behave as if nothing were amiss and cases almost doubled (20,503). But July, which is still in progress, is where we’ve really begun to experience the surge of cases. Through July 27, we’ve had 50,427 cases in the state. We added 150% to June. We’ve added more cases in July than in all the other months combined – with four days to go.

In March, as we read about the horrific situations in New York and other places, there was a a disconnect in Tennessee. That was there and this was here. Even as our cases grew, many pointed out that deaths were modest in number relative to other countries, states and  even illnesses. In March, with 23 deaths in the state, few of us knew anyone who had died.

In April and May, the number grew, but remained low relative to other locations. We crossed 150 in each of those months. By June we were largely open for business from Dollywood to Graceland. Deaths closed in on 250. A month later deaths remain modest by other state’s standards, but have risen by over 50% from June, with four days remaining.

But we tend to think hyper-locally. Sure, Tennessee’s numbers were going up through those months, but we shop, work and hang out in Knox County, and in Knox County cases were low. The state numbers represented Nashville and Memphis. Many here felt we were fine. It was almost mystifying that our cases remained so low. Did we have a superpower? We had 62 cases in March, which was so low that when it nearly tripled in April to 169, most of us still didn’t know anyone who had been tested, let alone had gotten a positive test.

Probably due to sheltering in place, we went into May in great shape, even reducing our modest number slightly to 163. But then it went up by 221% in a single month in June, to 524 cases. Some were alarmed and others went on vacation without masks. So far in July, in Knox County, we’ve had 2,278 cases confirmed, an increase of 322%. Many of us know someone who had it. I know two people directly and others through friends. It’s different now.

As it became harder to ask your friends on FB if they knew anyone who had it and not get a positive response from someone, the conversation locally shifted to deaths. People posted funny comparisons to the low number of people who had died. And it was true for so long. We seemed charmed, maybe somehow made of better stuff. A single death in March, was followed by four in April. May and June, with no additional deaths, prompted ridicule on social media for anyone who thought the illness was a problem.

Then came July. With 21 deaths, so far, we’ve had nearly a death each day after having none for the previous two months. With four times as many deaths this month as all the other months combined, we’re beginning to get a picture of which of our neighbors are dying. Twelve are 75 and older, but fourteen are 74 and younger. Eleven are below 64. Three are below 44.

Forty-eight people below age 44 have been hospitalized, compared to thirty-seven people over 75. Slightly more males than females have been hospitalized, but significantly more males have died (17- 9). We only know race and ethnicity for 21 of those who have died. Nine were black and twelve were white. Of these, two were Hispanic and nineteen were not.

It’s against this backdrop of rapid state increases, that the White House has targeted Tennessee, along with other states, including our neighbor to the north, Kentucky, for focused attention. Dr. Birx visited Kentucky on Sunday and Tennessee on Monday. You can see the full press conference in the video below.

Her message to each state was the same: Wear masks, close bars, reduce indoor restaurant seating to 25% and limit social gatherings to ten or fewer. She urged people who vacation in hot spots to not see high risk friends and relatives for two weeks after they return. She said if we do these things, children can go back to school, businesses will be able to remain open, and we can have SEC football.

She said the state is at an inflection point and, while advocating for a state-wide mask mandate, she said every “rural mayor” in the state needs to require masks. She noted that due to high rates of diabetes, obesity, heart disease and other issues, many Tennesseans are at high risk. She said Tennessee is now a “red” state, meaning its positive test rate has surpassed 10%.

Regarding schools, she said each school district has to make its own decision, but said you want to see “caseloads dropping, positive test rate dropping,” and then open if you can ensure safety. As she made clear, however, Tennessee has increasing caseloads and test positivity numbers.

She pointed to the evidence that these measures work as well as closing down, if we would simple wear masks (100%, she said) in public, close bars and reduce indoor seating at restaurants. She said Arizona did these things and is now seeing a drop in cases over the last four weeks. Nashville is seeing the same results after taking the measures. She pointed out the two symptomatic, Covid-positive hair stylists in Missouri who worked with 139 clients. The stylists and the clients all wore masks. Zero were infected.

She stressed the illness is spreading in rural counties and is spreading in nursing homes. In response to a question, she said, “I don’t think the governor has anything against mandating.”

The governor spoke next and said he’d been to counties with mandates and seen people not wearing masks. He said we need to wear them and he thinks people will as they realize the importance. He said he appreciates the recommendations, but has no intention of mandating masks, closing bars or reducing restaurant capacity.

The day after Dr. Birx’ visit to Kentucky, Governor Beshear announced that starting today, bars will be closed for two weeks and restaurant capacity will be reduced to 25%. He also recommended that schools wait until the third week of August to consider in-person classes. Masks have already been mandated in the state for indoors and social gatherings are already limited to 10 people.