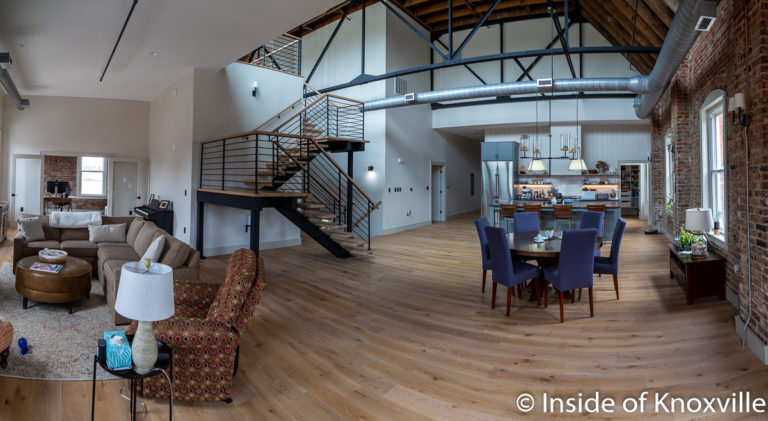 800 Block of Sevier, Corner of Sevier and Barber, Knoxville, June 2020

There are times in our lives when we simply reach a point that we’re ready for a change. Sometimes that change can be small and other times it might be dramatic. That was the case with Ken and Debbie Hill who’d lived for years in a very nice and comfortable subdivision in West Knoxville. With their children’s departure from the home, they wanted something very different. So, after considering purchasing in the heart of downtown, they bought a building on Sevier Avenue and began a new adventure.

I’ve written about the two businesses currently occupying the commercial spaces fronting Sevier Avenue. Sweetbrier Boutique at 820 Sevier Avenue and Loveliest Bridal beside it at 822 Sevier Avenue each opened early this year and, after the interlude, are now open once more. The beautiful space each inhabits looked very different when the Hills purchased the building.

The exterior of the building bore graffiti and a rusted fire escape on one side. The front windows were boarded over with plywood. But the building spoke to them and they felt they could do something special there. The exterior now looks lovely and during the pandemic they’ve built two patios behind the building so the guests in their Air BNB units will have an outdoor space.

The couple, in 2015 had considered purchasing a building with the intention of opening a hostel or boutique hotel in downtown. When the building boom for hotels hit downtown, they knew that wasn’t the direction they wanted to go. Still, they wanted some element of sharing their home and decided Air BNB might be the way to go. They purchased the building on Sevier Avenue in October of 2018 and they say some of their west Knoxville neighbors thought they’d gone a little crazy.

The Hills had lived in the Bennington subdivision in west Knoxville since moving here from San Francisco in 1995. Ken is originally from California and Debbie is from Denver. Ken’s technology company gave him five options across the U.S. The couple visited each one and they said “Knoxville felt like family.”

They raised children in the city and Knoxville is now home. Debbie said part of the impetus to consider something different came when their children married and moved out of the family home. She described the feeling as an “adventurous itch” to do something entirely different. She said they didn’t want to sit at home and be empty nesters, rather, they wanted a new adventure. They’d always loved historic buildings, so the appeal to restore something old into something new was very appealing.

As they began looking around downtown, the south side of the river drew them. They love the outdoor options in the area. They’ve also enjoyed the relationships they have in their new area, from their homeless neighbors who sometimes enjoy their back patio, to their new friends at Everything Mushrooms and the workers at High Wire, which is next door. They’ve joined in the work in the community garden adjacent to their building.

Debbie said before the pandemic hit they’d hosted the leadership from a UT fraternity, BYX, and sharing the new space was always a part of the vision. The two Air BNB units they built into the rear of the building’s second story are another way they enjoy connecting with people. They said some want to connect and they love directing them to trails or parks or elaborating on an item of interest to the guest in the guidebooks that Tim and Debbie have developed for them.

They said they’ve already hosted a range of people. They had a bridal party rent the units and when I visited they had a couple from Louisiana who wanted a change of scenery and a couple who is building a home and waiting for it to be finished.

The building dates to around 1910 and at one time housed Parker and Crisp Grocers on the first floor. The second floor was a union hall and still had a stage when they purchased the building. Their original vision was to build two narrow condos running the length of the building. With help of their team, they came up with the current design which has two rental units to the rear and their home on the front.

The designer/architect for the project was Jim McDaniel with Benefield Richters. Jennifer Justice Interiors was responsible for interior design (and the photos of the Air BNBs used here) and Christopoulos and Kennedy did the construction. Ken and Debbie said the entire group felt like a true team and their weekly meetings often produced new ideas or novel solutions to the problems they encountered along the way.

The front section of the building was completely re-imagined to transform it from Union Hall to the beautiful home it is today. The former 11 foot ceilings were opened up to reveal large sweeping trusses supporting a 21 foot ceiling. Ken said the structure, including the roof was in good shape.

They did add structural enhancements allowing the front of the building to be elevated. The additional footage was enclosed with large, north facing, windows which flood the open floor space below with beautiful light. It also allowed for a mezzanine level office/bedroom which opens out onto the rooftop deck. The view from the deck looks each way up and down Sevier Avenue and also affords a view of the Gay Street Bridge and UT campus.

The majority of the 2400 square foot home is taken with a sweeping open concept with living, dining and kitchen space. The space includes the stunning staircase to the mezzanine level and a modern inset fireplace. The vaulted ceiling, with the metal i-beam, wood joists and the exposed brick of the exterior walls incorporate the original structure into the aesthetic, making an industrial space with the warmth of a home well-loved.

In order to retain the visual effect of the ceiling, the insulation was placed on top of the roof. Along with new wiring, plumbing, HVAC, sprinkler system and alarms, they also had to have an eight inch water line run into the building. It was a long, tough process, but one they seemed to find very fulfilling. The finished product speaks for itself and even won over their friends who had been skeptical early on.

They’ve enjoyed their proximity to things they enjoy, like walks to nearby Suttree Landing Park and Fort Dickerson. They’ve enjoyed mountain biking on the urban wilderness trails, exploring Ijams and the quarries,  and they’ve recently discovered High Ground Park. The feel they found (along with the help of leasing agent George Brown) the perfect tenants for the storefronts. If your interested in exploring the Air BNB rentals more, you’ll find them here and here.

It’s a very different life than they’d know before, but they seem to have found just the adventure they were looking for.