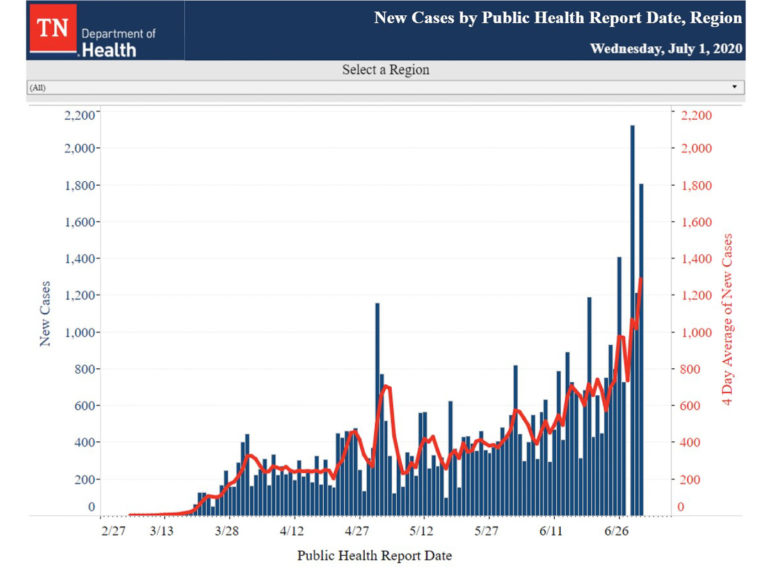 The announcement that masks are now required inside buildings in Knox County has certainly dominated today’s local news. Predictably, it has drawn diametrically opposed reactions ranging from relief at an overdue simple action, to outrage at the infringement on our constitutional rights. With the rate of infection we are seeing, the Board of Health felt compelled to act. The County Mayor and the Law Director vehemently oppose the action. This won’t likely be the end of local conflict on the topic and your heroes and villains likely depend on what you believed before any of this happened.

There were more new COVID-19 cases confirmed in the world yesterday than any other day since the pandemic began.

The 196,963 cases for the day bring the total to 10,847,016. It surpasses the previous record which was set last Friday. There were 4,847 deaths worldwide, bringing that total to 519,963. Both new cases and deaths continue recent trends, with new cases trending upward sharply and deaths leveled off and perhaps dropping slightly in the last week. The current average new daily cases is just over 179,000 cases per day and deaths are averaging just under 4,500.

Regarding worldwide trends, they remain the same, only more so, if that make sense. Three countries continue to dominate in new cases and represent well over half the new cases yesterday: The United States (51,097), Brazil (44,884) and India (19,428). While these three counties contributed almost 60% of the new cases for the day, 22 countries added at least 1,000 cases.

The concentrations around the world continue to be the same, with some of the highest rates of increase being seen in South Africa, Colombia, Argentina and Iraq. Brazil, the U.S. and Mexico led the world in deaths yesterday, in that order. Colombia has a small number of deaths, but their rate of increase is among the highest in the world.

There were more new COVID-19 cases confirmed in the United States yesterday than any other day since the pandemic began.

The United States added 51,097 new cases yesterday to bring the total since the beginning of the pandemic to 2,779,953. This is about 2,700 more cases than the previous record, which was set last Friday. It brings the total active cases to just under 1.5 million. The infections continue to be disproportionately represented by young people, which may explain the continued drop in mortality.

There were 676 deaths reported from COVID-19 in the U.S. yesterday, bringing the total number of Americans who have died from the illness to 130,798. If there has been good news in recent weeks, it has been the continuing decline in deaths. The current daily average is 560 deaths, whereas it peaked at 2,255 in late April. Preventing transmission from the newly infected young people to their parents, grandparents and old co-workers is the next challenge in the battle to keep death rates low.

Additional economic stimulus is back in the news with President Trump saying he favors bigger payments than those in the Democratic plan. He’s also touting the economic growth over the last month as the news is reported this morning that the unemployment rate has dropped to 11.1% for the month of June. Of the virus, he told Fox News yesterday, “at some point, that’s going to sort of just disappear, I hope.”

There were more new COVID-19 cases confirmed in the state of Tennessee yesterday than any other day since the pandemic began.

There were 1,806 new cases of COVID-19 reported in the State of Tennessee yesterday. While one bar on the above graph is taller, that was a two day total. It brings the total cases in Tennessee since the beginning of the pandemic to 45,315. 684 recoveries were reported yesterday, as well as five deaths. The active case total grew for the day by 1,117 to bring the total number of active cases to 16,423. The total deaths in Tennessee is now 609.

Fifty additional people were hospitalized across the state yesterday and the state reports administering almost 25,000 tests to bring that total to almost 818,000. The number of tests being performed across the state has risen significantly this week, and reports are increasing of more people wanting to be tested, but finding delays in testing and result reporting. As would be expected with a dramatic increase in testing, the positive rate has dropped slightly, but at 8.1% is still far above the desired level.

There were more new COVID-19 cases confirmed in Knox County today than any other day since the pandemic began.

The Knox County Health Department is reporting 70 newly confirmed cases of COVID-19 today. This is a 40% jump from yesterday’s number and yesterday’s number was the second highest reported for any day at that time. The top three worst days for Knox County cases all occured this week. More new cases have been added in the first five days of this week than in any other week since the beginning of the pandemic.

Knox County now has reported a total of 1,047 cases of COVID-19. Over half of these have come in the last three weeks. There are now 323 active cases in the county; a new record. 18 people are currently hospitalized and the Health Department reported one additional death overnight to bring that total to six. There are 28 probable cases.

The major shift since yesterday, in addition to the large increases in cases, is that everyone in the county is now required to wear a mask when going inside a building other than their homes, a school or a place of worship. The City of Knoxville had previously announced masks are required when indoors on city property.

Knox County Mayor Jacobs is opposed to the new rule and the Knox County Sheriff’s department, like a number across the country, has said he will not enforce the new requirement.