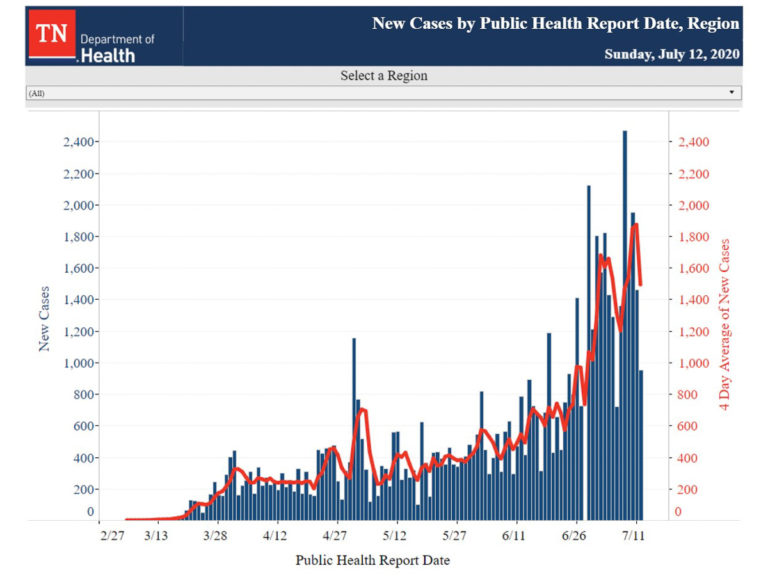 Welcome to another week. I hope you each had a chance to get away from the news for a bit. There’s been a lot to absorb for a long time and it looks to keep coming at a rapid pace. Hang tight, support each other and we’ll get through this to the other side.

Since the beginning of the pandemic, 13,084,872 people worldwide have been diagnosed with COVID-19. The number crossed 13 million yesterday, only four days after hitting 12 million. A total of 572,556 deaths have been attributed to the disease. Since the last article, a daily record 236,918 cases were reported on Friday.

Yesterday, 196,733 new cases were reported, about 18,000 more than the same day the previous week. The daily average continues to climb and currently sits at its highest point: 209,401 cases per day. There are currently just over 4.9 million active cases across the world.

Worldwide deaths, which have been a source of hope and encouragement since peaking in mid-April, are now clearly, if slowly rising. 4,118 deaths were reported yesterday. A week earlier the number was 3,607. The seven-day moving average of reported daily deaths is now 4,944. At its lowest following the decline, the seven-day average was 4,106.

It’s worth noting that the number of cases worldwide plateaued about April 26, before beginning a slow rise, followed by sharper increases starting in Mid-May. Deaths fell until the end of May and began a sustained upward move that has escalated in early July. It would seem for all the hopefulness, there is a simple reality that deaths trail new cases by about six-to-eight weeks. We can hope to hold percentages to lower levels than those early in the pandemic, but with the rate of daily cases now dwarfing that earlier in the pandemic, it does not bode well.

The United States, Brazil, India and Mexico continue to be the biggest drivers for the worldwide surge in cases. The United States diagnoses about the same number of cases each day as the other two combined each day. Yesterday’s numbers show the pattern: U.S. (58,349), India (29,108), Brazil (25,364). The three countries represented over 60% of new cases globally for the day. South Africa added 12,058 and has one of the highest rates of increases of all countries.

Twenty-four different countries reported at least 1,000 new cases yesterday. On Saturday, there were twenty-five countries on that list. Nine of the countries are in south and central America. A number of those countries, perhaps most glaringly, Mexico, have very light testing programs, meaning the true numbers are almost without doubt much higher.

As India struggles with an increasingly large outbreak while feeling forced to re-open its fragile economy, arguably the biggest movie star in the country and his family have tested positive. Hong Kong is experiencing a resurgence of cases and has re-closed schools and shut Disneyland Hong Kong, once more, after opening about three weeks ago. In Okinawa, Japan, 62 new cases emerged and 39 of those were U.S. soldiers based there. Later another 32 cases among the troops were confirmed, all of which led to a strain between the two countries.

3,432,661 cases of COVID-19 have been reported in the United States since the beginning of the pandemic.  A new daily record was set Friday at 71,787 cases. Yesterday’s total was 58,349 new cases, which compares to 45,931 one week earlier. The seven-day average for daily cases continues to rise and now sits at its highest point since the beginning of the pandemic at 60,114. The number of new daily cases are almost twice what they were when the economy was shuttered in April.

137,842 American deaths have been attributed to the disease. Yesterday, 380 Americans died from the illness. This compares to 262 the same day one week earlier. While still much lower than previous highs, deaths clearly increased last week, with seven consecutive days of increases in the seven-day average, which now sits at 740 deaths per day, about where it was in mid-June.

As with world-wide cases and deaths, the math simply dictates a delayed relationship between cases and deaths, though as we’ve discussed, age of patients, better understanding of the course of the illness and better medical preparedness might make the relationship somewhat less. New cases in the U.S. hit its lowest point in the initial decline on June 11. Deaths started increasing four weeks later.

The initial increase in cases was small, escalating about a week later. Whether deaths will be as bad this time remains to be seen, but there doesn’t seem any way that we can have double the number of daily cases and not see increases in deaths as a result. That appears to be what we are seeing.

The White House escalated its campaign against Dr. Fauci over the weekend, with Peter Navarro, White House trade advisor saying this morning, “he has been wrong about everything I have ever interacted with him on.” Their rift apparently started when Dr. Fauci would not endorse the use of hydroxychloroquine.

At least 26 members of the Mississippi legislators, many of whom refused to wear masks or keep distance in recent weeks of work, have been diagnosed with COVID-19. On Friday, the governor there issued an order requiring masks in 13 counties with large increases in cases. President Trump was also seen wearing a mask for the first time in public this weekend and his administration stressed the need for mask usage in yesterday’s press interviews. “Adm. Brett Giroir, an official with Health and Human Services, acknowledged that with “more cases, more hospitalizations,” the expectation was for “deaths to go up” over the next several weeks.”

If there was a spot where we might draw at least some momentary encouragement, even though it may or may not continue, it is at the state and local level. The numbers continue to be serious, but there was some improvement in spots over the weekend. Here’s hoping we can sustain it.

After setting a single-day record on Wednesday of 2,472 new cases in the state, Tennessee reported declining new case numbers through the weekend, with 1,955 on Friday, 1,460 on Saturday and 954 on Sunday. Sunday’s numbers were smaller than those of a week ago. The four-day moving average of 1,494 remains among the highest points reached so far.

With deaths and recoveries over the weekend, there are now 25,364 active cases of COVID-19 in Tennessee. On Friday, that number was 22,565, meaning we netted about 2,800 active cases for the weekend. There were 685 total deaths as of Friday and there are now 741, for a weekend increase of 56. The current seven-day average for deaths is 13 per day after that average crossed 10 for the first time last week.

57 additional people were hospitalized yesterday, but there is some good news on that front: Hospitalization rate for the illness dropped slightly over the weekend, from a peak of 842 on Thursday, to 802 as of yesterday. Pending cases among hospitalized patients has also dropped, from a high of 379 last Tuesday to 318 on Sunday.

Testing reported by the state seemed to have declined last week, perhaps due to the bottleneck that is happening at labs. The number of tests remains higher than earlier and higher than many other states. The bad news is that even at a higher rate of testing, the rate of positive tests continues to rise well above the 5% benchmark and now sits at 8.6%, meaning we are not finding an adequate percentage of the cases to stop the spread.

Locally, the numbers are also encouraging, but they may not be accurate. Due to test result delays, Dr. Buchanan said today that the lower numbers for the last several days may simply be signaling a delay in test results. Still, the numbers did temper a bit at the end of the week, though what passes for an improvement, about 40 cases a day, is twice has high as what Dr. Buchanan said was a concerning number just a few weeks ago.

There have been 102 new cases reported over the weekend, with 42 of those coming today. Active case numbers now total 736, which is about 70 more than reported on Friday. 41 Knox County residents are currently hospitalized, up from 34 on Friday. An additional three deaths were reported in the county overnight, bringing that total to 13. There are 63 probable cases at this time.

Dr. Buchanan started today’s press conference with gratitude to those who are helping with contact tracing, including library staff. She said testing will continue this week from 8:00 – 2:00, but due to demand the lines may be cut off early and there will be waits. She also cautioned about a local parody account on social media.

She confirmed the above numbers. She expressed sympathy to the families of the three people who died yesterday. She asked for patience with reporting data as it is a new venture for everyone. There are currently lab delays. For this reason, she believes the low numbers over the recent days are due to testing delays and do not reflect the current situation.