A Look Inside the Dazzling Embassy Suites 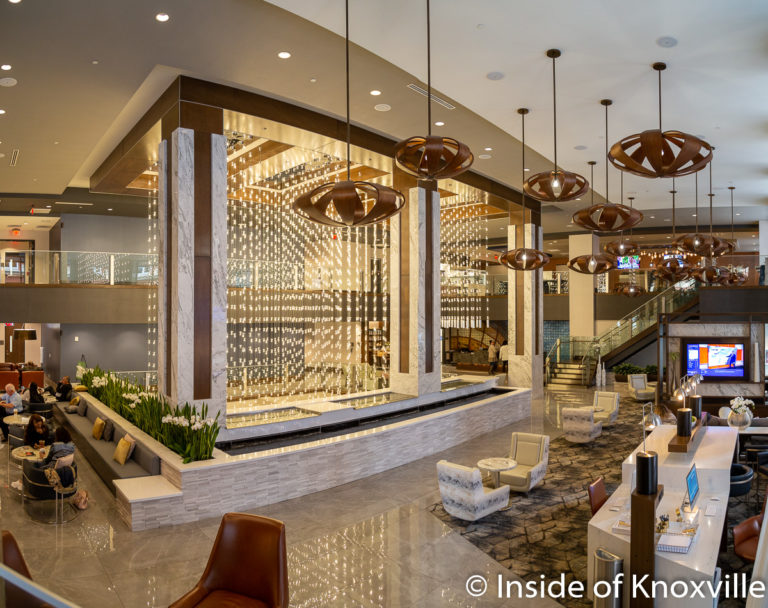 My timing on articles in recent months has been thrown off by personal variables and, now, by a pandemic. I would normally post photographs from inside a new business just as it opens, but I missed that with the Embassy Suites Hotel on Gay Street. In March I met with Alpesh Patel to chat about the hotel and take the photographs you see here.

The intention to put out an article in the following week was swept away by other events. Soon, the hotel was nearly empty and I became a health reporter. Now that businesses are opening back up and the hotels are again seeing visitors, it seemed like a good time to dust off the photographs and update my conversation with Mr Patel.

As you can see from the photographs, the space is absolutely beautiful. The lobby with its light and water features and living wall is a delightful space. Fusion Architectural Interior Design guided the design process resulting in what you see when you enter. The main floor also boasts three additional businesses, including Top Golf, Wake Foot Sanctuary and Spa and K-Brew. The mezzanine level includes Knox Mason and C.J.’s Tacos.

Mr. Patel said, “We operate several hotels (Ed. Note: 67 hotels), but this is our baby. We wanted to implement changes and improvements as quickly as possible. We want people to have a better experience each time they come.” They had baptism by fire as the hotel opened to full occupancy as the Garth Brooks concert was the next night.

He said the feedback has been overwhelmingly positive. “We had a dream and we made a huge investment. The details and where we spent the money have been very well received. We’ve been working to improve the experience every day. I get texts and emails @ 2:00 AM from lead bar tenders and others.”

What started with a busy and challenging weekend, continued. Until the pandemic struck, all sections were busy and he called that “a good problem to have.” He said the Radius Lounge was busy all winter despite the fact that it was often too cold for patrons to use the outdoor areas.

Plans continue for possible improvements in the future. Alpesh has his eye on a spot on the roof that might make a good space for a mural, for example. He’s also considering adding outdoor games.

One of the surprises has been the number of bookings by people in the city or the immediate area. The number one feeder city is Knoxville. At the time we initially spoke, he said the hotel was hitting its budgetary goals for rooms, Top Golf was very busy, the Radius Lounge was going well, the spa had been well received and was in need of additional massage therapists, especially for the weekend.

They are also exploring expansion of the capabilities of the Top Golf space. There is a possibility of X-Box connectivity, movie viewing and using the space for video conferences. He said use of the suite had ranged from very serious golfers to the much less serious Zombie Dodge Ball.

And then the shut down began. Overnight, hotels were virtually empty. Staff had to be furloughed. By early April staff at the hotel were distributing food boxes to furloughed workers in the service industry. The entire hospitality sector took a body blow. Outside of a few first responders and others who had to travel during the pandemic, the rooms sat empty.

I spoke with Alpesh earlier this week to see what is happening since the opening of so many businesses. I also have a view from my home of the parking lot where the cars are valet parked and noticed that it was much more filled this past weekend than it had been in two months.

Alpesh said, “It picked up this weekend, but it is soft in the middle of the week.” He said leisure travel is back to a much greater degree than business travel, which is still very scant. He said they’ve seen bot local stays resuming and people who are driving through. I noticed a number of Uhaul trailers and trucks in the parking lot this weekend, perhaps indicating people are making moves, again.

The experience, of course, has changed in a number of ways. Hilton has installed their “Clean Stay,” program which goes above and beyond protocol with cleaning and emphasizes hot touch points which are treated often with lysol. They’ve also partnered with the Mayo Clinic and are exploring electro-static cleaning with them.

You will find a no-touch check-in and you will not see a breakfast buffet. Alpesh suggests those may simply be a thing of the past. In its place, the hotel is offering single-service, individually wrapped items for grab-and-go. You will find all businesses open (the spa opens Friday) and C.J.’s Tacos is delivering to the Radius Lounge on the rooftop. All businesses, including the rooftop are open to anyone, whether an overnight guest at the hotel or not.

Alpesh said some customers are very cautious and wearing masks, while others seem less concerned. His front desk workers and food and beverage workers are wearing masks, but back-of-house workers, such as house-keeping has the option. They are booking contained eight person groups for Top Golf and cabanas on the roof top can be reserved in order to assure some separation.

While business has begun to return, he says he is “hopeful it gets better from here.”