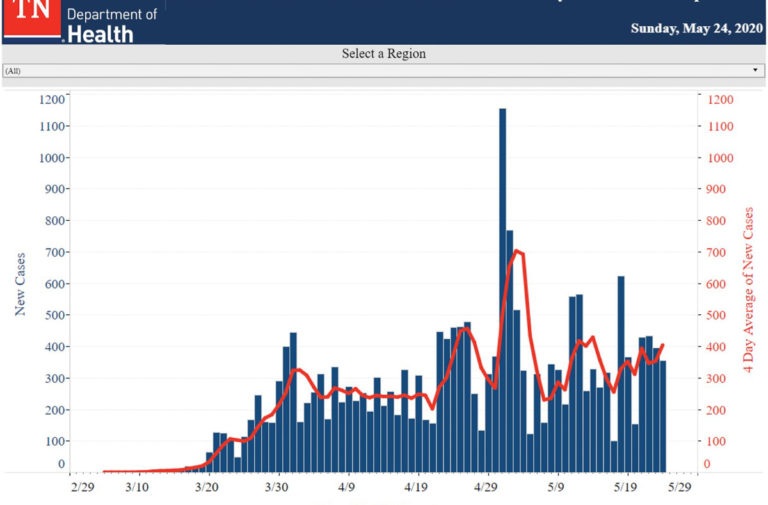 Happy Memorial Day! I hope you are finding a safe way to make the day memorable. Our celebration was the road trip, though we may do a little barbecue later and Urban Woman even made rumblings about wearing some red, white and blue. Getting crazy over here. Let’s take a brief mid-day look at where things stand. Due to the holiday, here is no health department briefing.

As of mid-day today, there are 5,542,074 confirmed and acknowledged cases of COVID-19 across the world. There have been 347,383 deaths. Presumably due to reporting and testing cycles, a seven day cycle continues to repeat, in which the number for Friday is the highest each week. Each of the last three weeks, Friday has reported a higher number than the same day the previous weeks. This past Friday’s total was 107,521 new cases worldwide.

That number is the highest number of new cases reported in a single day since the beginning of the pandemic and must necessarily reflect the current volume of testing, but also represents real cases in the world, meaning that this pandemic has not stopped, but is prevalent in many countries around the world.

There were 96,505 new cases reported yesterday, along with 2,826 deaths from the virus. The new case number for Sunday is interesting in that Sundays or Mondays have been the lowest days for increases in the cycle and this Sunday would rank as one of the highest of any days during the pandemic, another indication we are identifying more cases worldwide. The biggest source of global encouragement comes as the number of reported deaths each day continues to slowly decline. Yesterday’s total deaths is lower than any day since March 25.

The encouraging news isn’t universal, as some countries previously hard hit have improved their situations dramatically while others are seeing serious upward trends. The U.S. continues to lead in total cases and deaths and each day in total cases, but Brazil had the greatest number of deaths from the illness, yesterday.

Brazil’s rate of increase remains dangerously high and they have now moved into second on the list of countries with the most cases. They currently have the sixth highest total deaths. These numbers come with a testing program that has barely scratched the surface with less than 10% of the testing per capita as the U.S.

Other countries in trouble include Russia, which has the third highest infection total in the world. India, Peru, Chile, Mexico, Saudi Arabia and Pakistan continue to have high rates of increase. Notable there is that India, with a high rate of increase and an extremely low rate of testing, is now beginning to open up their massive train system. It’s hard to imagine that ending well, short of a weather-related reduction in the virus. Africa is emerging as a cause for concern among epidemiologists.

If we can open up the economy while continuing that trend, it will be a great thing. There are troubling signs that may not be the case as spikes are being reported in new battlegrounds like North Carolina. North Carolina reported its largest single day increase of the pandemic this weekend even as the governor moves to open the state further. Despite the spike and the efforts to open the state, President Trump tweeted that he might move the Republican convention if packed arenas are not allowed.

It was a continuation of tweets from the president attacking states and governors that he feels are opening up to slow. On Friday he declared houses of worship “essential” and threatened to force governors to open them for worship. Many churches have begun to have worship services while many others have refused.

One of the most troubling stories to come out of the weekend was related to testing. While the president often brags about the number of tests the U.S. has given, which is the most in the world at almost 15,000,000, but ranks 24th in the world per capita among relatively populous countries, those numbers were called into question.

Numbers related to coronavirus have already proven a political battleground as conservative media outlets have begun stating that death tolls have been inflated for political reasons. This stands in contrast to Dr. Fauci and others who say there is likely a significant under-count of cases and deaths.

The latest issue to emerge reveals that eleven states have been blending their total virology testing (to diagnose cases) and serology testing (to see if you’ve had the illness and have antibodies, also call anti-body testing). The two are completely different and to control the pandemic, only virology testing matters. The states are generally saying they have stopped or will separate data going forward. While this inflates the amount of testing we have claimed, it is unclear if the two were merged intentionally to do so, though it appears to be a significant epidemiological blunder.

As of yesterday, the State of Tennessee is reporting a total 20,145 cases and 336 deaths. 356 were diagnosed yesterday and 92 were counted as recovered, meaning the number of active cases great for the day. There are about 7,300 diagnosed and active cases across the state. 7 Tennesseans died from the virus yesterday, bringing total deaths in the state to 336, and 10 were hospitalized. Testing continues to run either side of 10,000 per day and nearly 400,000 tests have been administered.

As can be seen in the graph above, through the first two thirds of April, our four-day moving average leveled off at around the mid-200s. Starting in late April, spikes began, driving the average upward, first peaking in the mid-400s on April 26, then peaking again on May 3 at 702. The next peak came on May 14 when our four-day-moving-average hit 428.

Our four-day moving average, once more has crossed 400, at 403. If you smooth out all the peaks, the numbers show a steady and fairly aggressive increase in new cases in the state since April 21. By late April, the rate of testing had mostly leveled off and has remained about the same or slightly increased since, meaning the increases cannot be accounted for by testing.

In Knox County, the story remains the same as it has throughout. Daily increases are typically in the single digits. Today there was an increase of six confirmed cases, to bring our total to 342. There is only one Knox County resident currently hospitalized and there have been no deaths for weeks.

It’s easy to understand a disconnect between people who are suspicious of government and the media, a number which seems to have increased in recent years and the reports of deaths and illness. A person simply looking around them in Knox County and seeing the economic damage, but knowing no one who has had the illness and/or died and seeing a social media feed filled with skeptics can easily trust what they see over what the national media reports.

In many cases, the virus has so far hit areas of the country that tend to have more Democratic voters, while areas with Republican voters have been spared the worst of it. Additionally, a disproportionate number of the deaths are among blacks and Hispanics, two groups who tend to vote more Democratic. In an interesting article, the New York Times examines differing party attitudes toward the pandemic and offers some tentative explanations for the divergence in perception.

Let’s hope our Knox County numbers continue to be low and that our neighbors remain healthy as we head toward a re-opening of our community. Please be kind to those you encounter. Let them wear a mask if they want to. Acknowledge that others may not wear a mask and they have their reasons. Do the best you can to be the best you can be.