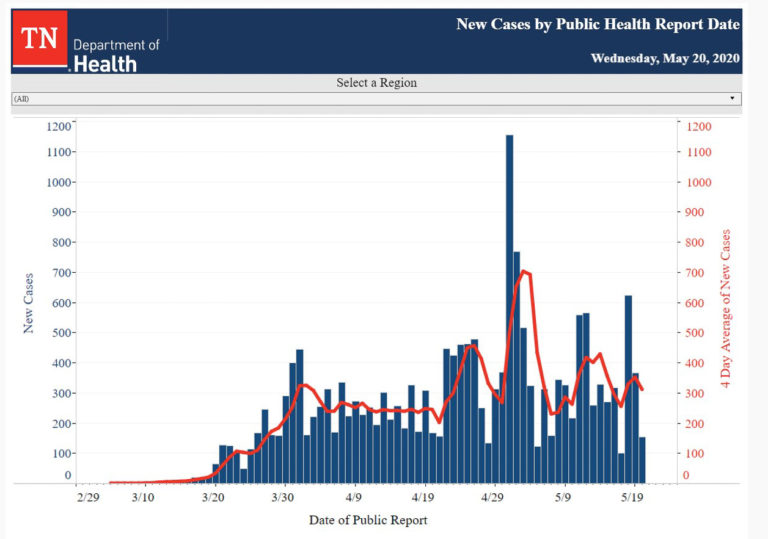 I’m running a bit behind on piecing together today’s report, so I’m going to jump right in. I hope everyone is having a stress-free, good Thursday, or at least a moderately-ok kind of day.

As of this writing, there are 5,128,984 confirmed cases of COVID-19 worldwide. There are 331,010 deaths attributed to the disease. Yesterday’s increases in each category were 100,474 new cases and 4,685 deaths. Yesterday’s new case total is the second highest since the pandemic began, falling only behind April 24 when there were 101,884 new cases.

Clearly, the virus is very much with us. Also, there is more discovery of the virus thanks to dramatically increased testing, but there are also many countries in which testing levels can’t be doing more than scratching the surface of total cases. Reported deaths, as seen in the chart below, have clearly declined. Unless the true numbers of those infected has dropped, the numbers seem suspicious. There have been reports from numerous countries, including some of the hardest hit like Russia and Mexico, that deaths are being vastly under reported.

The U.S. continues to lead the world in total cases and deaths, as well as new daily cases and deaths. That said, in an alarming development for Brazil, a populous country, but one with about 65% of the population of the U.S., they had almost as many new cases confirmed as the U.S., with 21,472. The U.S. and Brazil numbers are less than 1,000 apart and dwarf all other countries. Also alarming for Brazil, they have tested at less than 10% the per capita rate of the U.S., meaning they are finding a similar number of cases and they are, relatively, barely testing.

In addition to an alarming level of the disease, the situation is being compounded by leadership that is looking the other way. He is also advocating the use of hydroxichloroquine. Brazil is now third in the world in total cases and sixth in total deaths. The situation has led President Trump to consider a travel ban with the country.

Total confirmed cases in the U.S. as of this writing have just topped 1.6 million, at 1,600,402 confirmed cases. Total deaths have reached 95,240. Yesterday the U.S. reported 22,140 new cases and 1,403 deaths. Both numbers reflect improvements over the last three-to-four weeks. After ranging around the upper twenty thousand to lower thirty thousand range in new cases, we are now running mostly in the low 20’s daily. Given increased testing, it would suggest the disease is fading for now. But it is an extremely slow fade, still impacting tens of thousands of new people and families each day.

Deaths have shown a similar disconnect to cases as is being seen around the world. While both cases and deaths are diminishing, deaths seem to be doing so more rapidly, though with continued ups and downs in totals. Are we better at treatment? Have we gotten better at protecting those most likely to die? It’s hard to say at this point, and again, the reductions in death rate are cold comfort to the 1,403 families who lost a loved one just yesterday.

The CDC has issued new guidance which suggests that surface infection is less of a threat than previously thought, and that person-to-person infection is the primary source of transference. The CDC also urged that we be “overprepared” for a second wave. An analysis from Columbia University says we could have avoided 36,000 U.S. deaths and 700,000 cases if we had closed one week earlier.

With many, if not most businesses reopening or approaching a reopening, attention is increasingly turning to the Fall and what will happen with colleges. It’s really anybody’s guess as we don’t know what the numbers will look like when that happens. U.T. has announced contingency plans covering several scenarios, but the intent seems to be to have students present.

Notre Dame announced earlier this week that it will begin in-person fall classes early, eliminate fall break and end before Thanksgiving to reduce student travel back and forth to their communities and hopefully ending the session before a late-fall, early winter second wave might hit. California schools have largely announced they are closed to in-person classes. The NCAA announced yesterday that athletes (read FOOTBALL) may return to campus to us on-campus work out facilities starting June 1.

After recording its third highest day for new cases on Monday (after one of its lowest the day before), Tennessee’s numbers of new cases dropped each of the next two days, with 154 new cases reported yesterday afternoon, along with 4 new deaths and 17 new hospitalizations. These are good relative numbers unless, of course, you or your family are directly impacted.

Since the beginning of the crisis, 18,532 Tennesseans have been diagnosed with COVID-19 and 309 have died. Testing seems to have leveled off, with 7,890 tests given yesterday. Tennessee ranks seventh in the country in testing per capita.

Locally, the Knox County Health Department reports a total of 1 new cases and no new hospitalizations or deaths since yesterday. There are 35 active cases and 5 probable cases. The county will begin largely allowing the reopening of all businesses starting next week. Totals for the county since the beginning of the pandemic are 323 cases and 5 deaths.

Charity Menefee chaired today’s meeting thanking the Army and Air National Guard for their help with testing. She said more industry-specific guidance will be issued tomorrow for next week’s lessening. She urged everyone to continue distancing, hand-washing, disinfecting surfaces, wearing masks and staying home if ill. She repeated new guidance from the CDC that surface-caused infection is much less likely. She emphasized that wearing a mask is a sign of concern for others, not a protection for yourself.