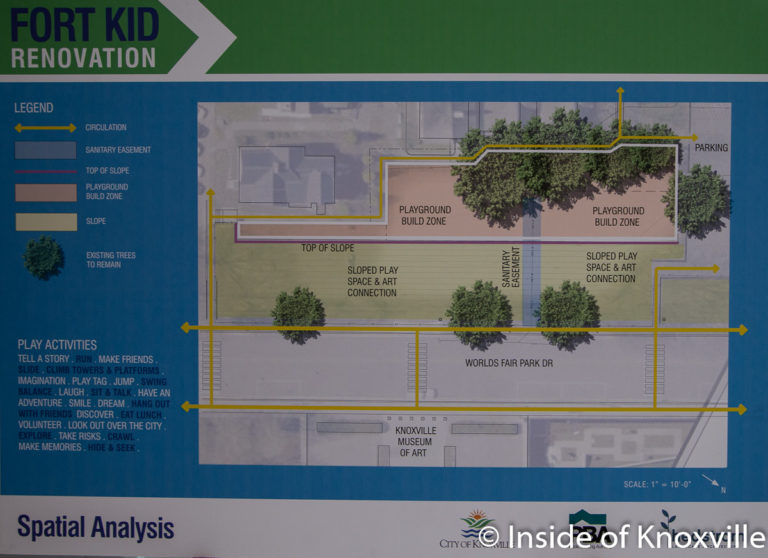 The first of the planned community input sessions regarding the design of the new version of Fort Kid was held at the Knoxville Museum of Art before what might come to pass as a large group in the current atmosphere. Charles Lomax, Community Empowerment Director for the City of Knoxville, led the meeting and started by noting the serious atmosphere in the world, the country, and the City as we begin to feel the impact of the COVID-19 virus. It was a day that included the announcement of suspension of in-person classes at the University of Tennessee and an early start for spring break at Knox County Schools. Lomax also noted that he played at Fort Kid as a child, so it has some special meaning to him.

Following that cue, David Butler, Executive Director of the Knoxville Museum of Art, welcomed the crowd and said the Museum is happy to be a neighbor to the small park and that it is, “nice at this moment to think of kids playing in the sunshine.” Thanks were given to the Boyd family and their donation to the project, as well as Beth Waters who shepherded the original project in 1991. She and her husband John sat at a table with former mayor Victor Ashe, and all would have more to say after the presentation.

The issues driving the current project were detailed, including a failing retaining wall comprised of rotten timbers. The soil is inadequate, being primarily red clay, which expands and contracts, causing problems for the wall as well as stressing the playground equipment. There is also a KUB easement running under the wall over which a new wall cannot, by current codes, be built.

The goals of both the gathering last night and the surveys being collected were given as “capturing the spirit of Fort Kid,” in the new design. As a part of that effort, the City is collecting memories of the park and is particularly interested in favorite uses of the various parts of the equipment. They also want the new construction to focus on “inclusive play,” and it must meet current guidelines for playgrounds.

The immediate timeline calls for holding a Fort Kid Birthday event on April 4, closing the park and beginning dismantling on April 6, and beginning slope work on April 20 with a target completion date of June 30 for the slope work. Survey collection will end March 31, and another public meeting will follow this summer. Design is expected to be complete by this fall, and construction complete for a Spring 2021 re-opening.

Other details discussed included the fact that the eight shade trees currently on the site will be preserved and that the fence around the structure is up for discussion as to its inclusion in the new configuration. The new base area for the structure will be about 6,000 square feet and will be more linear and less square-shaped. An art installation on the slope connecting the playground to the museum is also planned.

At the end of the brief presentation, as the crowd was about to be dismissed to the “vision boards,” an audience member asked if we could ask questions and was told that questions could be asked at the boards of those who had made presentations. The person replied that shouldn’t questions be asked as a group so everyone could hear what was asked and the answers given?

So began a brief exchange between Mrs. Waters who spoke up and, with support from her husband, pointed out that the 6,000 square feet is much smaller than the current layout, running about a quarter to a third of the current space. They asked if another, larger, location on the World’s Fair Park could be considered. They were told that it would not be considered, though about 1,000 square feet of the parking lot could possibly be converted to park space.

Victor Ashe said, “You can’t cut short the chance to ask questions. We are not having a public meeting.” And so the group portion of the meeting ended. 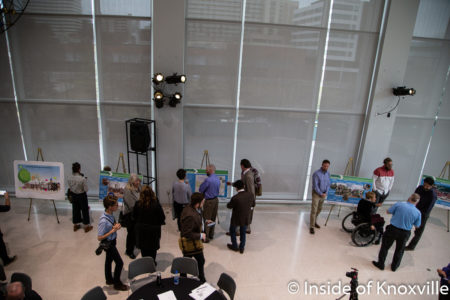 I spoke with Beth and John Waters afterward and she said she is “unhappy. If the design is not in place, why close it to destroy it?” “Three weeks from now we close it.” John added, “This is a demolition,” noting that the city does not use that word. He says the site is currently 1.79 acres according to the city’s website (this is correct) and that it would become one tenth of that size. Beth noted that she was at the playground recently when Mayor Kincannon toured and she counted fifty children playing in the park. John added that the original report from engineering only required rebuilding the retaining wall.

I spoke to Chip Barry, Deputy Chief of Operations for the City of Knoxville, who said it is necessary for the park to be smaller due to the addition of the required slope, which takes up space from the former playground. As to the timing, he said that a delay on this end of the schedule would precipitate a delay of the opening date next year.

You’ll find the city’s Fort Kid Page here. A link is included there to the survey.