Arlo, Caverns, Not Those Caverns, Somewhere Deep in Tennessee 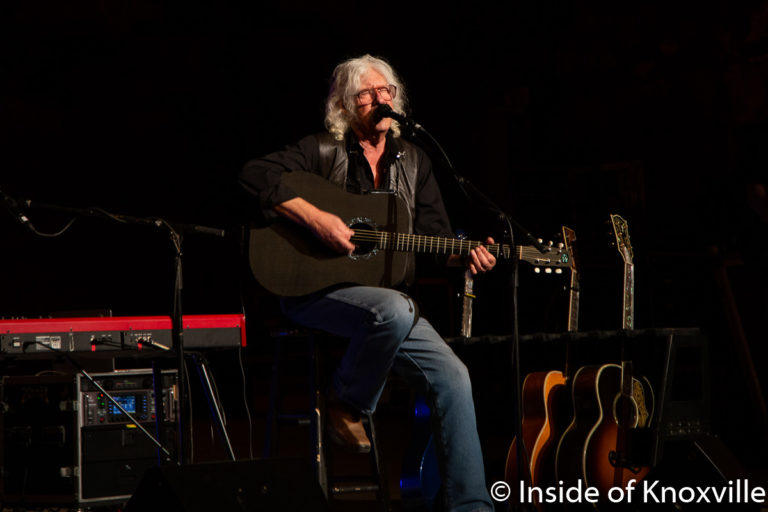 We drove out of Knoxville after watching the cute puppies prancing about in the streets that morning, adorned in their purple and gold finest beads and boas. The idea was, after a fun morning, to spend some time with Arlo Guthrie at Cumberland Caverns. Maybe you’ve been there for a concert. Bluegrass Underground was filmed there. I saw the Black Lillies there in October 2010. So, Cumberland Caverns it was.

Let me tell you about Cumberland Caverns. It’s about 130 miles toward the middle of the state. Head west from Knoxville on the Interstate, get off at some point. Take little roads, get nervous, twist and wind and follow tiny signs that promise there is really something more than wildlife ahead, and eventually you can pull into a small opening in the forest that serves as a car repository.

We arrived early. Show started at 7:00, doors at 6:00, arrival time: 5:45. We sat in the car and chatted. Noticed there weren’t as many cars as we’d expected. Noticed a school bus. And friends, on the side of the school bus were the words, “Boy Scouts of America.” We eventually walk inside. No hurry, being early and all.

I told the people behind the counter that we were here to see Arlo Guthrie. At Cumberland Caverns. Where I’d been before. They looked at us. We looked at them. We looked at all the Boy Scouts running about with their backpacks and sleeping bags. The boy scouts looked at us. We began to sweat, because something seemed amiss.

And friends, amiss it was. The woman behind the counter, said, “Kid, that ain’t happening here.” I said, “I’m sorry, Mrs. Ma’am, but I bought tickets. It said it was in the Cavern. I’ve been here before. Have you heard of the Black Lillies?” She said, “Kid. We don’t have music at Cumberland Caverns.” And I started explaining to her the tickets, the interwebs, Black Lillies and Arlo Guthrie, and the trip from the city, and she said, “Kid. They bought their own cave.”

And friends, I really couldn’t believe my ears that a perfectly good, acoustically pristine, absolute beauty of a cave, complete with a stage, sound and lights, concessions and restrooms wouldn’t be enough for even your pickiest, cave loving, concert promoting, musician playing outfit in the hills of who knows where Tennessee. I mean, I mean, who buys their own cave? But buy their own cave they did.

Hat in hand, I asked the lady, I said, “Mrs. Ma’am, where exactly did they buy a cave?” And she said, “Kid, it’s in Pelham.” Now friends I have successfully lived in the state of Tennessee and, specifically, the eastern end of said state for almost forty years and I have never heard a whisper about a place called Pelham. Apparently it is a place where people go to purchase their own personal cave. And a spot where Arlo Guthrie would now be performing in about forty-five minutes.

Well, I soon learned that Pelham is a small stop somewhere in Grundy County featuring 403 souls and one school. Started up in 1832, they’ve managed to add about 2.1 citizens a year ever since. They aren’t in a hurry. But they have a cave that sits about 37 miles and an hour and twenty minutes over small, windy, crooked, careening, cavorting, twisting, turning roads and small pig paths. We found the spot. We aren’t proud.

Parked in a dark meadow. It looked like a good place to leave a car. We didn’t see a cavern. I saw a young man carrying a flashlight and acting like he was pretty sure that meant something. I said, “Mr. Flashlight Man, where’s the cave?” He assured us there was indeed a cave, half a mile down a gravel road, over the hill and through the dark, and yes, Arlo Guthrie would be there when we arrived.

I said, “Mr. Flashlight Man, I have a camera. Is that ok?” Mr. Flashlight Man said, “Kid, we don’t like cameras around here. Is it a big camera?” I said, “Well, I’m not sure. I’ve seen bigger. I mean have you seen those cameras they shoot movies with? I once saw the Black Lillies in a cave back down the road and they were filming for tv and . . .” He stopped me right there and said, “Kid, let me see the camera.”

And I showed him the camera and he got on his walkie talkie, right there in the middle of the night, in the meadow near the cavern, and said, “We got us a po-ten-tial problem. Kid with a little camera wants to bring it up, 10-4.” Well we got the all-clear and, little camera in hand, climbed on a school bus and our friendly driver, Caleb, a timeless hippie with a cowboy hat with a peacock feather, hit the pedal and up the hill we climbed through the night slinging gravel on every poor soul we passed.

Checked in at the ticket station, walked on down the road toward a light up in the woods. Got to the entry point, held my camera in the air so they could wand us down and make sure we didn’t have guns or knives or small nuclear devices. And they were being sure. They didn’t want any nuclear explosives in their cavern. And we were judged to be clean of such weapons of mass destruction until they noticed the professional Canon 6-D with a 24-105 zoom lens.

And they looked at the camera. And I held it in the air starting to feel my arm burn. Sweat forming on my brow. Hands trembling in the dark. And the guy said, “Kid. How did that camera get up there in the air over your head?” And I said, “I cannot tell a lie, I put it up there.” And he said, “Kid, we don’t like big cameras like that around here.” And I said, but Mr. Wand Swinging, Ticket Taking Man, Mr. Flashlight Man said it was little.

And friends they let us in and we had a fabulous concert in Pelham, Tennessee, socially adhering in the moments before we learned that social distancing would be all the rage. Folk Uke opened and thrilled the audience with songs like, “I Gave a BJ to a DJ (and now I’m a radio star),” “Knock Me Up,” and “Don’t Bite Beyonce.” And we all sang along with the duo, Cathy Guthrie (Arlo’s kid) and Amy Nelson (Willie’s kid) until they gave way to Arlo.

Arlo spun stories, sang songs, played guitar and keyboards, talked about his dad, Woody, and his long time friend Pete Seeger. He sang “This Land is Your Land,” and told a different version of the story I’ve heard him tell before. He started the night with “The Times They Are-a Changin’,” which endeared him to our Dylan-loving hearts immediately. It was a lovely night catching one of the few wisps of the sixties still to be had in this hard world.

And I used my camera. I took twenty-seven eight-by-ten color glossy pictures with circles and arrows on the back of each one explaining what it was that was going on in the picture. I took pictures of the keyboard, the guitar, Arlo’s curls, and his daughter, Willie’s daughter, the cave and everything in it. With my little camera.

We grabbed a bus ride back down the hill and had a great time talking with the people in the bus about all sorts of fun and groovy things. Caleb had a new hat. The car was where we left it. We were glad. Only, outside of the fact that it was in a meadow down a gravel road from the spot you go to buy your own personal cave, we had no idea where in the universe our car resided at that moment.

Thankfully, a little GPS told us that Pelham, Tennessee is 163 miles from Knoxville and after a short meander on a pig path, it is Interstate all the way. We grabbed a bite of disgusting fast food which tasted like a feast at a king’s table at 11:30 and slid back into Knoxville at about 2:30 a.m., just a bit over twelve hours and 330 miles later.

It was a great day, highlighted by time with Urban Daughter. We laughed and chilled and rolled with the punches. It all worked out, and I’d recommend a more direct trip, but a trip none-the-less to the Cavern if you see a show listed there that you might like.

We didn’t know then, of course, that it would be one of the last times we’d feel comfortable being in a crowd for a while. Arlo didn’t realize it would be his last show for a while. He’s safely passing the time back in Florida. I’d encourage you to follow his Facebook Page. He’s a good soul and always sounded a note of hope. He’s also a very good photographer (small camera) and posts beautiful shots.

In case you have no idea why I wrote this piece the way I did, I’d encourage you to check out the video above. It’s the perfect antidote for a case of Corona Cabin Fever (not actual Corona fever – I’m not peddling fake cures). I hope you enjoy and I thank you for indulging me. We’ll get back to regular programming soon enough.