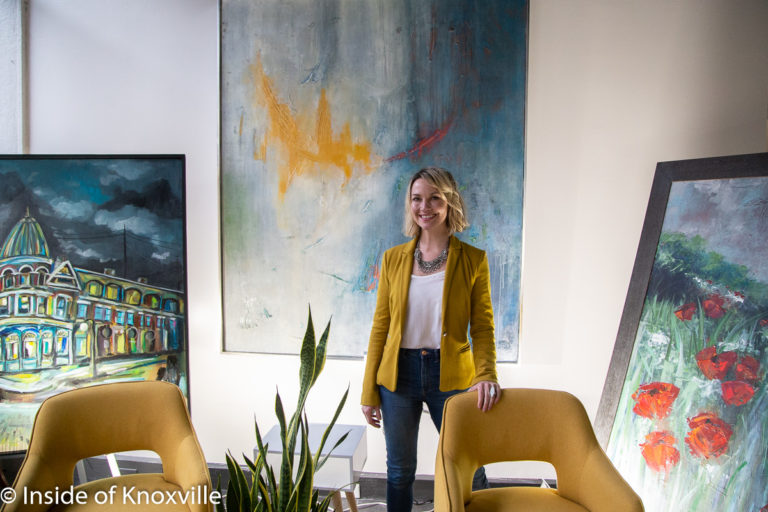 Lauren Lazarus recently opened the latest in a growing list of galleries in the Old City. Located at 108 East Jackson, it is adjacent to the gallery and studio recently opened by Mark Carson English. The two are friends and happy to be working together. If you’ve seen the mural of poppies in Strong Alley behind Market Square or the floating ornaments mural two years ago on the skating rink, you’ve seen some of her work, but there’s much more to explore.

Lauren was born in Nashville, and her family moved to Knoxville when she was three. Always artistic and “creating things,” she attended Bearden schools and enrolled at UT uncertain of her career path. After considering advertising, she went with broadcasting because she remembered enjoying being in front of a camera broadcasting the news at Bearden Middle School.

As she concluded her work at UT, she moved to New York City where she was an intern with the Daily Show with Jon Stewart. Her first paying job came on “Tough Crowd,” with Colin Quinn, where she was the audience coordinator. She says it was fun, and that job lasted for two years before the show was canceled. She then shifted to production work, remaining in New York City until 2005.

Returning to Knoxville, Lauren continued production work with Jupiter Entertainment and she also began exploring being in front of the camera as an actress. She landed several commercials and worked with local filmmakers. She worked with an agency in Atlanta for a time, commuting from Knoxville. She also worked with Knox Ivi in 2011, co-hosting “11 O’Clock Rock,” with Brent Thompson.

About four years ago, tired of chasing roles and waiting on casting directors, she began to shift her attention to her art. She liked that she could put as much of herself into it as she chose and she could see the results. She took a class at Jerry’s Artarama in alcohol inks and fell in love with the medium. She immediately “bought supplies and started cranking out pieces.” She had her first show on a First Friday in 2016 at pretentious glass where she’d been working part time. She sold some of her work and was hooked.

The first show included abstract floral works and alcohol inks, but Lauren’s repertoire expanded in subsequent years. Mark Carson English, whom she considers a mentor said, “You need to go bigger.” Inspired by the fact that Mark has made his living working as an artist, she started making larger pieces.

Lauren also had a meaningful conversation with a glass artist named Johnny Glass (that is his real name) who asked her where she was going with her art. She replied honestly that she had no idea. He said, “Listen, I blow glass and I sell the hell out of pumpkins.” He explained that while he has more creative expressions of his art, it’s the pumpkins that give him the income that allows him to do the other work.

He told her she needed to “find her pumpkin.” She says now that the pumpkin finds you and she recently wrote an article about it on her website. Her pumpkin? Pet portraits. It’s one of her most popular offerings, and you’ll find a portrait of her own feline inside the gallery. She paints them from photographs and can accommodate size requests.

Of the studio, Lauren says the idea came when she was sitting inside Bluhen Botanicals, having a beer with her friend Marcus Archer and her husband Johnny Miller when she noticed a “For Lease” sign on what is now her gallery space. As she looked across, she imagined a pet portrait in the window. She imagined welcoming people to the space and having conversations about art. She called the number and the wheels were in motion.

The Old City became her stomping grounds when she returned to Knoxville in 2005, and it makes having the studio there that much more meaningful. “It’s more than the physical space. It’s the Old City and its stories. I want to help make this a place for quality affordable art.” She’s got a wide range displayed and hopes to add more. She has work for as low as $50 for portraits of pop icons with quotes. She’s recently added more works portraying the Old City neighborhood. She also welcomes commissions.

You’ll also find two other artisans with work displayed in the shop. The frames around Lauren’s works are custom frames built by her husband, Johnny Miller, who operates Two Roads Frameworks. You’ll also see beautiful wood and metal coffee tables, end tables, and more throughout the studio that are for sale by Marcus Archer, who has a webpage coming soon. Here’s his Instagram.

Lauren currently has work at Oli Bea, but you’ll see the bulk of her work in the new gallery. She’s starting out with limited hours, but hopes to expand. Her current hours are 11:00 a.m. to 6:00 p.m. on Fridays and 10:00 a.m. to 2:00 p.m. on Saturdays. You’ll also see her working in the gallery some nights, and she says she’ll put the sign out on the sidewalk and be happy to welcome passersby. She’s also available by appointment and open until at least 8:00 p.m. on First Fridays (tonight!).