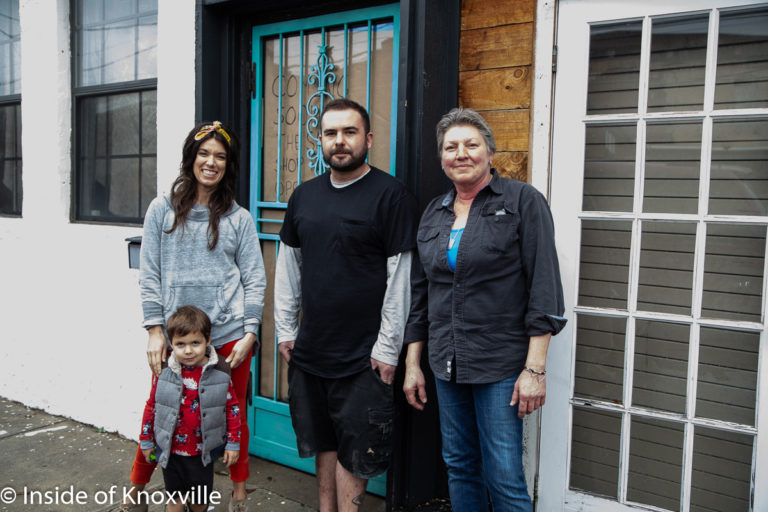 Out of the uncertainty of the recent withdrawal of Knox Heritage from their operation of the Salvage Shop, which they moved to 619 North Broadway in 2015, has come new ownership and a for-profit business with a similar mission in its place. The Salvage Shop Revival, is owned and operated by Julie Schwab and Colin Kronick. They are in the process of modifying and updating the approach of the business and plan to host a grand opening on January 25th. Both were involved with the business when it was operated by Knox Heritage.

Julie has been involved in antiques most of her life and has made her living for the last twenty years in the hotel industry. When an opening became available last year to work part time as the manager at the Salvage Shop, she took the position and began to learn the salvage end of the business. When Knox Heritage’s five-year lease ended in December and they declined to continue the enterprise, she and co-worker Colin Kronick decided to open the new business.

Colin, originally from south Florida, moved to Knoxville in 2012. His parents bought an older home here, and he bought one beside them. The extensive work needed on both of the houses was his introduction to restoration. After many hours of trial and error and lots of YouTube videos, his skills improved and he fell in love with the process of replacing vinyl windows with wooden ones. He began work with Knox Heritage as a volunteer and eventually started helping with salvaging architectural features from homes set to be demolished, or renovated without those features.

As co-owners of the new business, they plan changes from the old model, while retaining its preservation heart. The new business is for-profit, and they have expanded into areas such as window restoration for historic homes. They plan to increase the hours of the business from the 20 hours a week it was previously open. They also hope to more carefully curate the collection to only focus on mid-modern and older pieces, which they will collect locally and regionally.

They hope to connect to the community by offering classes and opportunities for apprenticeships. The two said they already have a very dedicated core of volunteers who are helping them to transition. Laura Cunningham, a former manager at the shop, and Nancy Kirt have been very involved, as well as Betsy Erickson, Cindy Kortebein, Bonnie West, and Annette Brun.

The focus of the business is to serve people who want to re-use, not necessarily re-purpose, the historical artifacts. They plan to develop and work with a network of artisans such as plasterers and wood-workers. They note that a number of builders and new home owners are looking for original historical pieces to add character and quality to their homes.

Plans call for highlighting the artists who also use the building. Artists, including Ashely Addair, have used the studios upstairs from the beginning. There are currently three spaces upstairs (one is currently available), and there are plans for two more upstairs and one downstairs. Ashley says she loves the space and the location. It gives her the opportunity to bring potential clients into her studio and offers flexibility. She has hosted events with fellow artist Michael Giles, who has also had a studio from the beginning, and says the collection of artists and others at the business feels like a family. They are joined by artist Kit Hoefer.

People familiar with the shop over the years will soon notice changes to the interior as the new owners renovate with period-appropriate touches for the 1800s building, making it a model for what they are trying to promote elsewhere. The front area will be transformed into exhibition space for artists, and the rear of the main floor, as well as the downstairs, will be stocked with the artifacts for sale. Downstairs will also serve as a work space.

Join the group for their grand opening January 25 and support them as they work to keep beautiful, functional, and historic pieces out of landfills. Follow them and give them a “like” on Facebook.