The Oak Room by Abridged Settles Into Happy Holler 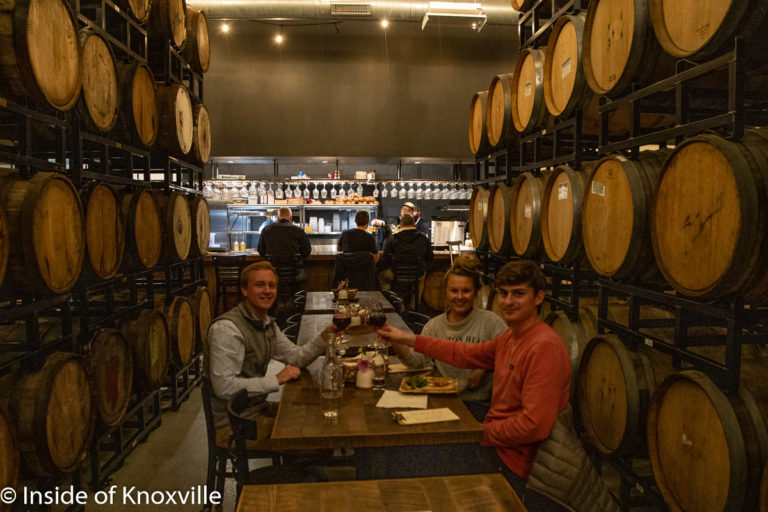 The beautiful Oak Room, presented by Abridged Beer Company, welcomes patrons into a room filled with oak barrels, each aging a different sour beer. Although not offering the full range of Abridged product available at their original brewpub at 100 Lockett Road, the collection presented here is curated to focus on sours. The Oak Room, at 109 Anderson Avenue, serves eight different barrel aged sours, two kettle sours, and two non-sour beers on tap. They also offer cider.

Abridged Beer Company, opened in August of 2017 by a team of partners, is headed by founder Jesse Bowers. The company has evolved to provide a wide range of beers, from sours to stouts, Belgians, light lagers, and more. They are also experimenting with a wide range of flavor profiles. Josh Hill is the head brewer, and Joey Trott, one of the co-founders, is head chef.

The Lockett Road location is known for its brisket burgers, which Joey is ready to pronounce the “best burgers in town.” The location also offers pot roast nachos, and Joey said people often come for the food, with an 85% order rate for food among patrons visiting the location.

The Oak Room has a smaller kitchen and offers a smaller, though tasty, menu focused on charcuterie, flatbreads, and sandwiches. Josh pointed out that the charcuterie board is enough for most couples. The charcuterie boards are produced by Henhoc (coming soon to the Old City) and include smoked chicken and salmon, liver pâté, and more. They also offer salads built with veggies from Three Rivers Market.

Josh started brewing in 2011 at Smokey Mountain Brewery and was head brewer at their Turkey Creek location from 2014 to 2016. He left to look for a position where he could exercise more creative control, became friends with the founders of Abridged, and became their first employee. He enjoys the collaborative nature of the company and the blending of flavors. With so many sours, he says they can make a wide range of taste profiles through combinations.

Joey has been working in the food industry for twenty years. He’s worked everything from quick service food to holding the sous chef positions at The Lodge at Buckberry Creek, Swag, and the Bistro at Biltmore. He and Jesse have been friends since childhood and both became interested in brewing as they got older.

Jesse came to Knoxville from Elizabethton to attend UT and stayed. Joey, also from Elizabethton, was back and forth between the two cities and had a catering business in Elizabethton. When Jesse decided he wanted to make food a central part of the program at the brewpub, he brought on Joey as a partner, and Joey moved to Knoxville permanently. When they opened the business on Lockett Road in an old six-bay auto garage, they expected to sell a hundred burgers a week. Now, particularly in the spring, 700 to 800 burgers a week is not unusual.

They are excited about the expansion to Happy Holler and North Knoxville. They wanted to be closer to downtown and, after considering locations in South Knoxville and other places, they settled on the building on Anderson Avenue as the perfect fit. They feel the area will continue growing and business will only get better. The idea for the decor and layout of the place came from the small event space they have at the other location, which is filled with barrels. People seem to love the way that feels.

The Oak Room has seating for seventy and, so far, their biggest hit is the Oak Room 40, which is a variety pour of eight five-ounce beers, providing a taste of the range offered by the brewery. They also have five to six different bottled sours available for carry out. The beer always has a story, and that story is often relayed visually through the labels, which are created by local pointillist artist Amanda Feener. You’ll find much of the original art for the labels framed and displayed on the walls of the Oak Room.