Chivo Taqueria Continues to be a Downtown Favorite 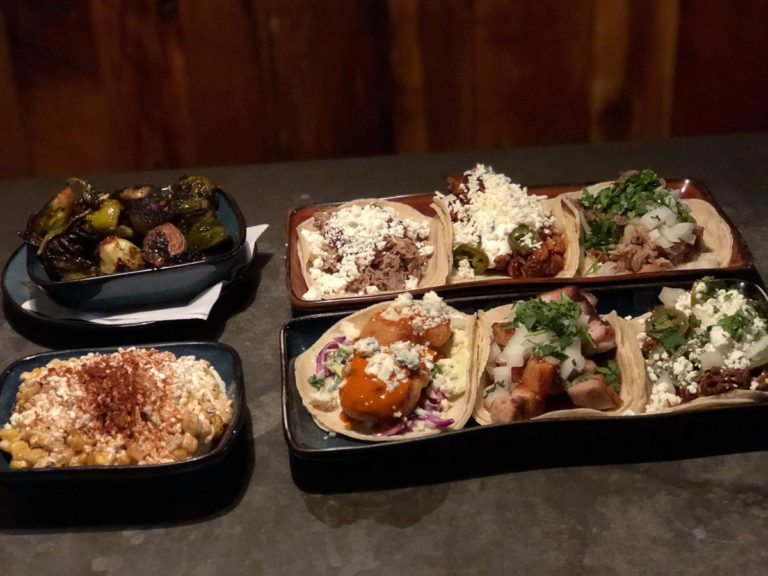 (Photos and article provided by AppalachianGastroventures for Inside of Knoxville. This is the sixth installment in their monthly series of restaurant reviews, allowing for further exploration of local restaurants after their opening. Check out their blog for many more dining experiences!)

The tequila at Chivo Taqueria is impossible to miss, and that’s by design.

Mexican folk art adorns the rustic walls of the South Gay Street restaurant and a golden bicycle hovers over the front door, but  bottle after bottle create a massive wall of distilled agave behind the bar, which boasts hundreds of varieties of the Mexican staple, from Don Julio to Dulce Vida, and seemingly everything in between.

Chivo opened in 2016, and they’ve been adding tequilas and tacos ever since. And while we certainly would recommend dipping into Chivo’s deep menu of spirits (tequilas as well as mescal and sotol highlight the bar menu, but the bar is fully stocked with other liquor as well), the food is no less of a calling card.

We might be slightly biased, as our first experience at Chivo came hours before we got engaged later in the evening. But we’ve returned several times since, driven in equal parts by nostalgia as the creative and affordable tacos that are as delicious as any in Knoxville (as well as the best roasted Brussels sprouts we’ve ever encountered, but we’ll get to that later).

Served on made-fresh corn tortillas akin to what you’d find on a street cart in Mexico, none of the tacos tops $4.50, making it easy and affordable to mix and match. There were 11 different selections at our most recent visit this month encompassing an assortment of different proteins: barbacoa brisket, ground beef, beer-battered cod and shrimp, grilled steak, chorizo, braised pork, chicken thighs, lamb, and duck. There’s even a vegetarian option, known as the “Guacward,” with beer-battered avocado, slaw, queso fresco, pico de gallo, and aioli.

Each time we’ve been there we’ve tried a different combination, but we almost always return to the “Clusterduck.” Simple in its formation, roasted duck is perfectly paired with a black cherry reduction and goat cheese, making for a savory, sweet, and tart bite.

Since we’re suckers for goat cheese, the “Limp Brisket” is another top choice, spinning a traditional barbacoa-style brisket, onion, jalapeno and cilantro taco with goat cheese

The “Gangnam Style” is also a favorite, featuring crispy pork belly, onion, cilantro, and a sweet Korean barbeque sauce that lends itself perfectly to a taco—and is a perfect representative for Asian-Mexican fusion cuisine.

Not to be outdone on the fusion front, the “Mr. Panos” channels Greek faire with a tzatziki and feta cheese adorning braised lamb, and the “Big Shrimpin’ ” zings Buffalo with a zesty sauce smothering beer-battered shrimp and topped with blue cheese crumbles and slaw.

The quesadillas also shouldn’t be ignored, and coming in nearly as thick as a savory pie, it’s impossible to do so. For the chicken version, Chivo doesn’t skimp on the Adobo roasted chicken, soft white Chihuahua cheese, black beans, roasted corn, or jalapenos, delivering nearly a full meal in one quesadilla.

Crisp and flavorful churros dipped in chocolate make for a great dessert that isn’t overly filling, as does the tequila lime pie.

The hidden gem, however, on a menu full of creatively named tacos and tequilas resides in the side dishes. The Mexican street corn is an authentic off-the-cob approximation of its namesake, with chile mayo, queso fresco, cilantro, and ancho chile, garnishing the unique dish.

With its bitterness gone, the vegetable’s earthy flavor shines, and paired with the honey, there’s no better way to accompany a meal of tacos and quesadillas—that is, unless you want to do as we did, adding some tequila, as well.