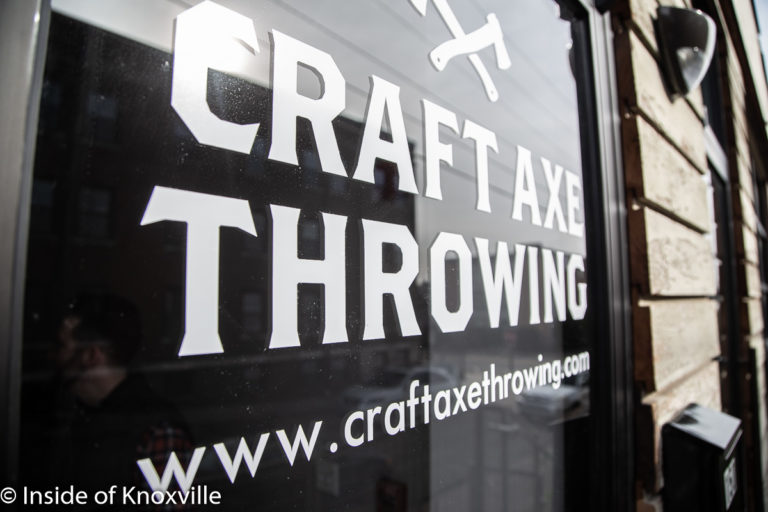 For those of you who clamor for more entertainment options in the city, this should fit the bill: drink and throw axes! What could possibly go wrong? As it turns out, it’s very safe and is an increasingly popular form of entertainment across the country. Craft Axe Throwing is opening Tuesday, December 31, 2019, at 119 West Fifth Avenue, giving participants a real edge in their New Year’s Eve celebrations and a new entertainment option for downtown residents and visitors.

The concept is very simple, as explained to me by Trent Larkins, Director of Marketing for the company. There are two sizes of axes. One is more like a hatchet and the other is a two-handed, larger instrument. Similar to bowling lanes, a person or group of friends reserves a “lane” or throwing space. There’s a score card and a target with increasing points assigned for hitting closer to the bull’s eye. Each lane is safely separated by chain-link fencing, and the floor is padded to prevent bounce-back accidents.

This will be the sixth axe throwing location for the company, which started in Greenville, South Carolina, and also operates escape rooms. The three founding partners wanted something that would be fun and different and family-friendly. They noticed axe throwing was gaining in popularity in Canada and the northern U.S. but hadn’t made it to the southern states. They opened their first location, and it was an instant hit and has led to subsequent openings.

The first location was in an old mill on the outskirts of Greenville, which is the type of location they searched for in Knoxville. They were looking for areas that could accommodate another activity, and the particular activity in question carries with it certain requirements, like high ceilings, lots of space, and a willing building owner.

They had hoped to open earlier — word spread about them last spring — but they ran into the inevitable slowdowns. They had to do major electrical work in the space and, as it is the first location for axe throwing in the state, permits were slow and complicated and just came through in the last few weeks.

Individuals and parties of up to eight people are welcome to walk-in, though reservations might be best. Online reservations are coming soon. Larger parties will need to talk with an event specialist. If the group is big enough, they may also make special reservations outside regular business hours.

Food service is currently limited to light, bar-type foods, though more options may be available later. Currently they are offering canned beers from Yee-Haw and Sierra Nevada and some others. They also have seltzer and cider.

After Tuesday’s Grand Opening, the business will be open Wednesday through Sunday and will be closed on Mondays and Tuesdays. Hours are 4:00 p.m. to 9:00 p.m. Wednesday and Thursday, noon to 11:00 p.m. Friday and Saturday, and Sunday from 2:00 p.m. to 8:00 p.m. Check out their website and give them a “like” on their Facebook Page where you’ll find the latest updates.