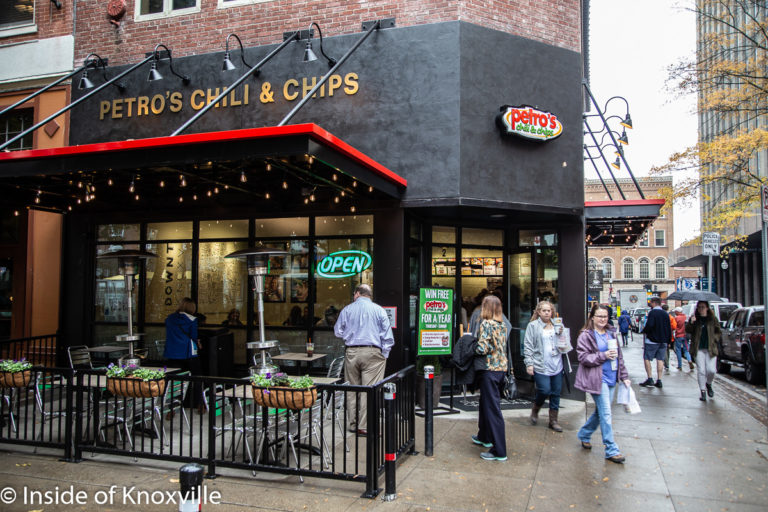 Petro’s Chili & Chips opened in its new Market Square location last Thursday to a large response. Downtown workers have told me since the announcement that Petro’s was coming to 2 Market Square that they were happy to have a fast, counter-service restaurant to patronize during lunch and they have come out in such great numbers that it has strained the restaurant’s capacity to meet demand. I spoke to Alex Widmer, son of co-founder (with his brothers) Dale Widmer who called it a “good problem to have.”

He said the company (and his family) is excited to return to the downtown area. It’s a point that many people do not realize: The original Petro’s were served at the 1982 World’s Fair. Introduced here by Spokane natives Joe and Carol Schoentrup, the food next popped up at the 1984 Louisiana World Expo where it was, once more, a hit.

In 1985, brothers Dale, Keith, and Randy Widmer developed a restaurant around the concept, moved service from a Fritos bag to a bowl, and opened the first location in West Town Mall. As Petro’s and the Hint-of-Orange iced tea became popular, more mall locations followed, and in the 1990s the first drive-thru location opened on Kingston Pike. In the 2000s Petro’s became a staple, first at Neyland Stadium and later at stadiums and arenas across the southeast.

Alex said that he saw some conversation on social media with the announcement of the new location that indicated many people did not know that Petro’s is a local business. It has grown into a chain, but it’s a chain for Knoxville to love because the money flows from locations across the region right back into Knoxville. It’s truly a major Knoxville success story.

They have taken the prime space at 2 Market Square previously occupied by the I Love Juice Bar (and Rococo/Knoxville Graphic House and Reruns before that). “We’ve had our eye on Market Square for years and were very excited when this space became available. Being 500 yards away from where it all began for us is special, and we’re thrilled to be part of the vibrant downtown community,” said Petro’s President Dale Widmer. “We look forward to adding our special flair to Market Square.”

The new location, designed by R2R Studio, LLC and Z Creative Group and remodeled by Tillman Companies, LLC, is the fourteenth location for the restaurant and it prominently features a mural by my friend, Knoxville artist Paris Woodhull, whose maps of downtown (available at Rala) have become a symbol of downtown’s funky resurgence.

Creative and Marketing Manager Kimberly Widmer said, “The downtown area is teeming with creativity and talent, and we are excited to showcase local artists in our space while tapping into all of the creativity found throughout our city. Highlighting Knoxville-based talent in our new space is one of the elements we are looking forward to most at Petro’s Market Square.” Alex Widmer added, “We didn’t want to simply bring our business to downtown, we wanted to be a part of the community.”

So if you want some inexpensive, quick comfort food with a Knoxville twist, make sure to stop in. (Also stop in to check out the great mural by Paris.) You’ll find them on Facebook, their website and Instagram.