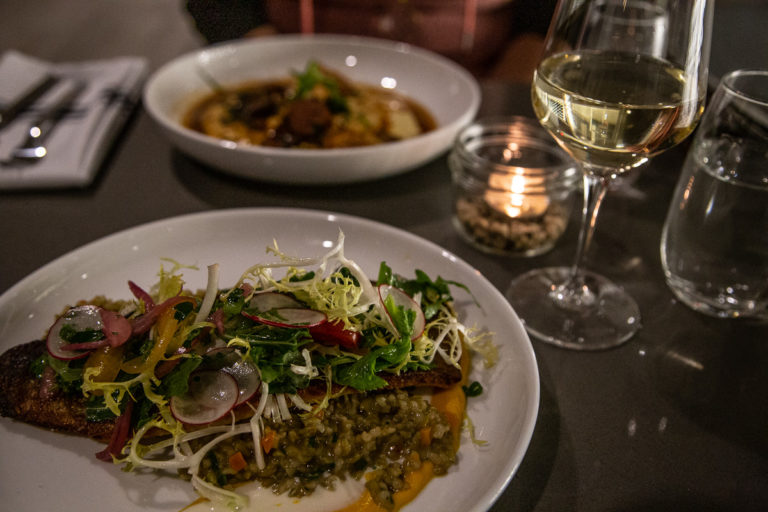 It’s the best of Knoxville stories. The kind of arc that can’t really happen, but does happen because, well, Knoxville. About twenty years ago in a high school typing class, freshman Alpesh Patel and junior Matt Gallaher could never have imagined that their futures would merge in such a major way. To thicken the plot, Alpesh was next-door-neighbor to David Rudder.

Fast forward to this week. Chef Matt Gallaher and financial partner David Rudder open the updated version of the Knox Mason restaurant inside Alpesh Patel’s beautiful new Embassy Suites on downtown Knoxville’s grandest street. Only in Knoxville. Alpesh now heads his family’s Kana Hotel Group with sixty-five properties, including their crown jewel Embassy Suites opening this Thursday, while Matt Gallaher has become one of the region’s most celebrated chefs in a golden era for the culinary arts.

Fans of the old Knox Mason will not be disappointed in the new restaurant. Matt describes the initial menu as a “greatest hits” from the first six years of the restaurant. This is also a great opportunity for new fans to hop on the bus. With a greatly expanded kitchen and about twice the seating capacity (about 100), there is more space and a larger menu. Knox Mason is set to expand the restaurant’s following.

The space itself is worth a visit, with beautiful views of the Embassy Suites lobby and its stunning waterfall of lights. With glass in every direction, the lights reflect throughout the restaurant. With understated decor and muted colors, the emphasis is on the food. The balcony seating, the first second-level seating on Gay Street, offers eighteen seats overlooking Knoxville’s most celebrated street.

There will be some additions to the new menu. Matt recalls, for example, discovering bamboo shoots at the Market Square Farmers’ Market and immediately changing the menu to include the surprise ingredient. A bigger restaurant brings a bit less flexibility, meaning the menu will be more set, but he’ll include specials.

Knox Mason will continue to source locally and the menu will change seasonally. Matt noted that he will be buying more than ever from local farmers, but the percentage of local produce may drop simply because of the volume of food the new restaurant will have to prepare. Initially staffing includes over thirty people for front and back of house.

Urban Woman and I were delighted to be invited to enjoy a soft opening last night to experience the new menu and setting. Given the recent narrative in our personal life, it was wonderful to be surrounded by the friends and neighbors we saw there, as well as to enjoy a great meal in a beautiful new venue.

We started by sharing the Crayfish and Cornmeal Fritter from the expanded appetizer (snacks) menu. They were so good we debated the etiquette of wiping the sauce from the empty bowl with our fingers (cooler heads prevailed). Urban Woman chose the shrimp and grits and I went with the crispy trout for our main course. We were both delighted with our choices.

The shrimp and grits were among the best we’ve ever had, and the trout was so good I would not have traded it for anything else on the menu We shared generously. The trout, covered in local veggies, is like getting a side and a salad wrapped into the main course. I also enjoyed a delicious sauvignon blanc from the short but well curated wine list.

We were both full at that point so, of course, we had coffee and dessert. She had the banana pudding while I went with the chocolate pudding with pecans and whipped cream. We were delighted with our choices.

The new Knox Mason is a great addition to Knoxville’s increasingly diverse and complex culinary scene, offering an old favorite that is better than ever. The restaurant is holding a series of soft openings to train staff and plans a full opening Thursday of this week. Initial hours will be from 5:00 p.m. to 10:00 p.m. seven days a week. Lunch and weekend brunch may be offered in the future. Initially, service will be first-come, first-served, but reservations will be accepted when systems allow.