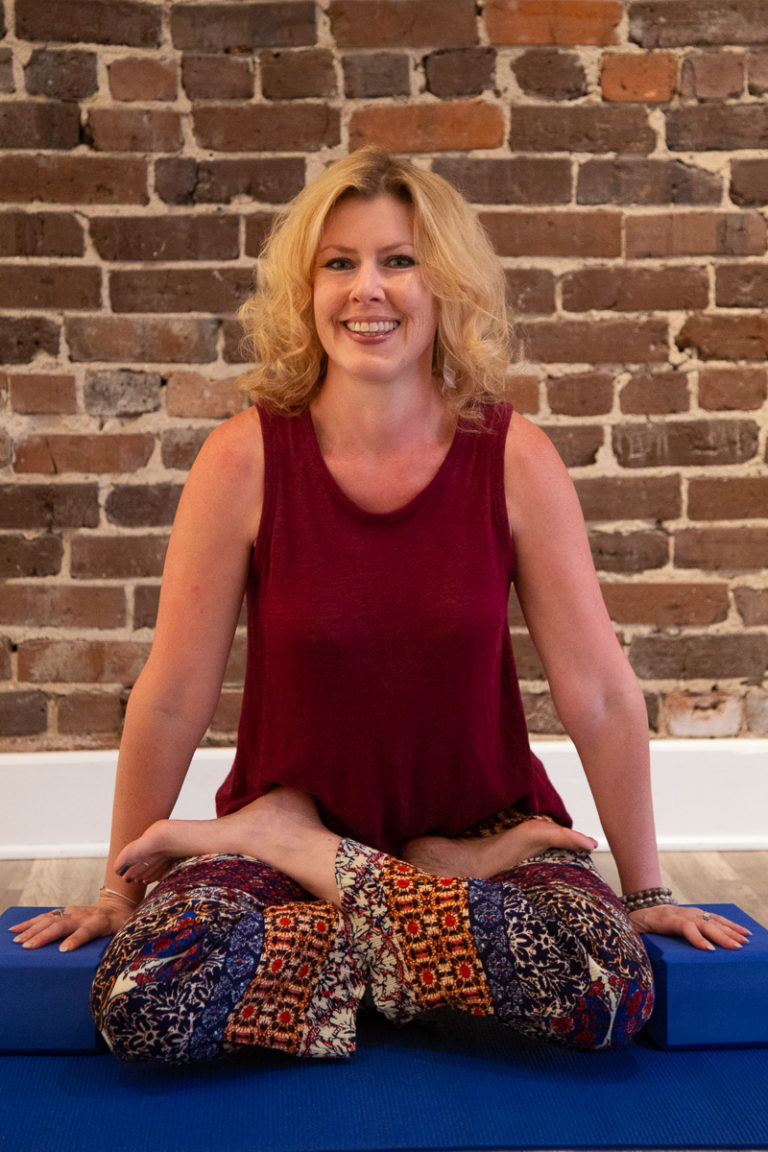 Mary June Thompson became downtown Knoxville’s newest small business owner yesterday with the opening of Gay Street Yoga at 317 N. Gay Street, across from Vienna Coffee and Regas Square Lofts. It may represent the beginning of a number of new businesses to spring up in the area.

Mary June is originally from Sevierville where her father worked for the postal service and her mother was a homemaker. She moved to Knoxville to attend UT and never left. She earned a double major in Political Science and Business and apprenticed to an appraiser after college. She worked as an appraiser until the housing market crashed and the business became much more difficult. She managed real estate rentals full time and still maintains an interest in that area but found herself drawn to yoga.

It started, she said, in 2007. Her mother had ovarian cancer, and Mary June read an article that said yoga was good for stress. As she started practicing, she found a sense of peace and she never looked back. As the years passed and she felt the inner peace and calm yoga can deliver, she began wanting to share it with others. This past May she finished her 200-hour training program and is working toward her 500-hour level certification.

She sought her first training at the Unity Yoga and Wellness Center (since closed). She said their focus on inclusiveness of all people and all body types spoke to her, as well as their focus on sensitivity to trauma. After completing the program, she taught (and continues to teach) at Breezeway Yoga Studio in Bearden, as well as leading classes at Kybra Athletics.

She says yoga fits her lifestyle and other interests. She enjoys healthy cooking and used to write a food column. She and her husband, Jason Thompson, known locally for playing the massive saxophone with Frog and Toad’s Dixie Quartet, have lived in Fourth and Gill for nearly ten years and enjoy spending their time in and around downtown.

She’d harbored a dream of owning a studio but never imagined doing so this soon. Content to be teaching classes around town, she noticed the for lease sign in the window at 317 N. Gay Street and thought it looked like a nice place for a yoga studio. The next day, Jason came home and told her he’d just seen a great place for a yoga studio. Realizing it was the same place she’d seen the day before, she decided the coincidence must mean she should explore the possibility.

When she entered the space, she said it had the “perfect feel for yoga,” with its high ceilings, exposed brick, great natural light, and quiet interior. She began thinking of every reason not to make the move, but every objection had an affirmative answer. “It felt like I was supposed to do it.”

Mary June will teach at the studio and it will be available for other teachers to use as well. She has planned classes for a full range of yoga styles and encourages other teachers in the studio to focus on what they do best. From beginners to the most experienced yogis, there should be something for everyone. If you are interested in teaching some classes or have questions, you can contact her at gaystreetyoga@outlook.com.

One interesting twist she mentioned was the possibility of working with the entire staff from one organization in a private class. She’s done so for a while with the staff from Saint Tattoo. Yoga, she said, is very helpful to people who work in unnatural positions (like leaning over someone to apply tattoos), and the group has had a lot of fun while improving their flexibility.

Mary June also wants to reach out to people who might not normally try yoga. One way she’ll do that is by offering all classes as drop-in for $15. There are no big packages or long-term contracts. She’ll also offer a couple of donation classes (pay what you can), including her Yoga for Cancer class at 9:30 on Thursday mornings. The class is offered for people recently diagnosed, in treatment, or in remission. Beginning in November, she’ll offer a donation class in vinyasa yoga on Monday evenings, which she says would work for all experience levels.

She plans to expand her offerings to workshops and special classes, such as an Introduction to Yoga, which is coming in January. For now, you can find her full schedule on the Gay Street Yoga Facebook Page (and give it a “like” when you visit), and she plans to have a a website soon. You can also join her in the studio for November First Friday and meet teachers and have any questions answered.