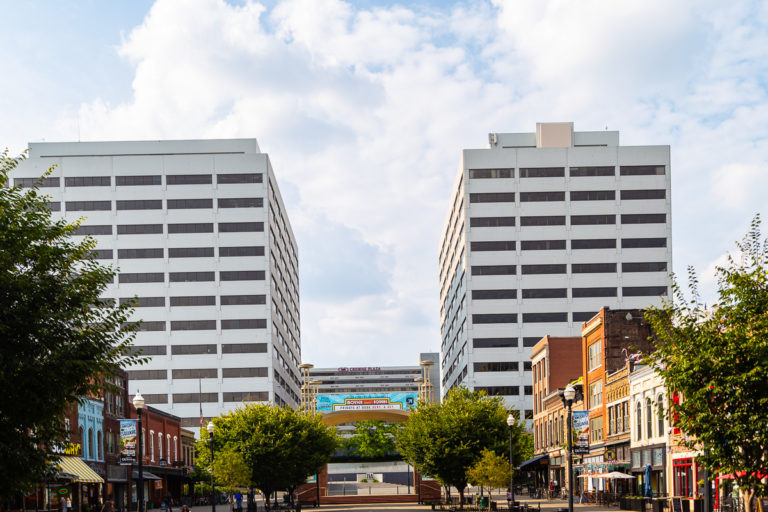 An agreement in principle has been reached between Knox County and TVA to have the school system offices moved to TVA’s east tower. The deal also involves Summer Place and was explained yesterday to a joint meeting of the school board and county commission. The commission must give final approval before the contract can be executed. The hope is to have that done within 45 days.

The effort to move the Knox County Schools administrative offices from the Andrew Johnson Building began with the previous administration. A Request for Proposals resulted in a contract with BNA Associates to purchase the building for $6,000,000. They agreed to spend $43 million to convert the building to a combination of hotel rooms, residences and commercial space.

The subsequent two years have seen the school system scouring the county, looking at properties they owned, properties to purchase or lease or properties where they might place new construction. They considered a dozen or so spots and found little that would suit their purposes. They considered vacant big box stores and spaces within Knoxville Center Mall.

In the end, they decided that the vacant east tower of the TVA buildings would work best. In addition to leasing the entire tower for fifteen years, with the possibility of extensions for another twenty-five, they would also purchase Summer Place and its parking garage just across Walnut Street from the towers. The purchase price for Summer Place would be $1.6 million and the rate for leasing the tower would reportedly be less than the current downtown office rate of $15 to $18 per square foot.

County officials reported that the tower is in excellent condition and that TVA has spent $10 million to upgrade each of the buildings. According to their report, little would need to be done to get the building ready for occupancy. It would need paint and carpet. They also noted the favorable interest rates currently available for the expense involved in the project.

Moving all the component parts of entities occupying the Andrew Johnson Building would only fill Summer Place and about half the dozen stories of the east tower. The other six stories could be used to bring other groups inside the building from locations like Knox Central in the old Sears Building on Central Street. It was noted that developers have expressed interest in purchasing that building. Other buildings owned by Knox County might also be able to be sold.

The tower includes about 212,000 square feet and another option for the unused 106,000 square feet would be to sub-lease the space, that would, at least partially, offset Knox County School’s cost for leasing the building. Additionally, Summer Place has a tenant that would remain in a portion of the building, providing income to they system. It also has a large parking garage which would generate revenue. The deal also includes the small parking lot on Gay Street beside the Knoxville Visitor Center.

In terms of taxpayer money, the eventual return of the Andrew Johnson to the tax roles would be a cash-positive development. As federal property, the TVA towers are not on the tax roles, so there is no loss there. The potential ripple effect on other county-owned properties could also be beneficial as they return to taxable status.

The contract is not a certainty. Some county commissioners seem to be skeptical of the idea and seemed to prefer keeping the offices where they are. Superintendent of Schools Bob Thomas was present and appeared to suggest displeasure with the process which has been driven by the County and not by the school system. Russ Oaks, Chief Operating Officer for Knox County Schools also expressed frustration at being excluded from conversations.

The plan, if approved would not be implemented immediately. It would likely be next summer before the first employees move into the towers and they would be moved in phases. Renovations on the Andrew Johnson Building would likely not start until sometime in 2021 at the earliest.