Former Bowery and NV Nightclub Buildings to be Restored 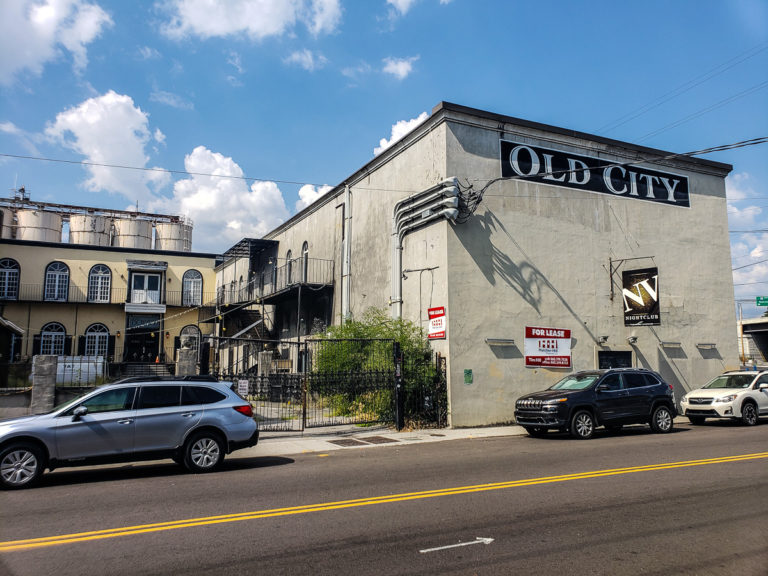 Two buildings at 125 East Jackson Avenue will be renovated and given a new use in a plan approved yesterday by the Downtown Design Review Board. Forming the east and south side of the courtyard across the street from Barley’s, the two buildings, along with the courtyard will be dramatically improved beginning within the next few weeks.

The buildings are owned by Tim Hill and the architectural designs have been developed by R2R Studio. The buildings, most recently housing NV and The Bowery, previously hosted multiple iterations of bars and clubs. Notable among them was Blue Cats which attracted some big-name artists to the Old City around the turn of the century.

Tim Hill tells me the address also hosted downtown’s only strip club in modern times (in the late 1980s) and he says it lasted an hour before it was closed. Further back in history the buildings were home to toy manufacturers. He says there were two or three different companies through the years making small toys one might find at carnivals.

Purchased two years ago, each of the levels of the buildings include about 4500 square feet on each floor. The upper floors will be built out as office space, though the spaces could easily be converted to other use if, for example, the tenants on the bottom floor wanted the space. The top floors of the two buildings will be joined and will share common bathrooms which will be added.

Some of the most  obvious changes will be on the external walls and the courtyard. The external walls will be repaired and painted. The original windows will be restored where they have been bricked over and will be replaced with better windows all around. The sheer wall currently facing the street will have numerous windows top and bottom, and will provide entrances both to the front restaurant and to the stairs that lead to the offices in that building.

The courtyard will see major changes and will be one of the most attractive features of the property. The front gate will be replaced with a nicer gate that will be moved back slightly from the sidewalk in order to allow for landscaping. The small out-building to the left as you look from the street will be removed. The balconies on each of the buildings will be removed and replaced with more visually appealing versions.

The courtyard itself has a significant slope and the change in elevation will be used to make a series of terraces. The first level, or “Entrance Garden,” closest to the street is about street-level and will include a water feature and landscaping designed by Hedstrom. About four feet up, the Middle Terrace will feature an outdoor bar and seating.

A slight step down to the right will be the Lower Terrace featuring outdoor seating for the restaurant to the right and a fire pit. A step up, past a large landscape feature, to about six feet above street level is the Upper Terrace, which will feature tables for the rear restaurant and an iron railing separating it from the other terraces.

The project will next proceed through permitting, and Mr. Hill expects demolition and construction to start within the next few weeks, with a completion date sometime next summer or early fall.