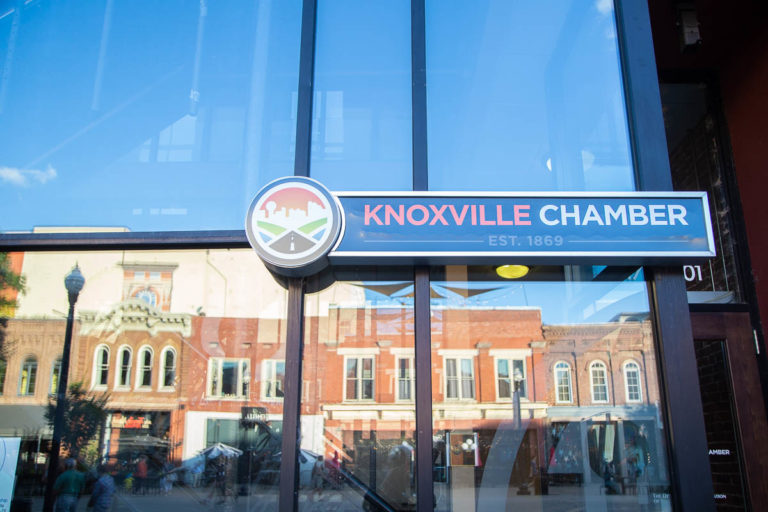 What does a Chamber of Commerce do? The answer apparently varies from one city or town to another. The needs vary between areas as do the approaches taken by the organization. The stated mission of our local Chamber of Commerce is, “to drive regional economic prosperity by providing progressive programs and sustainable partnerships. We aim to expand existing business, recruit new companies to the area, and lay the foundation to long-lasting achievements.”

Some of that is clear, while other parts are open to considerable interpretation. Mike Odom recently became the CEO of the organization, replacing Mike Edwards, a virtual institution, who had been in the position for seventeen years. It will be  Odom’s task to help shape how that mission translates into action over the coming years as the Chamber continues to work with Knoxville’s business community.

Only on the job for about ten weeks, Odom said he’s listening more than talking at this stage. He says he didn’t enter the position with a pre-determined vision, but rather wanted to get to know the people of Knoxville and to understand what makes business work here and what makes business more difficult. Whatever the goals he establishes along with his team and the business community, he said the focus is clear, “Meaningful measurable results is what we have to focus on.”

As he has eased into the position, he says he’s felt very welcomed and says Mike Edwards has been very helpful. He arrived in Knoxville from Round Rock, Texas where he was CEO of the Chamber there, but he’s experienced a range of organizations in his career. His personal journey has taken him in directions he could not have anticipated.

His father was in the FBI and, after being stationed in Long Beach, California, his second assignment was to Los Angeles, where Mike was born. When he was five-years-old, the family was transferred to just outside Philadelphia, Pennsylvania. Both of his parents were from Louisiana and his father eventually transferred to Lafayette. The family settled into nearby Crowley, Louisiana, where they lived until Mike left for college.

Mike initially attended the University of Southwestern Louisiana, which was later re-named The University of Louisiana at Lafayette. After two years he transferred to L.S.U. where he obtained a bachelor’s degree in general studies. During college he bartended and waited tables, settling into a job with Ruby Tuesday. After college they offered him jobs in Tampa or Lake Charles, but his dad had retired from the FBI and started working for casinos, which led to Mike taking a job in the marketing department at a casino in Tunica, Mississippi.

He worked in the industry in Mississippi and Louisiana for ten years, eventually landing back in Baton Rouge. Mike and his wife wanted to start a family, but he didn’t feel the schedule required by the casino industry would be conducive to being a part of his children’s lives. The Baton Rouge Chamber of Commerce, which is very similar in size to Knoxville’s, had an opening in marketing and he began working for them in 2006, remaining there for more than six years.

It was a formative experience for him. They’d just hired a new CEO with whom he’d attended college at LSU. The CEO emphasized a regional approach to the chamber. Mike describes it as “aggressive, dynamic economic development” with a focus on “entrepreneurship and public education.” He was able to experience the chamber, first from the perspective of a member of the casino industry, and then from the inside. He saw “how much they helped businesses succeed. There were so many people who worked hard for the right reasons.”

Mike eventually became Director of Marketing for the Baton Rouge Chamber before leaving to work for the Louisiana Chamber of Commerce where he remained for two years before taking the position in Round Rock, Texas, a suburb of Austin, and home to the corporate headquarters for Dell Computers.

Emphasizing that community needs are very different, Mike sees their goals as similar: to drive regional business growth. He pointed out that, during his tenure in Baton Rouge, the city was experiencing similar growth similar to that happening in Knoxville today. He said they focused on “good economic growth.” He has asked businesses two simple questions, “What keeps you up at night?” and “What do you need to be successful?”

In Round Rock, the Chamber focused on “controlling growth and not having it control us.” They worked with regulatory and health care systems and on building a support system for entrepreneurs. They emphasized talent development through the work force, public schools and higher education. Mike noted those who have given up looking for work because of physical limitations or other reasons are not counted in unemployment numbers and he wants to bring them into jobs they can do, and educate those currently in lower-paying jobs so they can advance their skills and earning power. He said we need to “make sure that educators are providing soft and hard skills for the needs of tomorrow.”

On the decision to move from Round Rock to Knoxville, Mike said he and his wife started talking two years ago about the possibility of looking for a place with a wider range of needs — Round Rock is very affluent — where they might be able to make an impact in more directions. They started looking at cities that met their basic requirements: a place to do the work they wanted, a university and a place they would be happy to finish raising their son. The family is now settled and very happy. “Life is good.”

The Knoxville Chamber of Commerce mentors small businesses, supports professionals, helps established businesses with recruitment and expansion and encourages growth across the region. Many of these services are available to any business or professional, but membership provides additional opportunities in marketing, networking and building beneficial relationships. You’ll find their extensive website here and membership information here.