The City is Alive With Urban Music 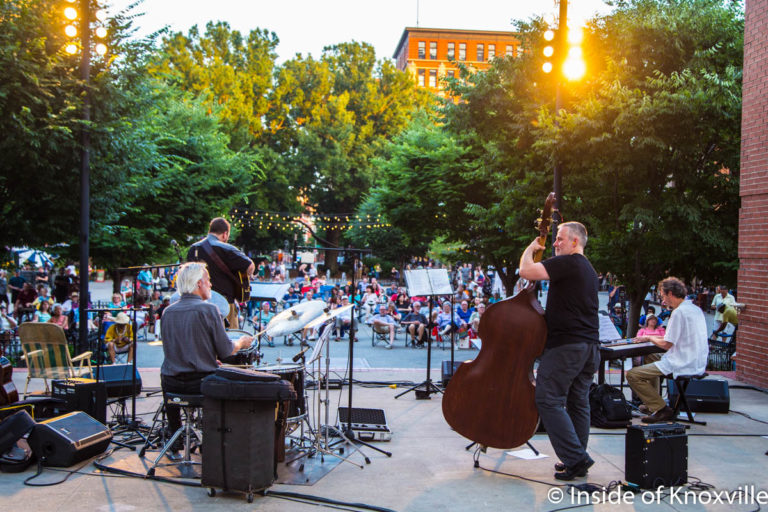 What is urban music? Consider the connections you make with various kinds of music. Country and bluegrass music make me think of rural hinterlands. I attached sixties folk and folk rock to cities like New York, San Francisco and Los Angeles. Rap or Hip Hop is clearly urban, but before that there was an urban music and it was jazz.

Think  of jazz and think of New Orleans, Memphis, St. Louis and coastal cities like New York, Charleston and Savannah. I grew up in Mobile, Alabama, less than three hours around the coast from New Orleans and jazz was a thing. Now, think of rural jazz and I come up empty. It’s urban.

I’m not well versed in jazz. I’m not so good at identifying specific artists or songs beyond the most legendary. That said, my car radio is tuned into WUOT if I’m driving in the evening so I can listen to Improvisations. Particularly since my recent move across downtown, it’s been what I’ve played at home. I love going out for a walk after dark in the city with jazz playing in the headphones.

Knoxville in some respects is an unlikely place to find jazz. We are on a river, but it never saw much in the way of riverboat travel that was often associated with jazz. The surrounding area is full of rural folk, mountain music, bluegrass and country music. Still Jack Neely points out we do have some history with the genre. You can here him talk about it here.

In modern times, no doubt, it’s the impact of the University of Tennessee’s jazz program that has Knoxville hopping to a different beat than many of our nearby neighbors. The steady stream of graduates from that program gives us a ready supply for the various jazz combos that play around town. It also helps fuel the Knoxville Jazz Orchestra which, in turn, also pumps jazz performances of their own, as well as a number of spinoff groups and artists.

I don’t generally engage misinformation on social media platforms, but when it’s about downtown Knoxville, I sometimes can’t help myself. That was the case about a year ago when a person declared there was no jazz to be found in the city. I shot back some of what was going on at the time. And it was a lot. Now there is so much jazz floating around it’s almost hard to believe.

As I look around my own 10 Day Planner and at various websites for downtown businesses, it appears to me there is live jazz available every single day of the week in downtown Knoxville with the exception of Mondays. Pretty amazing, isn’t it? Consider this: On three days each week, you have a choice of jazz at two different venues. On Sundays, you can currently find jazz at four different locations!

Tuesday nights are made for Jazz on the Square. Wednesday nights Frog and Toad plays at the Old City Wine Bar. Wednesday night is also the night that jazz starts each week at the Bistro at the Bijou which has to be considered the bedrock of jazz venues in the current era. They’ve been programming live jazz for years and currently feature jazz artists Wednesday through Sunday nights.

The Double S Wine Bar on the 100 block of Gay Street has jazz with your wine every Thursday night and you can always catch Frog and Toad Friday nights at Elkmont Exchange. Sunday is the biggest jazz day with jazz brunches at Downtown Grill and Brewery and Chesapeakes. Maple Hall is running a Latin Jazz series in June and Bistro at Bijou finishes the day with an early jazz show.

I’m all for lots of kinds of music and I think we could use more venues focusing on a range of genres that are under represented. That said, nothing says “urban” and “city” like jazz. At least in my head. And I’m glad we’ve got lots of it scattered around the city. I hope it remains as plentiful for a long time to come. And Monday nights? We’ll that’s an opening for hanging out at home and pulling out some vintage jazz vinyl or simply saying, “Alexa . . .”