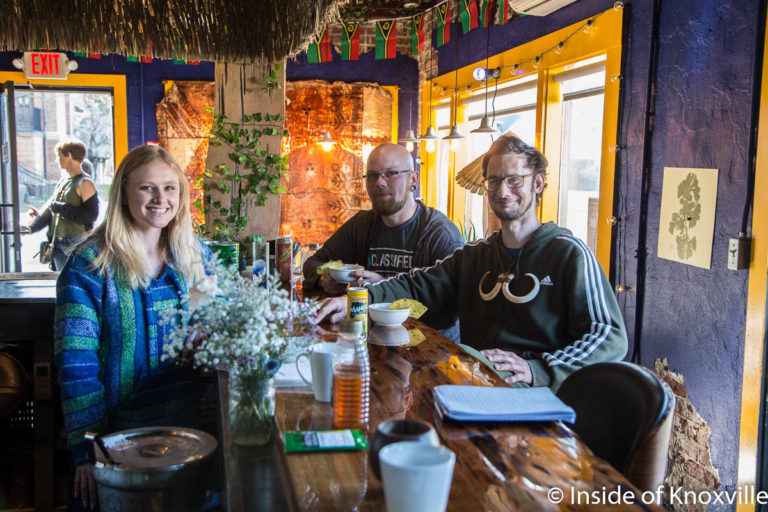 Last November Noble Kava opened quietly at 1328 North Broadway, with a grand opening following after the beginning of the year. Their product line is quite different from anything else offered in Knoxville and that’s led to some confusion and maybe a bit of misunderstanding. I met with owner, Andrew Procyk, to learn more about the business and the person behind it..

Andrews parents were born in Poland and Ukraine and when he was born in Chicago, he became the first generation American in his family. They moved to Florida before his teens and he attended Florida State University where he earned his undergraduate degree in Sociology and Philosophy. He earned an MA from Florida Atlantic in Sociology with a focus on drugs in society, social movements and the labor economy. His career would follow those themes.

He taught at Florida Atlantic for a time, but when his daughter was born, he felt the need to earn more money and he wanted to open a business. First considering a Cuban restaurant, his wife suggested he open a Kava bar. By 2008 Kava was appearing at a few places around the country, including the Miami area where there were a couple of the bars near where he taught.

He opened Noble Kava in south Florida and he thinks it was the tenth Kava bar in the United States. Andrew had become fascinated with Asheville with its four schools of herbal medicine and in 2010 decided to move the family and the business there. They held a soft opening in April 2010 and in 2014 opened a second location in Boone, North Carolina.

The Knoxville location is the third, and its success Andrew attributes, at least partially, to the provision of an alternative. “Kava is a great alternative to alcohol. There’s no paranoia or hangover. It won’t keep you up all night like coffee.” He said that was really borne out in Asheville where the thriving beer scene has driving a lot of tourist traffic. He said that their customer base was 95% “local people looking for an alternative to the beer scene.”

He doesn’t attempt to hide the fact that the tea is bitter, saying virtually no one likes the taste. It is chased with a piece of fruit or a fruit drink to offset the bitterness. What follows is a calm sense of happiness. He turns to science, quickly leaving me behind, “It works on the same receptors as benzodiazepines.” That would be a class of drugs most frequently used to treat anxiety. A quote he heard and likes to repeat is that is like, “mild liquid valium with happiness attached.”

That said, he states that “you don’t get a wrench in your mental works.” It’s a good substitute for coffee at night, he says, pointing out that a bowl of Kava mellows a person out about as much as a cup of coffee ratchets them up. That makes it not a great morning drink if you’d like to accomplish much with your day. He also points out that it takes lactic acid from muscles and has other benefits, though the FDA is tightly regulating any health claims as it has not been evaluated. It is currently classified as a nutritional supplement.

He made the point that Kava Tea sold in places like Whole Foods is not the same as the manually squeezed Kava you’ll find at Noble Kava. The former, he says, has a gram or two of Kava and that gets diluted in the boiling process of making the tea. In the shop, you’ll get 8 to 10 grams of Kava in a bowl.

Kratum is also offered at Noble Kava and it has a very different effect. Kratum is a tree found in southeast Asia. Taken in small amounts it causes a stimulant effect similar to coffee. While controversial, it is legal in the U.S. and has strong advocates who feel it offers significant (if unverified scientifically) benefits.

In short, Andrew says the store has “pretty much any kind of plant that has beneficial effects and that customers want.” He says he tries to stick to what has a demonstrable impact. Kratum, for example, is related to coffee and has a similar impact. Additionally, it seems to have analgesic properties.

Kava is served “by the shell,” referencing the coconut shells in which it has been traditionally served. The shop has literal (and beautiful) coconut shells for first-time users, though most bowls used are ceramic. They also offer a full range of black teas, green tea and matcha. He tries to get as much directly from producers as possible, traveling often to Vanvatu on the Tanna Island and Isaka. He loves the place and the people and says if the Kava business were to end, he would still want to keep contact with the people he has gotten to know there.

There are warnings involved and posted in the shop: “Those with pre-existing seizure conditions should not consume Kratum,” and “Do not use kava if pregnant or nursing, suffering from chronic depression or if exhibiting tremors or nerve disorders.”

The other locations feature live music and other events and he has hopes of expanding the current location in order to be able to do the same here. He noted that the Asheville Noble Kava has the longest-running open mic in Asheville. He will also soon offer a number of CBD products. 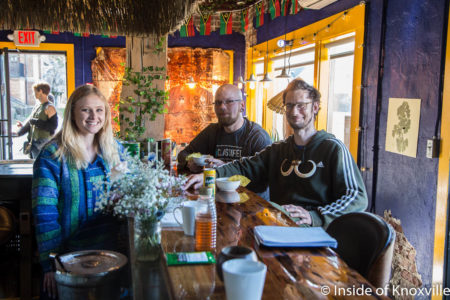 I asked him if there was anything we hadn’t covered which he’d like to include and he said, “The crisis of capitalism in western society.” He laughed and said, “Put that in there,” before adding, “I’m trying to make the biggest difference I can in the world I come into contact with.”

If you drop by, be sure to check out the gorgeous cyprus bar handmade by Andrew. The establishment opens at noon each day and is open to midnight, seven days a week.