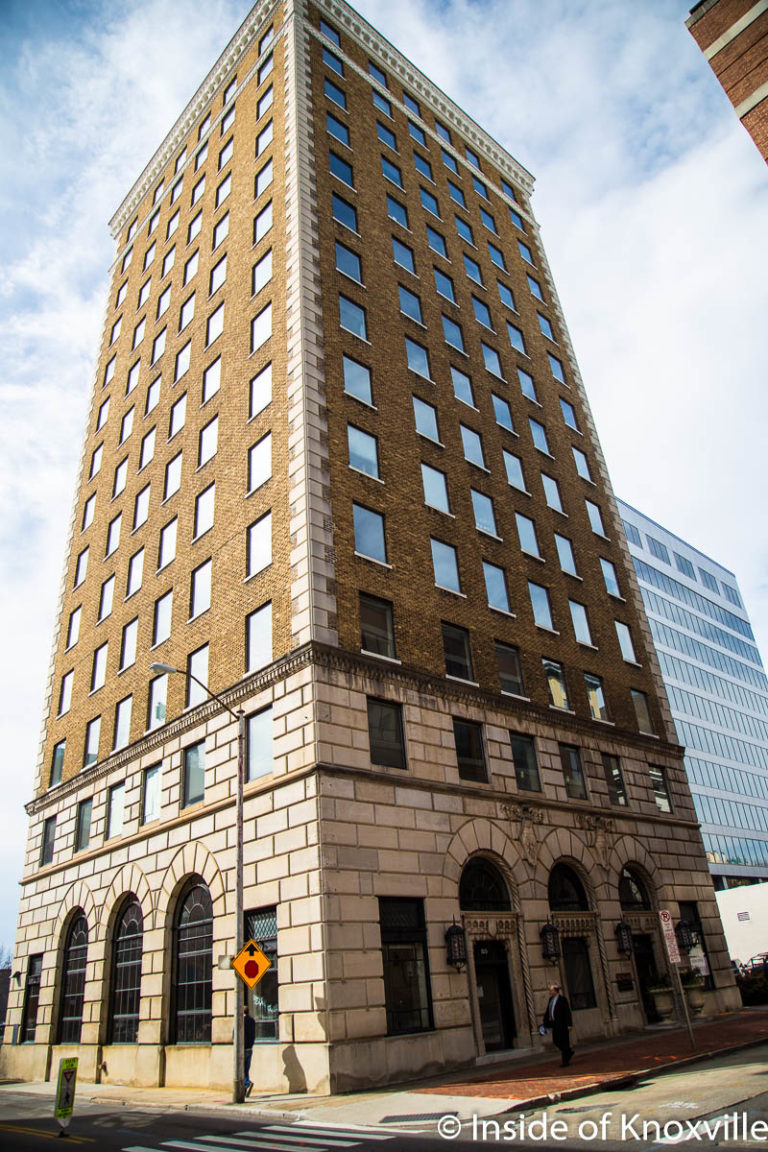 First Century Bank is relatively new to downtown Knoxville, but it’s been around (officially) since 1899. President and CEO Rob Barger says they have records that indicate it was doing transactions even earlier. I’d noticed they moved into one of my favorite downtown buildings at 625 Market Street and when branch manager, Jeremy Loftis, contacted me saying they were a very different kind of bank, I was intrigued.

Banks are undergoing tremendous change in the current economy. Most people use tellers less than ever with remote deposits, ATMs and automated payroll and payments making it less necessary. The Wall Street Journal reported that in the twelve months ending in June 2017, 1700 branches closed in the U.S., the biggest decline on record.

The value of real estate can also make large branch locations impractical. A local developer told me he converted many former banks to restaurants and residential space in London. It may be a trend that gets replicated in U.S. cities as real estate inflates and banks need fewer people and less space. Why pay for unneeded space?

Enter First Century to the downtown market. Walk into the lobby of the building and you’ll find one or two tellers in one corner of the small lobby and no other evidence of a bank. Neither teller has a cash drawer, with a cash recycling system for depositing and dispersing cash similar to an ATM.

The remainder of bank offices are located on the tenth and eleventh floors, which is where I sat w with Mr. Barger to talk about the bank and how it came to locate downtown. He explained that the bank is based in Claiborne County where it originated. They have branches in Tazewell, New Tazewell, Harrogate, Sneedville, Maynardville, Maryville and Knoxville.

The Oak Tree emblem is a reference to Mr. Barger’s grandfather, Glenn Yoakum, whose death in 1990 was reported in the local paper with the caption, “A Mighty Oak Has Fallen.” His grandfather went to work for the bank in the 1930s, left to fight in World War II as a member of the Navy, and returned to the bank after the war. The bank had five employees at that time and Mr. Yoakum eventually became president and, later, majority stock holder, owning 80% of the bank.

Upon his death, Mr. Barger’s mother and her two sisters inherited the bank. His mother who had been a speech and language clinician, transformed into a banker and is now the Chair of the Board. Rob did not simply inherit his position. He earned a degree in Political Science with a minor in Business from UT in 1996.

Though he’d worked for years in the bank through high school and summers in college, he felt he needed to work at another institution for the growth it would offer in an environment where he wasn’t the owner’s son. He went to work for Fred Lawson at BankFirst and, in an interesting irony given his current location, it was in the basement of the building his bank has now branded.

He worked there for two years (where he met Rex Rauhuff who is now Executive Vice President of First Century Bank) before leaving to manage his family’s new branch in Knoxville on Emory Road. In a leadership Knoxville class in 2017 he met Brenda Wood who mentioned that BankFirst was moving from 625 Market Street and that her son, John Trotter, owned the building.

He contacted John who said he wanted something with a small footprint in the lobby so that he could develop the remainder. Rob wanted a very different kind of bank and that appealed to him given the reduced customer usage of tellers. They agreed the bank would take two upper floors and would be awarded the signage rights on the building and they moved in.

The group is big on downtown history. The historical photograph of the building you see here is posted prominently on one wall. The General Building, constructed in 1923, is the only high-rise designed by Charles Barber. A historic map of Knoxville is in the upstairs lobby and a photograph of the Market House on Market Square forms the background to the tellers on the first floor. He noted that the Market House is framed in the direction where it once sat.

Mr. Barger said it felt like the right time and the right place to be downtown. While he’s always liked it, he has fallen in love with it in recent years. The bank has also had a role for years in funding local developers for downtown projects. As a community bank, they aren’t prevented, like most banks, from giving loans on projects that haven’t yet sold a certain percentage of their units. It’s a difficulty developers commonly face.

The bank is partnering with downtown businesses. For example, they are distributing cards for a free cupcake at Cafe Four and reimbursing the restaurant for every card redeemed. They’ve also established a program to donate $50 to a charity of the client’s choosing for every account opened (customers choose from a list that includes Honor Air, Restoration House, Sertoma Center, Change Center, Love Kitchen and soon they plan to add the Downtown YWCA).

Mr. Barger says he feels the donation program speaks to who they are. They used the building for the Over the Edge rappelling event last summer, which benefits Restoration House and they’ll also host it this coming year. If you were there you may remember Internal Auditor Tina Cline dropping dollar bills as she descended. Mr. Barger rappelled that day, as well. You’ll also see their name on the Market Square stage as they are the Key Sponsor for Variety Thursdays.

You may also see employees using their branded Segway to scoot around the downtown area. It’s not exactly what you expect from a bank. Stop in and look at the beautiful design of their space in the lobby.