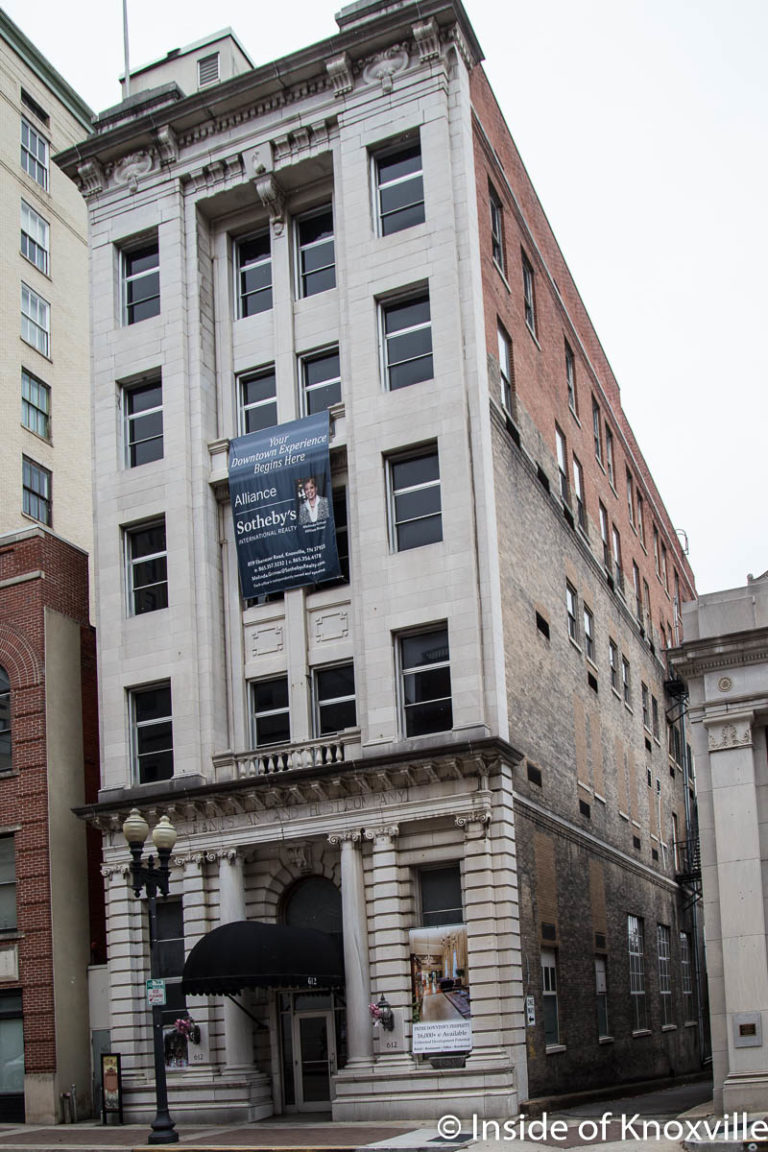 It’s a special building inside and out and contains quite a bit of history. The first three stories were built in 1881 and reconstructed in 1907 and the top two floors were added in 1923. Added to the National Register of Historic Places in 1983, its Second Renaissance Revival style marble facade is one of the most striking downtown.

It’s walls have seen productions by Cas Walker, performances by the Everly Brothers and a bit of production in the movie “October Skies.” Knoxville’s most famous shoot-out happened just outside its doors. The story of that gun fight was written, most famously, by Mark Twain in his “Life on the Mississippi.”

In 1994 married couple Doug Toppenberg and Elaine Burke purchased the first floor where they have practiced law for the last twenty-five years. They subsequently purchased the second, third and fourth floors in 2014 when Revenue Recovery Corporation moved from downtown. The first floor (and mezzanine), as you can see from the photographs, is an opulent, finished space. The other three floors are shells awaiting development.

The floors have been on the market for some time, and late last year the Tennessee Theatre stepped in to purchase all four floors, closing last week. With that, they became the owners of the lower, finished floor, as well as the three floors which will require some finishing to be usable.

I spoke with Executive Director Becky Hancock who said the theater is very excited about the possibilities presented by the building and they see it as an answer to some of the limitations of the the theater. Initial plans call for using the finished space to “improve the patron experience.” She gave examples of patron groups that have to meet or have events in the foyer of the Tennessee, explaining that they are using the theater for purposes well beyond its original intent.

She also said they want to “use the new space to develop future audiences.” Exactly what form that will take is uncertain at this time, though she indicated they have ideas they aren’t ready to discuss and they are still exploring possibilities. They are working with Partner’s Development for a design team leading up to construction in the three floors.

In the shorter term while that’s being sorted out, the bottom floor is ready for use as a private reception space for groups like the symphony, opera or sponsors. A number of groups who use the Tennessee Theatre like to do a private event before or after the production and they’ve not really had an option until now.

Meanwhile, the sale underscores several points about downtown: The arts in general, and the Tennessee Theatre specifically, are doing well. Once-abandoned properties are finding their uses. It’s a time of growth and redevelopment in the city and we clearly live in a very special era in downtown Knoxville.